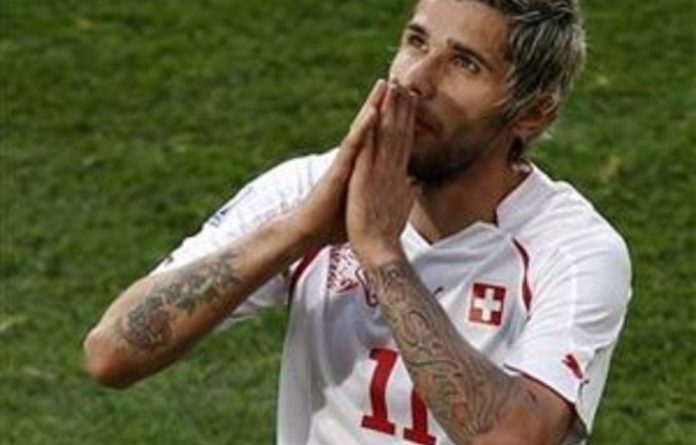 Chile kept their place at the top of Group H with a bitterly fought 1-0 win over a stubborn 10-man Switzerland on Monday.

Second-half substitute Mark Gonzalez headed home a cross from Esteban Paredes with 15 minutes to go to finally break down a tight Swiss defence that had earlier broke Italy’s World Cup record of 550 minutes without conceding a goal.

The match lived up to its billing as an ugly midfield stalemate, with the Swiss crowding out the centre of the pitch and smothering Chile’s free-flowing attacks, even after having Valon Behrami sent off in the 31st minute for violent conduct.

The draw left Chile top on six points, followed by Switzerland on three then Spain and Honduras, who are both without a point and play later on Monday in Johannesburg.

Chile attacked the Swiss continuously and had their first chance after 10 minutes when Swiss keeper Diego Benaglio was forced into a superb double save from Arturo Vidal then Carlos Carmona from long range.

Alexis Sanchez tested the Swiss defence early on, outpacing Reto Ziegler on the wing and cutting back to the oncoming Humberto Suazo, the top scorer in South American qualifying, who missed the ball completely.

Switzerland were reduced to 10 men after the half-hour mark when Behrami was adjudged to have elbowed Vidal, who slumped theatrically to the ground clutching his face.

Chile thought they had broke the deadlock soon after the break when Sanchez’s strike from 25m deflected off Matias Fernandez and into the net but was ruled out for offside.

Chile almost found their goal on 54 minutes when Sanchez dispossessed Stephane Grichting on the edge of the area but was denied by Benaglio as Chile battled to find the winner and clinched it with 15 minutes left. — Reuters