What now for Bafana? 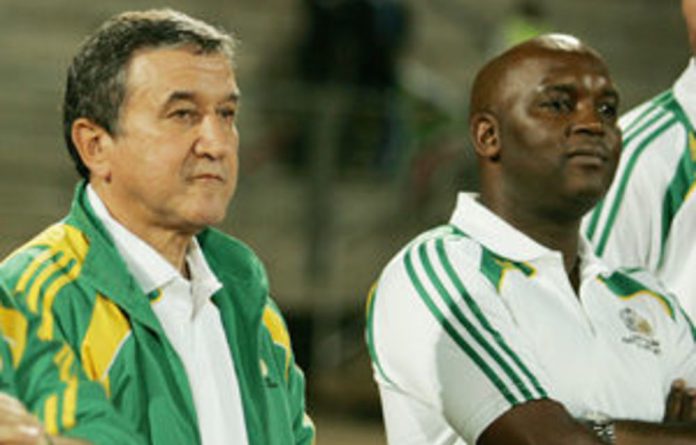 While Safa president Kirsten Nematandani was on Tuesday keeping mum on who was to replace Carlos Alberto Parreira as Bafana Bafana coach — the smart money appears to be on his assistant Pitso Mosimane moving up.

And if Mosimane, as seems highly likely, does take over the reins, then Bafana fans should expect some attacking fireworks in the matches to come.

Mosimane told the Mail & Guardian after Bafana’s 2-1 defeat of France in Bloemfontein — Parreira’s final match in charge of Bafana Bafana — that he was “positive” about taking up the reins of the national football team: “Well I am positive, I think I will be appointed because I am positive, but as I always said, I’ve never gone out in newspapers campaigning — if it comes it comes. If it doesn’t come it was meant for someone else.”

Breeding strikers is vital
On Bafana’s future, Mosimane said breeding strikers was vital to the team’s future success. Saying that South Africa had reasonable depth in midfield and defence, he also hinted at a more attacking brand of football from the team in the future: “Upfront there, we need a little bit of exploration, and maybe changing the way we want to play to have more power upfront. Because it’s not all about two strikers, we might have three strikers, because we’ve seen now in the world a new formation: 4-3-3 is a new change. Each and every World Cup brings a new successful formation, and 4-3-3 is this tournament’s.”

He also emphasized the need for SA to concentrate on development to ensure the future success of the national team.

More pressure, more confidence
Commenting on the game, Mosimane said that Bafana’s pressure and aggression were instrumental in the team’s success — both on the day and in the future: “You need more chance making to score, more chances, more aggression. When we played with more pressure, we created more corners and it gives you confidence that you can win — unlike the match before this one [when SA lost 3-0 to Uruguay in Pretoria].”

This confidence was evident against France and at halftime, a fiery Bafana Bafana were 2-0 up against a 10-man France team.

There was belief that, with things going South Africa’s way in the other Group A match in Rustenburg, Bafana could overhaul the five-goal-difference deficit needed — with two more goals in the second half — to qualify from Group A for the knock-out stages of the World Cup.

Bafana created a flurry of chances, but, ultimately, it was not to be. While this was a match of several historic firsts — South Africa’s first win in a World Cup, the nation’s first win against France and coach Carlos Alberto Parreira’s first World Cup win with any other side apart from Brazil — Bafana eventually ran out 2-1 winners. Level on points with Mexico after their 1-0 loss to Uruguay, they did not proceed from Group A into the knock-out phase of the competition — becoming the first hosts to do so — because of an inferior goal difference.

But in the end, Mosimane was philosophical: “I’m not sad because the coach is leaving, I’m sad because we didn’t make it to the next round. We’re back to where we were with our history in the World Cup, but I would say it was good to end with a win against France.”

Banyana have failed to live up to expectations, while Bafana might just be finally coming good
Read more
Advertising
Continue to the category
Education