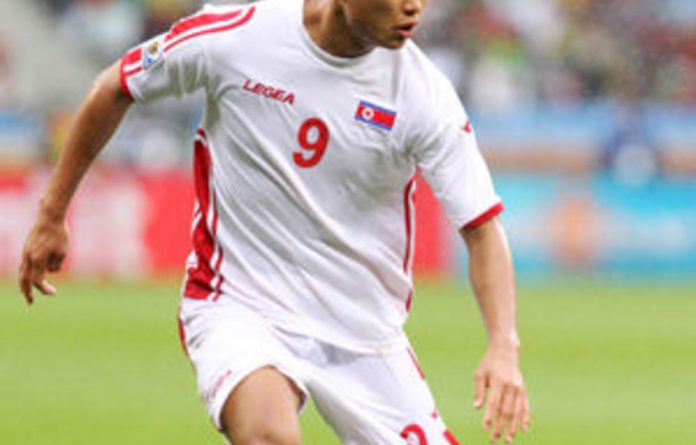 North Korea’s star striker Jong Tae-se admitted on Thursday that he had spent the day after the 7-0 World Cup Group G hammering by Portugal in a state of shock.

However, the 26-year-old — born and bred in Japan and who plays for J-League side Kawasaki Frontale — said that having pulled himself together he was determined to go out on a high with victory over Côte d’Ivoire in their final group match on Friday.

A respectable 2-1 defeat by five-time champions Brazil was followed by the Portuguese nightmare which also ended any hopes the North Koreans had of emulating their compatriots who reached the quarterfinals in 1966 — before going out to Portugal.

However, a defiant Jong said that he and his team-mates had no intention of bowing out quietly.

“Our World Cup is not over yet,” he said in the first entry in his blog after the collapse against Portugal.

“The Portugal game was such a crushing defeat as you all know.

“We showed how clumsy we were, amid growing expectations due to our good performance against Brazil.

“I spent almost a whole day with blank eyes because of the mental shock that was tens of times greater than what I felt after the Brazil game.

“But I am writing now to put it behind me and prepare for the next match,” added Jong, who has played for Kawasaki Frontale since his graduation from an ethnic Korean university in Tokyo in 2006.

Jong, nicknamed Asia’s Wayne Rooney or “People’s Rooney” for his combative style, conceded that the Didier Drogba-led Côte d’Ivoire — who still have an outside chance of reaching the last 16 should they score a hatful of goals and Portugal lose badly to Brazil — be too strong for them but that they weren’t going to simply put their hands up and surrender.

“Our next opponents, Côte d’Ivoire, may be too much for us in terms of capability. But I want to put my heart and soul into taking three points,” he said.

“That is how we can repay everybody who has been supporting us in this tournament.”

Jong, who has been linked with a move to German side VfL Bochum as they seek to return to the Bundesliga, has scored 15 goals in 24 internationals since making his debut in 2007.

He holds South Korean nationality like his father, who is a descendant of immigrants from colonial Korea.

But he managed to obtain a North Korean passport after attending patriotic pro-Pyongyang schools in Japan at the urging of his mother who has been loyal to the North. — AFP