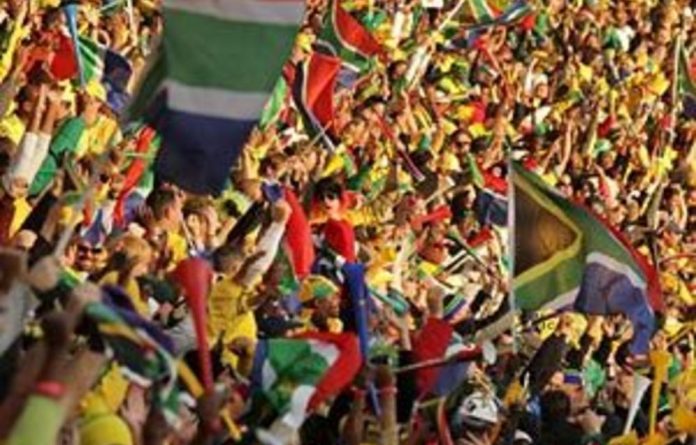 We all got high on the Bafana euphoria and bought into the collective delusion that it was all going to be okay. And it’s exactly that kind of insanity that keeps the country sane

South Africa is a schizophrenic country. And nowhere was this more apparent than on the drive on the N1 from Johannesburg to Bloemfontein on June 22 for what was, ultimately, a 2-1 Bafana Bafana victory over France — enough to restore national confidence but not enough to see the team through to the knock-out stage of the World Cup.

The national personality is too often reduced to tourist-brochure smiles and toothy happiness when the reality is much closer to the Free State landscape — a beautiful austerity and melancholia that is part of our beings, too.

A resident inner torment is recognised in places with names like Dam van Trane (dam of tears) and Verkeerdevlei (wrong vlei) near Bloemfontein.

It’s the torment that propels the national psyche to optimistic delusions and the mainlining of euphoria — all to counter the unresolved pain South Africans carry from centuries of personal tragedy hidden among the grand narratives of apartheid, colonialism, Great Treks and underdevelopment in a time of democracy.

So on the wintry day of Bafana’s match against France, the despondency of losing 3-0 to Uruguay earlier in the tournament had lifted.

Even the mammoth task of overcoming a five-goal deficit by beating the team derisively renamed Les Miserables (because of their own recent strife, including a player insurrection led by captain Patrice Evra against coach Raymond Domenech) and still needing a result from the Uruguay versus Mexico match in Rustenburg, all appeared a trifling concern.

Instead, South Africans were vociferously optimistic. From President Jacob Zuma — who was hoping for a “miracle” — to the gogos who lined barbed-wire fences with flags and messages of support and, especially, the middle classes.

Callers to radio stations — perhaps misguidedly buoyed by Portugal’s 7-0 thumping of North Korea — were confident of a tournament-progressing victory. Vuvuzelas blared from the shiny Gauteng cars lining up at toll gates en route. Everybody was supporting Bafana Bafana.

Mass delusion in full swing
In Bloemfontein the mass delusion was in full swing: “I’ve just driven all the way from Cape Town and got here two hours ago. Gooo Bafana!” exclaimed a preppy rugby-type at a pub near Free State Stadium.

He’d never been to a local football match before, but felt that the “World Cup and Bafana are bringing the country together”.

Would he go to a Premier Soccer League match next season? “I don’t know — the standard is not very high,” he confided.

Sporting events like the World Cup are, arguably, about the middle classes feeling part of a country they are otherwise completely dislocated from with their gated communities, private healthcare and exorbitantly priced schools.

For 90 minutes, and the duration of the piss-up afterwards, they can share in the joy, and pain, of a majority they are otherwise oblivious of.

But would the World Cup make South Africans comprehend themselves and one another better? The Mail & Guardian posed this question to several people.

The standard response from white people was that they were young during apartheid and shouldn’t still have to carry the blame for it: “Let’s just move on,” they say. Black people generally dismissed football’s current infiltration by the middle class as nothing more than a passing fad.

But South Africans like to believe in the miracle — it’s integral to our sanity.

And, inside Free State Stadium, Bafana Bafana were doing everything possible to feed the God Delusion that had preceded the Battle of Bloem — just days after the anniversary of the Battle of Waterloo.

South Africans had taken to prayer meetings and attending church with their vuvuzelas in the build-up to the match, and the sense of a preordained destiny struck home as hard as Bongani Khumalo’s thundering header, which sent South Africa 1-0 up in the 20th minute of the match.

At half-time Bafana were 2-0 up, with France in disarray and down to 10 men after the sending off of Yoann Gourcuff for an elbow of MacBeth Sibaya.

Uruguay, meanwhile, were 1-0 against Mexico.

Two more goals from South Africa and the World Cup hosts would qualify for the knock-out stage of the tournament.

Delirium and depression
But we like teetering on that fine edge between delirium and depression. We revel in the heroic tragedies of Xhosa chief Makana, who drowned trying to escape Robben Island in the 19th century, or Allan Donald’s run-out in the 1999 Cricket World Cup semifinal against Australia.

South Africa allowed France back into the game in the second half and eventually ran out 2-1 victors — not enough to live to fight another day.

But there were celebrations in the streets of Bloemfontein afterwards. And, perhaps, there was no more apt summation of our visceral experience, as a nation, than the sight of former Springbok rugby captain Bobby Skinstad drunkenly dancing in the Mystic Boer.

Skinstad, wrapped in day-glo yellow overalls with “Bafana” printed on the back, moved completely out of synch to the music that was playing. But he was smiling.

Bullets also fired indiscriminately at people in the inner city, homeless or not
Read more
Africa

During Cyclone Idai, responses were hampered by a shortage of reliable information. This has worrying implications for dealing with the Covid-19 pandemic
Read more
Advertisting
Continue to the category
Business