Ministrations of the hammam 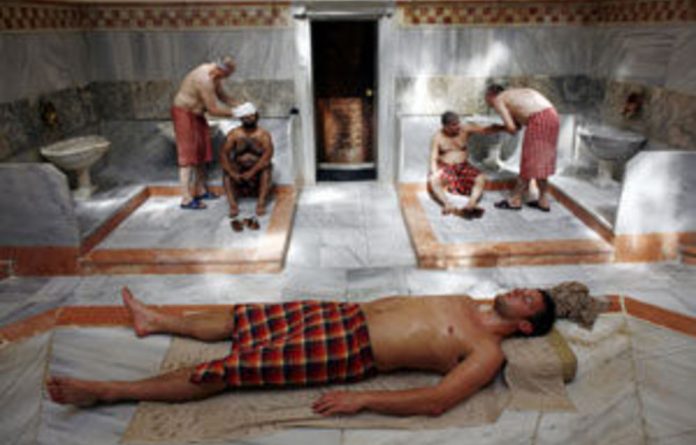 Fancy a scrub? If you want the real deal, try a muscular, tattooed masseur in Aleppo, writes Kevin Rushby.

It’s impossible to have a decent bath west of the Bosphorus. And by a bath, I mean a proper dousing in scalding hot steam and water, a vigorous scrub, a violent massage and a long, gentle recline with a glass of sweet tea and a hookah pipe. Istanbul, it’s true, has a few grand establishments, but the languid, slow-moving culture of the oriental hammam has been sadly eroded. No, the modern traveller has to go a little further, maybe to Syria. That was where I chose: Aleppo, the ancient Silk Road city.

My mission, once ensconced in the town, is to locate the best baths. The guide book recommends the Hammam Yalbugha near the citadel, but it’s closed for repairs and looking as though it may not open for a long time. That’s a shame as it is said to be the most architecturally spectacular.

Sitting on the wall outside the citadel, I get quite a crowd of advisers debating where I should go. The first choice, Hammam al-Bayada, is another failure. I am chased from the foyer by the bathkeeper: “This is ladies’ day!” There is no mixed bathing, of course, unless you possess a harem and I haven’t brought mine.

Vast bazaar
My guides point me in the direction of another choice: “You want Hammam al-Nahasin, in the souk.” Entering through a cave-like door near the citadel, I am swallowed up by Aleppo’s vast covered bazaar. This massive, many-headed beast is not somewhere to pop into for a pint of milk. It’s more like a world in itself. People live here. Donkeys spend their entire existence in it.

You can grab a local speciality — kibbeh burghul (balls of meat, pistachios and bulgar flour) — and wash it down with fresh pomegranate juice. You can have a haircut and get measured for a wedding or a funeral. You can buy timeless fashion accessories such as Kurdish pants — they grip your ankles but allow plenty of air to move above, with four metres of heavy woollen cloth in the waist. Then there are spices, coffee, rugs, frilly dresses, wigs, scarves made from antelope hair …

“Do they kill the antelopes to get the hair?” I ask. The shopkeeper smiles sweetly. “You’re so charming. Are you gay?” That’s another thing. I’ve never been propositioned so many times anywhere. (It is very illegal, so if that’s your thing, take care.)

Hammam al-Nahasin is on one of the many side arms of the beast. A rather homely pine door leads to some steps down into a large vaulted hall. In the centre are tables stacked with red-and-white checked towels and sarongs. Around the sides are booths, carpeted and cushioned, all filled with dozens of youths watching television. It is one of the few modern developments in a place that has been operating for about 800 years, ever since towels were invented. (A great side trip from Aleppo is to Hama, 140km south, where you can see the ancient art of towel-weaving in operation at the Al Madani family workshop.)

The works
I choose to have the full works and receive a bar of soap plus a mizar (sarong) and manshafa (towel/scarf). Changing into my gear, I amble through a side door into the building. To my surprise, it is empty. Everyone is watching the film. There is a series of domed rooms with niches and benches, some larger than others. The building is clearly ancient, but modern white tiles have been thrown over everything. The once-beautiful water chute is out of use. In the main domed hall is a huge stone bench and behind it is the steam room. I sit in there and soak it up. I soak it up for quite a long time.

Eventually I go out and bellow: “Haya! Gad jaahiz!” My Arabic is rusty, but I hope this loosely translates as: “Oi! I’m ready!” After a further 10 minutes, presumably time for the film to finish, I hear the outer door open. A bare-chested man ambles in carrying a large copper pot, an enormous sponge and some intimidating items that look like oversized Brillo pads. This is the mukayyis, the scrubber. He is wearing just a mizar and some tattooes. One on his right arm reads, in English, “Leave me alone”.

“Where did you get that?” I ask brightly. Scowling, he directs me into one of the domed recesses. “Sit down.” I do so. He throws several pots of warm water over me. His left pectoral, I notice, is inscribed with the message, “Death or Freedom”. His left upper arm has a worn and faded image: Once possibly a female figure, it now resembles a corpse after a dose of Napalm. Undoubtedly, I think, this is the right jinni (genie) for the job.

He sets to with a scourer on my legs and feet. The abrasion comes with powerful squeezing of muscles and by the time he gets on to my torso I’m already in that weird rag-doll state of being pummelled into submission. He does my armpits with the same intensity. Then he pinches the flesh on my back, grunting with effort, working his way up to my head like a giant lobster. I lose sense of time. I turn over when slapped. My eyes close. The process is punctuated by sudden douches of hot water. Then, with a final dismissive splosh, he steps back, still grimly unsmiling, to make way for a second character, the munashfi.

This tiny man, barely 1.52m tall, is dressed in football kit and a huge pair of sea boots. He is, by contrast with his colleague, very cheerful and gentle. If the hammam were a Greek tragedy, and in some ways I think it is, this man’s entry is the peripeteia, the moment of dramatic reversal that marks the beginning of catharsis.

He smiles and talks softly, shampooing my hair then wrapping me in towels and leading me outside to be plied with tea and tobacco. I lie in a booth, empty-headed, skinless and blissful. Slowly, very slowly, words and pictures begin to assemble themselves inside my mind into something resembling what is commonly called “thought”. I dress and leave, walking at the speed of a zombie on tranquillisers. I drift around the souk, unable to summon up the energy to leave.

Making an escape
Eventually I escape and make my way to the Jneina part of town, where lies the Beit Sissi restaurant, reputedly the best eating house in town. I try the kebab labania — lamb with yoghurt — and the local red wine. A violinist plays bittersweet Syrian folk tunes and strange reworkings of Puccini to ecstatic applause from the tables.

The restaurant is a dark and dreamy throwback to when Agatha Christie haunted Aleppo, waiting for her husband, Max Mallowen, to finish his archaeological digging. There are cabinets here, filled with curiosities; maybe Mallowen dug some of them up. An old man with a cane and handlebar moustache talks to me energetically, explaining each item. His words are lost in the wailing violin, but I don’t care, and nod gently at everything he says. Later I head back to my hotel, determined to recover the power of speech by the following morning.

“Are you okay?” asks the receptionist, peering into my face. I nod, trying to form some words. Time passes. His face lights up. “You went to the hammam?” I nod. He smiles. “I will send tea for you.” —

​Ravaged Aleppo shows off its wounds