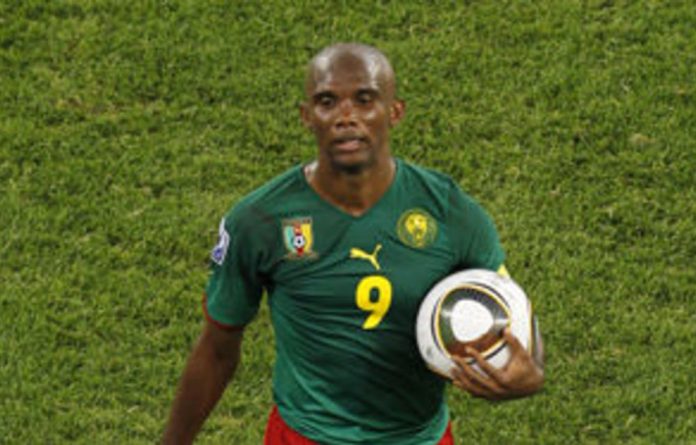 When Samuel Eto’o called Cameroon’s exit at the 2010 Soccer World Cup the biggest disappointment of his career, the three-time African Player of the Year knew it had been his last chance to impress soccer fans.

Eto’o, Côte d’Ivoire’s Didier Drogba and Nigeria’s Nwankwo Kanu, were relishing the opportunity to make a mark at the first World Cup to be staged on the African continent. Instead, they left deflated with their tails between their legs. Drogba and Kanu had already said this would be their last World Cup and it now seems that Eto’o may not be too far from retirement.

With an Olympic gold medal, two African Cup of Nations medals, three European Champions League crowns and League and Cup glory in Spain and Italy, Eto’o is arguably Africa’s most decorated player of all time. Last month he became the first player to win back-to-back trebles in European football.

The 29-year-old, however, thrice failed to help Cameroon reach the second round of the World Cup. In fact, not since 1990, when they made it to the quarterfinals, have the Indomitable Lions gone beyond the first round. Eto’o’s three World Cup appearances have yielded only two goals.

“All my season was to be ready for this World Cup,” said the Inter Milan forward after Cameroon’s loss to Denmark sealed their fate. “It’s hard. It’s not normal for us to finish last.”

Eto’o’s remarks could be used by Drogba. The passionately patriotic Ivorian striker inspired Chelsea to a League and Cup double last season, and he was expected to translate that form into the World Cup. However, an elbow injury in a World Cup warm-up match against Japan virtually ended the Elephants’ chances of progress to the second round. Although Drogba featured in matches against Portugal, and favourites Brazil, he was far from full fitness.

He can count himself and Côte d’Ivoire unlucky to have been drawn in ‘Groups of Death’ at their only two World Cup appearances. Four years ago, they failed to negotiate a group that featured Argentina, Holland and Serbia. In South Africa, Portugal and Brazil were always going to be difficult opponents. Drogba’s staggering international goal scoring record of 45 in 70 matches includes just two World Cup goals.

Little was expected of Nigeria’s veteran, Kanu. For all his silky ball skills, it was apparent that his inclusion in the Super Eagles World Cup team was mostly sentimental. Still, Kanu displayed some of the old magic when Lars Lagerback handed him a rare start against South Korea.

His 58-minute performance showed why, at his peak, he was rated among Africa’s finest players of this generation. Age and a lack of playing time for club and country ensured he was kept on the fringes in Group B. It will most probably be one of Kanu’s last appearances on the pitch and Nigerians will be debating whether their aged star should have brought on earlier by Lagerback to make a difference.

It remains to be seen whether stars like Kanu, Drogba and Eto’o will make it to the next World Cup. The African continent’s powerhouses must now breed new talisman for the 2014 tournament in Brazil. — TwentyTen