Brazil cruise into quarters with 3-0 win over Chile 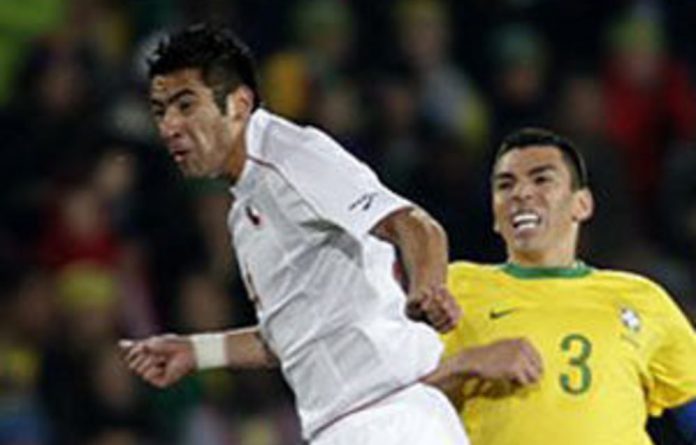 Brazil produced their best performance of the World Cup so far to crush Chile 3-0 on Monday and set up a mouth-watering quarterfinal against The Netherlands.

Juan and Luis Fabiano scored before the break and Robinho added a third just before the hour in a superb all-round performance from the five-times world champions.

Luis Fabiano’s strike was the pick of the goals, coming after a delightful interchange of passes involving fellow forwards Robinho and Kaka.

For the first half-hour, the match was surprisingly even. Chile looked far from overawed and the best of Brazil’s few chances came from a curling Gilberto Silva effort from distance that Claudio Bravo turned round his left-hand post.

Kaka, back from suspension after missing the goalless draw against Portugal, was booked for a foul on Arturo Vidal, and Brazil were largely frustrated by a disciplined Chile defence.

But after 34 minutes, Brazil broke the deadlock from a set-piece. Maicon sent over a corner from the right and fullback Juan rose at the back post to plant an unstoppable header high into Bravo’s goal.

Four minutes later Luis Fabiano added the second, and this time it was vintage Brazil.

Robinho cut in from the left flank and fed Kaka, whose delicate pass split Chile’s two central defenders to put Luis Fabiano in on goal. He rounded the keeper and stroked the ball home for his third goal of the tournament.

Chile coach Marcelo Bielsa threw caution to the wind, substituting centre back Pablo Contreras at halftime and replacing him with attacking midfielder Rodrigo Tello, but it made little difference.

After 59 minutes Ramires surged through the heart of the Chilean midfield and laid a short ball to Robinho, who curled a right-foot shot past Bravo to make it 3-0.

Brazil will face The Netherlands, 2-1 winners over Slovakia earlier in Durban, on Friday for a place in the last four. – Reuters

The murder of Fikile Ntshangase in KwaZulu-Natal was not an isolated incident. Around the globe, from Nigeria to Brazil, environmental activists are similarly being silenced, and it is our duty to continue this struggle
Read more
Business