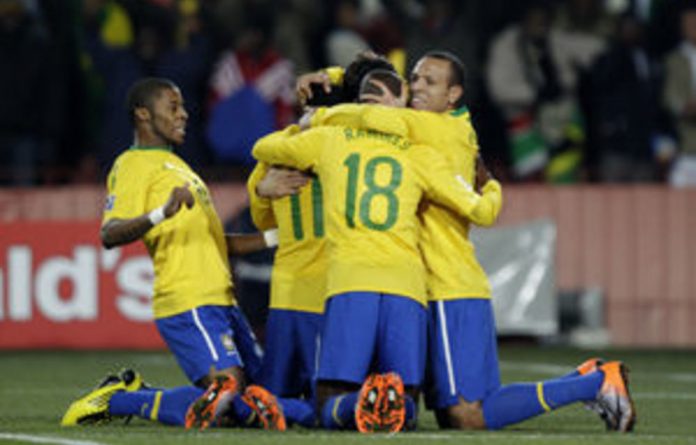 Brazil swept into a World Cup quarterfinal showdown with The Netherlands after a clinical and uncompromising 3-0 victory over Chile at Ellis Park on Monday.

Bert van Marwijk’s Dutch side saw off Slovakia 2-1 earlier in the day, with star winger Arjen Robben marking his first start of the tournament with the opening goal.

The sides will meet in Port Elizabeth on Friday, in a repeat of their 1998 semifinal encounter in France, which Brazil won on penalties.

The Selecao went on to lose to the hosts in that year’s final, but they look on track to capture a record-extending sixth World Cup title after handing Chile the fate of the first South American side to be eliminated from the competition.

Entertaining for neutrals
Chile had charmed neutrals with their enterprising play in the group phase, emerging from Group H as runners-up behind Spain.

They took to the field against Brazil with the same sense of endeavour but were undone by goals in the 34th and 38th minutes and never recovered.

Roma centre-back Juan put Dunga’s men in front when he rose to convert Maicon’s corner with a thumping header, before Kaka adroitly set up Luis Fabiano to round Claudio Bravo and tap the ball into the unguarded net for his third tournament goal.

Marcelo Bielsa’s side continued to attack gamely but they were undone once again in the 59th minute when Ramires’s dribble opened up the Chile defence and Robinho curled home in masterful style from the cusp of the penalty area.

“We have to improve in all sectors of our play, but it was a nice game against Chile,” said Dunga, who captained his country to World Cup glory in 1994.

“We know The Netherlands are a very difficult team to beat and they are very able technically, they play their football like South Americans.”

Netherlands cruising along
Two-time finalists Holland have reached the last eight despite failing to hit top gear in any of their four matches to date.

Robben set them on their way in the 18th minute against Slovakia in Durban, cutting inside and unleashing a low shot that flew past goalkeeper Jan Mucha, and the Dutch always looked superior to the team that sent champions Italy packing.

But the match-clinching second goal did not arrive until six minutes from full-time when Dirk Kuyt pulled the ball back for Wesley Sneijder to score his second goal of the tournament.

Robert Vittek converted a penalty with the last kick of the game to become joint leading scorer beside Argentine Gonzalo Higuain on four goals.

“I’m not yet at my top level, but I was pretty confident,” said Robben.

“It was a very difficult match. We didn’t play our best game today, but it’s about winning and going through. We’ll save our best game for when we need it.”

Fall-out off the pitch
Off the pitch, the fall-out from two high-profile exits rumbled on, with England coach Fabio Capello admitting to uncertainty about his future and Jean-Pierre Escalettes resigning as president of the French Football Federation.

“I have a contract and I refused a lot of opportunities to be the manager of important clubs because I want to stay here,” said Capello, who admitted that the Football Association would be taking two weeks to review his position.

England crashed out after a 4-1 mauling at the hands of old enemies Germany in the last 16 on Sunday and flew back to London on Monday evening.

Escalettes stepped down after France were dumped out in the group phase amid a player revolt over the FFF’s decision to send striker Nicolas Anelka home after he fell out with coach Raymond Domenech.

Meanwhile, Wimbledon tennis champion Roger Federer was dragged into the row over Fifa’s reluctance to introduce goal-line technology and video reviews in the aftermath of Sunday’s controversies.

England’s Frank Lampard had a perfectly good goal ruled out against Germany while Argentina’s Carlos Tevez was in an offside position when he scored in the game with Chile.

“To me it seems like it’s just crying for a change,” said Federer, whose own sport has embraced technology to solve line-calling disputes.

On Tuesday, the last 16 is completed when Paraguay face Japan in Pretoria while European champions Spain take on Portugal in Cape Town. — AFP