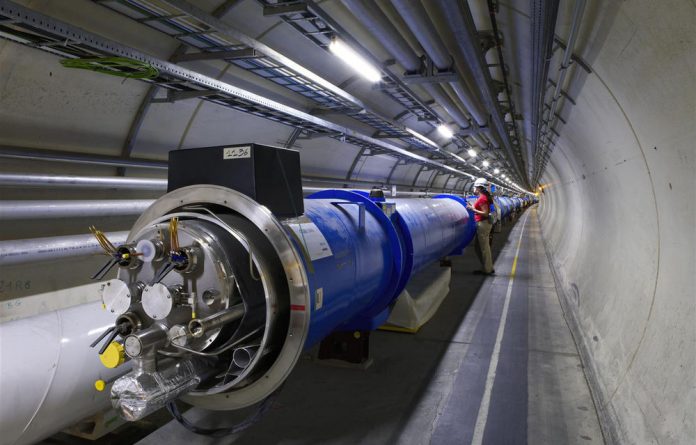 We have all heard of “dark matter”. But what about dark galaxies, dark planets — even dark creatures? Ian Sample reports on the new holy grail of physics

Durham, northern England, December 2009. James Wells, a leading theorist at Cern, the European nuclear research organisation near Geneva, is beguiling an audience of particle physicists with an idea that has the makings of the next great revolution in science.

Wells, a tall, softly spoken 44-year-old from Tampa Bay, Florida, begins with a complaint. Particle physicists are an anthropocentric bunch, too preoccupied with the particles and forces that impinge on humanity. They have spent so much time unravelling mysteries such as the structure of atoms and why the sun shines that they have neglected other avenues. They need to think beyond the world we see and touch.

Our knowledge of the cosmos tells us that the stuff around us, from plants and people to stars and planets, is made from just a handful of elementary particles. There is also a small number of forces that make nature run smoothly, keeping planets in their orbits and ensuring everyday objects don’t suddenly collapse into a pile of atoms.

But how do we know, asks Wells, that much more isn’t going on? Our knowledge of nature is based on observation. What if we can’t see everything?

There could be a “hidden world”, with particles and forces busily at work all around us — but beyond the realm of our senses.

“It would be strange if we were so special that we could feel and observe everything going on out there,” says Wells, one of a growing number of physicists working on the hidden worlds idea. “We are lumps of clay swirling on a little blue marble in an overwhelming vastness of universe. There really should be additional particles and forces,” he says.

Six months after his Durham lecture, Wells is back in his office at Cern. One of the most important meetings in the academic calendar, the International Conference on High Energy Physics in Paris, is only weeks away and this year is the first time that physicists at Cern will unveil results from their shiny new machine, the $6-billion Large Hadron Collider (LHC).

People are furiously writing papers and cross-checking data. Heads are down; blood pressure is up.

Wells is preparing a lecture on using the LHC to find evidence for a hidden world.

The collider, it turns out, is perfectly placed to be the first instrument that could shed light on whether such a realm exists.

The machine is certainly large: it sits in a giant circular tunnel with an 8km diameter that crosses the French-Swiss border 100m beneath the Cern campus. Inside it protons are whipped up to within a whisker of the speed of light and slammed together in head-on collisions. These orchestrated acts of violence recreate conditions in the first moments of the Big Bang.

Physicists have a lengthy shopping list of new phenomena they want the LHC to find. But most prominent is the Higgs boson, an elusive particle dreamt up in the 1960s that is believed to give mass to other particles.

In 1993, the American Nobel prize-winning physicist Leon Lederman nicknamed it “the God particle”, because he considered it critical to our understanding of matter.

Appealing
The Higgs boson has an added appeal — it should be influenced by what happens in a hidden world. As such, it could act as a kind of bridge or window. “The LHC will likely be the first collider to see the Higgs boson and so illuminate this bridge,” Wells says.

Physicists have good reason to believe that unknown realm exists. Even with today’s most advanced telescopes, astronomers can see only 4% of what makes up our cosmic neighbourhood. The rest is invisible to us, revealing itself only by the effects it has on galaxies we can see. About 70% of the unseen cosmos is labelled “dark energy”, a mysterious force that drives the expansion of the universe, making galaxies race away from us. The remaining quarter is chalked up as “dark matter”, an obscure substance that clings to galaxies and exerts an unmistakable gravitational pull on them.

As the Milky Way spins on its axis, our planet is thought to pass through vast unnoticed stretches of dark matter. And it may only be part of the hidden world. “The likely existence of dark matter suggests there is more stuff out there that we do not know than we do know,” says Wells.

The possibilities of what might lurk beyond our senses are endless. Says Neal Weiner, a physicist at New York University: “It leads to all sorts of conversations about the possibilities of dark people and dark planets. That’s extremely unlikely, but it’s something to think about. Once you open the box, it’s not obvious where it will end.”

What is more likely, say physicists, is that the hidden world is filled with a wispy fog of dark matter and weak dark forces incapable of forming dark planets and more exotic objects such as dark life.

Another scientific revolution?
When normal planets form, cosmic matter has to cool down and coalesce into enormous lumps of rock, but it can only do this by losing heat. As far as we know, dark matter doesn’t cool down: if it did, we would see the heat it gives off. It would glow.

Other particles might flit in and out of existence in the hidden world, just as they do in ours. Of all the particles physicists have found in nature — often in cosmic rays and particle colliders — only a tiny fraction are stable enough to form long-lasting objects. The rest decay immediately, into lighter, more durable particles.

John March-Russell, a theoretical physicist at Oxford University, says proof of a hidden world could become the central plank of a major scientific revolution.

When Copernicus put the sun at the centre of the solar system, and when Charles Darwin described evolution, they both knocked humans down a peg. The discovery of a hidden world would force us to reassess our place once more. The known cosmos might turn out to be a microcosm of a richer and more complicated universe.

Frank Wilczek is a theoretical physicist at Massachusetts Institute of Technology and considered one of the most brilliant minds in physics. At the age of 21, he developed a groundbreaking theory about the so-called “strong force” that holds the innards of atoms together, for which he was awarded the Nobel physics prize in 2004.

Two years later, Wilczek and his student at MIT, Brian Patt, coined the phrase “Higgs portal” in a theoretical paper that fleshed out how the Higgs boson could be used to study hidden worlds.

“The Higgs particle is special because it is more open to influence from the hidden world,” says Wilczek. “It might be that the Higgs decays into particles that are invisible, in which case it will look as though it has just disappeared.”

This would not leave physicists as stuck as it might seem. The LHC would register that some energy — that wrapped up in the Higgs particle — had gone missing. The vanishing act could be intriguing evidence, at least, that a hidden world exists.

Another possibility is that the Higgs boson collapses into particles from the hidden world, which themselves decay back into real-world particles we are more familiar with. This would really give scientists at the LHC something to think about. Their detectors would flash with bursts of particles that seem to come out of nowhere.

The crucial point is that by studying how the Higgs boson behaves in the LHC, physicists should be able to build up a picture of the particles and perhaps even forces at work in the hidden world.

One of the most compelling aspects of the hidden-world idea is that it doesn’t require physicists to tear up all the work they have already done in describing the universe. “Physics has advanced so far that it’s not easy to take things on in a way that is consistent with what we already know,” says Wilczek. “The hidden-world idea at least passes that test. It’s easy to add all of this stuff to our existing theoretical framework.”

So when is the LHC going to find this thing? Many physicists believe that it might take three or four years. To trace it, physicists need a collider with enough energy to make the particle, but how much is enough is not clear. Then they need to find the telltale signature of the Higgs particle among the subatomic detritus spewed out by collisions in the machine — a formidable task.

The last major collider at Cern, which shut down in 2000, came up empty-handed despite a lengthy search. Another atom-smasher, the Tevatron at Fermilab near Chicago, has been hunting the Higgs particle for a while, but is due to close within a year or so.

Finding the Higgs boson will end one of the greatest hunts in modern physics, but as that chapter closes, a new one will open. Wells says that the particle could help scientists get over their anthropocentric ways and open up vast new territories. “And that would only be the beginning,” he says. —

Apes may have midlife crises too