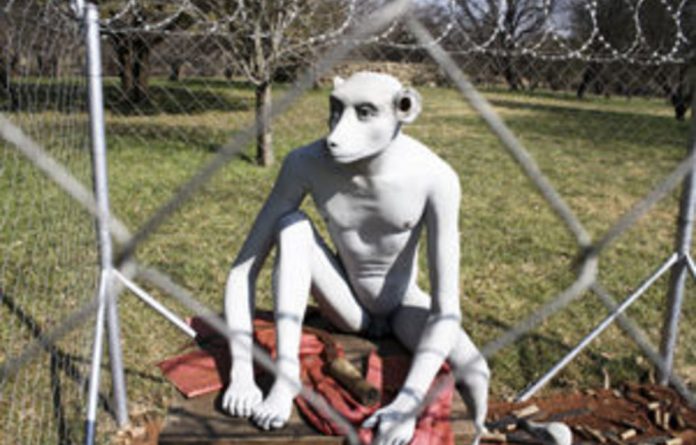 Sometimes I need to leave Johannesburg to spend time away from the city’s neon flowers and cement trees.

People are often surprised at how you don’t really have to drive very far to get away from the sprawl. One double espresso and 40 minutes later and you’re in the Cradle of Humankind. Some of my favourite rocks come from here. Mrs Ples, Little Foot and the most recent discovery, 1,95-million-year-old Karabo (which is on display at the Maropeng Centre until mid-July). Four weeks ago the Nirox Foundation added about 50 South African sculptures to the Cradle’s mix, at the Nirox Sculpture Park, as part of an exhibition called TWENTY: South African Sculpture of the Last Two Decades.

There’s something novel about viewing art outside the confines of a gallery. No walls, just big sky and winter sun. Once this area would have been a grassland — Bankenveld. Now it’s a mix of ornamental ponds, lawn and big trees, not all of which are from here but all of which kind of look as if they belong. At least, they belong as much as Barend de Wet’s silver-painted Just William, with his green-apple ball of wool perched on his head. Or the primordial bronzes cast by Herman van Nazareth and treated with a corrosive material to make them appear to be ancient stone.

Everything in the sculpture park has a form; very little has any apparent function other than to entertain and delight. You can choose how you want it to make you feel.

When I arrived I navigated past the standing wood of Noria Mabasa and crouching stone of Angus Taylor and lay down on the gravel in the sunshine so I could connect with the Earth. It sounds a bit, well, foolish when I put it down like that, but it was that kind of a morning. And, truly, it felt awesome. I crawled like a lizard from one spot of sun to the next, lying on the grass next to monuments of wood and metal and stone.

I walked on slippery rocks across a small stream, then listened to the water falling into the river that runs through the property. I wrote random notes in my journal and built tiny sculptures out of twigs and leaves so that I, too, could be a part of the landscape.

Later on I saw a little boy walk up to De Wet’s giant ball of green steel wool. The child looked at the sculpture for a moment — ignoring the massive knitting needles towering above — then kicked it, as though it were a massive soccer ball. And, for that moment, it was.

The Nirox Sculpture Park is on the Kromdraai Road at the Cradle of Humankind. It is open from Wednesday to Sunday, 10am to 5pm, and entrance is free. For more information go to www.niroxarts.com. TWENTY: South African Sculpture of the Last Two Decades runs at the Nirox Sculpture Park until mid-August. During July and August musician and composer Zim Ngqawana will be performing in a series of concerts and there will be an entry fee of R50