‘Jews don’t own the Holocaust’ 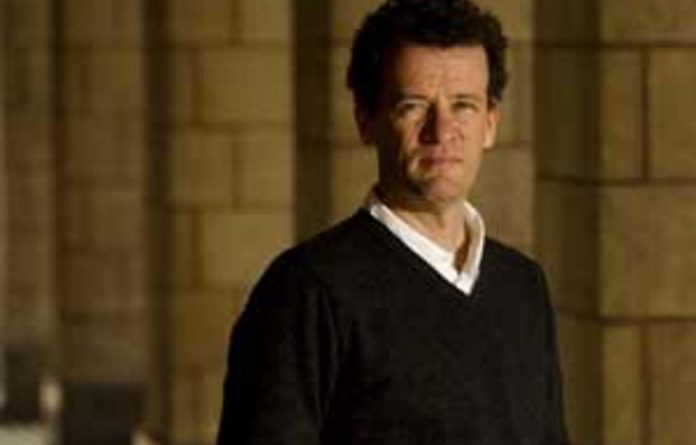 Talking about the Holocaust at nine in the morning in the elegant lounge of a trendy boutique hotel in central London is not ideal. A woman packs up and moves to the other side of the room at Yann Martel’s first mention of genocide. I am conscious of the fact we may be speaking too loudly.

Martel, the Canadian author who won the Booker prize for the outrageously successful Life of Pi in 2002, takes all this more or less in his stride, though he is a little put out by my incompetence and fractiousness — I rather rudely insist that the young woman who is steering him round the United Kingdom and Ireland on the publicity tour for his new novel, Beatrice and Virgil, absent herself from the room while we talk. I’d only finished his book the night before — reaching its dramatic denouement in the bath, if you must know — and feel at something of a disadvantage in talking about it, because he spent eight years labouring over it.

The inescapable fact about the book, Martel’s long-awaited follow-up to Life of Pi, is that it has not been very well received. In the United States the reviews were what one politely calls “mixed”; in the United Kingdom they have been uniformly hostile. The general view is that pretty well all fictional treatments of the Holocaust are doomed, and that this one — about a blocked writer who meets a taxidermist writing a play about “the horrors” and who is probably a former Nazi seeking some sort of catharsis — is more doomed than most.

I have taken along a review by David Sexton, literary editor of the London Evening Standard and a critic with impeccable taste, who had accused Martel of being “not very bright” because of a quote in which he said the monkey and donkey that feature in the taxidermist’s clunky play were appropriate representatives of Jews because they embody mental nimbleness and stubbornness respectively.

Martel is keen to see the review as he has heard about it but not yet read it. I hand it over and lean back. All in all, I am sensing disaster here.

Sensing disaster
Apart from an “Oooh” (or maybe “Pwooh”) at being accused of stupidity by Sexton, he takes it philosophically. “I think there are four kinds of reviews. There are bad bad reviews, good bad reviews, bad good reviews and good good reviews. Good bad reviews that point out genuine flaws are useful. This is just idiotic and very personal. I’m using allegory. If he says that of me, I wonder what he feels about Art Spiegelman in Maus. In Maus the Jews are characterised as mice. But were the Jews mouse-like in the Warsaw ghetto uprising? I wonder how he feels about that characterisation.”

I try to move away from the specifics of this review to the general problem Martel faced with this book — that many critics recoil from the idea of a Holocaust novel written by an author who is neither Jewish nor basing his work, as with Schindler’s Ark, on some sanctified piece of history. He rejects the idea that the Holocaust is “indescribable, that it should be sacred”.

“It’s the specialism of the artist to go where other people don’t go,” he says. “I don’t think the Holocaust gains by having artists staying on the edges. It’s always represented in the same way, in a non-fictional way, so the archetypal figures are people like Primo Levi and Elie Wiesel, or the historians. They’ve all done essential work, but I can’t think of any other historical event that is only represented by historians and survivors. Most other historical events will be taken on by artists.”

He contrasts the multitude of treatments of the two world wars of the 20th century with the much more restricted framework within which the Holocaust is seen, and questions whether the latter serves the variety of the experiences and responses of those who suffered and died. “You can’t quantify human pain the way you can measure out sugar,” he says. “Death comes one individual at a time.”

I suggest that what the critics are trying to tell him is it’s none of his business — he’s not Jewish, is a different generation and is almost inevitably going to come up with a treatment that offends aesthetically.

Beatrice and Virgil is better than many of the critics have suggested, and certainly gripped me as I read the final third in the bath, though there is a temptation to skip the extracts from the taxidermist’s tiresome, quasi-Beckettian monkey-and-donkey fable.

The beginning of the book is especially compelling — a lunch at which the author, Henry, is slated for having written a book about the Holocaust deemed unpublishable by a posse of editors from the UK and North America who have assembled to tell him to do it differently, if he does it at all. Clearly, Henry is Martel and this lunch did occur, when his publishers ganged up to tell him that five years’ work on his book had been misdirected.

The problem, as becomes clear in conversation as well as in the novel, was that he had conceived of a “flip book” that could be read from both front and back. From the front, you got the novel; from the back you got an essay on how difficult it is to represent the Holocaust. The two would presumably have met in the middle, to their mutual enlightenment. But his lunch companions were unconvinced. He sums up their feelings in Beatrice and Virgil: “The novel was tedious, the plot feeble, the characters unconvincing, their fate uninteresting, the point lost; the essay was flimsy, lacking in substance, poorly argued, poorly written. The idea of the flip book was an annoying distraction, besides being commercial suicide. The whole was a complete, unpublishable failure.”

I tell him I rather liked the idea of the flip book. “So did I,” he says. Did he fight for it? “I fought a lot for it, but I accepted their [his editors’ and publishers’] argument that non-fiction is a very specialised product, whereas a novel is a very broad product that has great general appeal. A great novel from Colombia, One Hundred Years of Solitude, will be read around the world, whereas who’s going to read a history of Colombia? A fraction of those people who might read One Hundred Years of Solitude. They said, ‘Your essay will drag down the novel’.”

He dropped the essay and set about reworking the fictional element, now framed as two men (both called Henry) both trying to find a way to describe the Holocaust. The writer Henry’s chance encounter with the taxidermist Henry eventually makes it possible for him to find a way through the conceptual problems posed by his publishers.

Martel strikes me as quite a tough cookie, clever and hard-edged. If he had absolutely believed in the flip-book concept, I suspect he would have got his way. After all, here was an author whose previous book, Life of Pi, has sold more than 7-million copies around the world and is reckoned to be the most successful Booker winner of all time. It’s a fair bet he could have found other publishers, but he says he respects the ones he has and in the end accepted their arguments.

Life changing
Life of Pi catapulted him into the literary stratosphere, made him a millionaire (a film of the book due next year, to be directed by Ang Lee, will presumably add to the pot) and sent him on the road for two years doing interviews. The book even found him a wife, the writer Alice Kuipers, whom he met at the Cheltenham festival where he was talking about Life of Pi in 2003. Martel is 46, Kuipers 31, and son Theo was born last year.

So Life of Pi changed everything? “It made my life more complicated, busier. But not on the inside. The process of writing remains exactly the same — research, writing, rewriting.”

He seems unfazed by the sudden wealth. “I don’t smoke, I don’t drink, I didn’t own a car until I was 39. I’m not a consumer. I hate buying clothes. I don’t have a mobile. I just don’t need things. I don’t like things.”

Martel and his family live on the Canadian prairies, in the town of Saskatoon, where he is loosely attached to the University of Saskatchewan. “It’s a great little community in Saskatoon,” he says. “I got tired of living in big cities. I lived for 10 years in Paris, I lived for 10 years in Montreal, I lived a summer in Toronto, I spent a fair bit of time in London. In all big cities the style of life is the same. Same endless array of restaurants; same big museums with the usual suspects; same anonymity, which can be thrilling when you’re young but which I found got tiresome. What I like about a small city is it can’t compete with big cities, so it can only be itself. It has a certain authenticity.”

Martel’s father was a Canadian diplomat (and award-winning poet) and his mother a translator; because of his father’s job, his upbringing was peripatetic — he was born in Spain and grew up in Costa Rica, France and Mexico as well as Canada. His family spoke French but he attended English-speaking schools and has always written in English; as well as being bilingual in English and French, he is fluent in Spanish. The multilingualism and his parents’ literary leanings made writing an almost inevitable calling.

Martel is already deep into his next novel, which is set in Portugal and features three chimpanzees. He is reading dozens of books about chimps and currently trying to find out what kind of car would have been driven in Portugal in the 1930s. “Those kinds of questions, that kind of approach to the world, is what I find satisfying,” he says. “After that, fame, money, ‘Why don’t you live in Bel Air?’ It’s like, ‘Why would I want to do that?’ I’m quite happy living the natural life of the writer. It is a thrilling place to be.” — Guardian News & Media 2010

A nationalistic, gangster political faction is ready to feed off the crisis created by social inequality
Read more
Opinion