Germany and Spain in fight for final 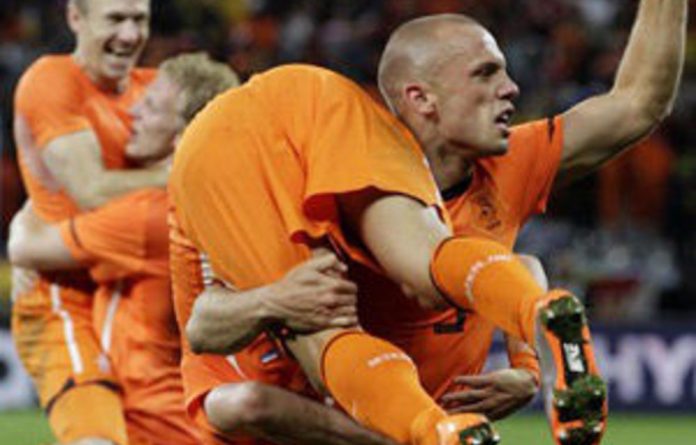 Germany and Spain do battle on Wednesday for the right to meet The Netherlands in the World Cup final, in a semi widely expected to be one of the most exciting clashes of the tournament. A 3-2 Dutch victory on Tuesday against a Uruguayan side who fought until the last minute in a thrilling encounter, guaranteed Europe would win its first trophy outside the continent in the final at Johannesburg’s Soccer City on Sunday. The semifinal in Durban on Wednesday promises to be another thriller with both teams committed to attack and fast passing.

The speed and quality of the German side has been one of the surprises of the tournament while European champions Spain are one of the world’s most stylish teams, able to torment opponents with precision passes and possession.

Germany will be looking for revenge for their defeat by Spain in the 2008 Euro final.

But German coach Joachim Loew says they have got better and the speed of their game has improved since then, while Spain are the same, admittedly efficient, side as two years ago.

The Netherlands, in their first final since 1978, had to endure some nail-biting moments in the other semifinal on Tuesday when Uruguay pulled a goal back in added time and looked in danger of scoring another in the dying seconds.

Before The Netherlands, considered the best team never to have won the World Cup, were grabbing their place in the final, Africa’s heroes Ghana were feted on Tuesday when they returned home after narrowly failing to reach the semifinal.

The Ghana team, the only one of six African sides to do well, was granted a $20 000 bonus for each player and hailed by both President John Atta Mills and former United Nations chief Kofi Annan, who said they were moral victors.

They were controversially beaten by Uruguay in a penalty shoot-out after becoming only the third African team to reach the quarterfinals in a World Cup.

One defeat each
Germany and Spain have suffered only one defeat in the tournament, both to small teams — Switzerland beat Spain and Serbia defeated Germany in the group stages.

But Germany have been the most impressive scoring four goals on three separate occasions: sweeping aside Australia, England and most sensationally favourites Argentina who were crushed by the speed and quality of the youngest German squad for 76 years.

Germany and Spain share a healthy respect for each other.

German coach Loew said Spain would be much harder to beat than Argentina and Vicente del Bosque paid tribute to his opponents’ blend of youth and experience.

Loew has built a formation that tries to incorporate English pace, Italian defence and the fluidity of their Spanish opponents.

Spain started more slowly in this tournament and have scored fewer goals, but striker David Villa is deadly in pouncing on the slightest chance and Xavi and Andres Iniesta orchestrate a constantly mobile midfield.

Both teams represent one of the features of Africa’s first World Cup — that success is built on teamwork rather than sides that revolve around the many big names who have flopped here including Wayne Rooney and Cristiano Ronaldo.

There was one hiccup in German harmony on Tuesday when World Cup captain Philipp Lahm said in a newspaper interview he saw no reason to give up the armband when Michael Ballack returned to fitness after the injury that kept him out of the side.

But team officials shrugged this off, saying it represented no dissent or conflict.

Germany will be without suspended midfielder Thomas Mueller. Loew has several options to replace him.

Spanish midfielder Cesc Fabregas is likely to be available after an injury to his leg proved less serious than feared.

More of a worry for Del Bosque may be the continuing failing form of striker Fernando Torres who has not hit his stride properly since returning from surgery.

But Villa’s deadly form has made up for that in previous matches. He has rarely missed when given even half a chance near goal.

Superstitious German fans may be worried that an allegedly psychic octopus which has correctly predicted the result of all their matches so far here, foresees a loss against Spain.

Paul the octopus, which lives in an aquarium in western Germany, makes his prophecy by picking food from containers marked with the flags of the two teams.

Perhaps to counter the octopus, Germany coach Joachim Loew is refusing to change his trademark blue sweater on the touchline because staff and players think it brings them luck. – Reuters