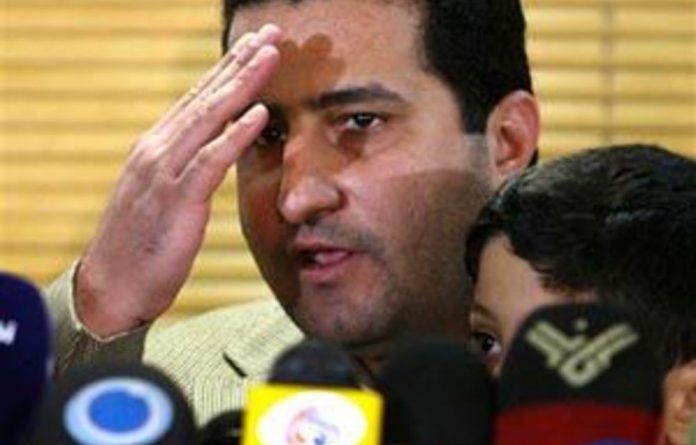 An Iranian nuclear scientist who says he was abducted by CIA agents a year ago returned home from the United States early on Thursday, saying he was pressured to lie about Iran’s nuclear programme.

Washington denied kidnapping Shahram Amiri and insisted he had lived freely in the US. A US official said, however, that the US, eager for details of Tehran’s nuclear activities, had obtained information from him.

Amiri (32) repeated claims he was kidnapped in 2009 when on a pilgrimage in Saudi Arabia and transferred to the US, adding that he was offered $50-million to remain in America and “to spread lies” about Iran’s nuclear work.

The scientist also said Israeli agents were involved in interrogating him.

Tehran and Washington have traded propaganda over the murky saga, which has underlined deep mistrust between the two nations.

“Americans wanted me to say that I defected to America of my own will to use me for revealing some false information about Iran’s nuclear work,” Amiri, holding his seven-year-old son, told reporters at Tehran’s International Imam Khomeini Airport.

“I was under intensive psychological pressure by the CIA … the main aim of this abduction was to stage a new political and psychological game against Iran.”

The US and its European allies fear Iran is trying to build bombs under cover of a nuclear programme. Iran says it needs the technology to generate power.

The mystery surrounding Amiri fuelled speculation that he may have passed information about Iran’s nuclear programme to US intelligence. ABC News reported in March that Amiri had defected and was helping the CIA.

Wearing a beige suit, Amiri made victory signs as he hugged his tearful son and wife, who greeted him with other family members and a senior Foreign Ministry official, Hassan Qashqavi.

Qashqavi praised Amiri for his “resistance against [US] pressure during his 14 months of abduction”.

Iran says the CIA kidnapped Amiri, who worked for Iran’s Atomic Energy Organisation. He surfaced at the Iranian interests section of the Pakistani embassy in Washington on Monday.

‘No intelligence’
“Israeli agents were present at some of my interrogation sessions and I was threatened to be handed over to Israel if I refused to cooperate with Americans,” said Amiri. Iran refuses to recognise Israel since its 1979 Islamic Revolution.

Intelligence about the Iranian nuclear programme is at a premium for the US, which fears that a nuclear-armed Iran would threaten its close ally, Israel, as well as oil supplies from the Gulf, and friendly nations in Europe.

Amiri said he had no valuable intelligence about the Iranian nuclear programme. “I am an ordinary researcher … I have never made nuclear-related researches,” the scientist said.

A man identifying himself as Amiri has variously said in recent videos that he was kidnapped and tortured; that he was studying in the US; and that he had fled US agents and wanted human rights groups to help him return to Iran.

The State Department said the US did not kidnap Amiri, but it has not addressed whether another country might have abducted him and turned him over.

Asked why Amiri was going back, a US official, who spoke on condition of anonymity, said the Iranian authorities could have put pressure on his family back home.

But Amiri said: “My family had no problems”. — Reuters