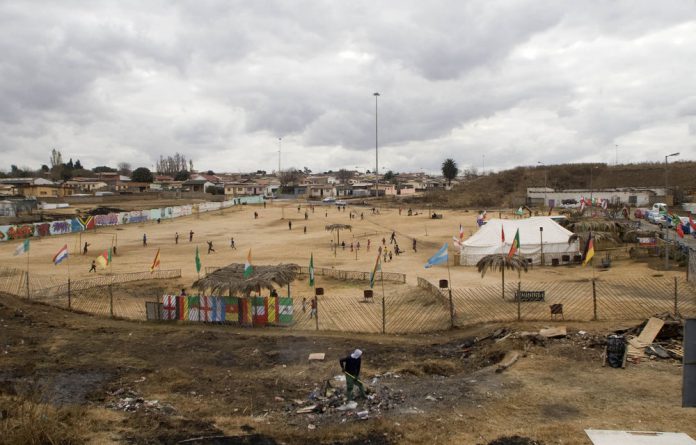 Two white males stand out as they pedal their bikes down a street in Phomolong, Soweto. The neighbourhood, the name of which means “resting place”, has been buzzing more than usual since the World Cup kicked off about a month ago.

Although locals have now grown accustomed to tourists biking in Soweto, the scene surprises me when I pull up into Lebo’s Soweto’s Backpackers on Pooe Street, Soweto’s very own backpacking establishment. Tandem mountain bikes and other ordinary bikes are parked on the property.

As I leave my car two young blondes in tight jeans and colourful tops saunter up the road. I am greeted by a blazing brazier at the entrance to the backpackers’ pause area. Lebo Malepa, the 34-year-old owner, is seated near the entrance. He is sporting a comfortable yet trendy tracksuit and could easily be mistaken for one of his laid-back guests.

He was selling African craftwork in the famous Vilakazi Road, which houses the Nelson Mandela Museum, when, back in 2003, he dreamed up the idea of Soweto’s first affordable backpacking lodge at the family home. He pioneered guided tours by bicycle or on foot to popular destinations such as the Hector Pieterson Museum, Vilakazi Road and the once-notorious hostels near his establishment.

In recognition of his entrepreneurial flair Malepa was awarded the R50 000 Emerging Tourism Entrepreneur prize in 2008. He employs 15 permanent staff.

He encourages his guests to immerse themselves in the local community by doing volunteer work or, during this World Cup season, taking part in a football challenge against local children.

A few steps from where Malepa is seated is a beach-style bar. A sign, labelled “Bar Rules”, reads: “If you are still standing, you probably need another beer.”

Tourists are scattered around a few tables sampling the local cuisine.

One of them is a German who will identify himself only as Yuri. The 23-year-old is studying for a master’s in political science and wants to become an academic. He is spending his second night at Lebo’s and is excited about watching Ghana play against Uruguay later that day.

He notes how affable the locals are, “especially the children”. He is staying in Soweto to experience something different. Affordability, especially during a World Cup, did not feature much in his choice.

“It’s really close to Soccer City. I didn’t read very much good things about Johannesburg so I thought, why not try something new,” Yuri says.

He went on a walking tour of Soweto the day he arrived at Lebo’s and was struck by how friendly the people were.

I also talk to 22-year-old Adam Gregory, an Australian law student from Tasmania, who has just finished eating a quarter, or kota (as locals like to call a portion of a loaf of bread filled with chakalaka or russian sausages), and is washing it down with a pint of Black Label beer.

He is en route to Spain and decided to stop over in South Africa for the World Cup.

“Oh, the sandwich was nice and filling,” he says about the kota.

A first-time visitor to the country, Gregory has just completed a four-hour bicycle tour of Soweto and is heading to the airport to catch his flight to Spain.

“I had a really good time. Everyone is so friendly,” he says before climbing into a minibus.

He vows to return to a more sunny South Africa.