A hand for the land 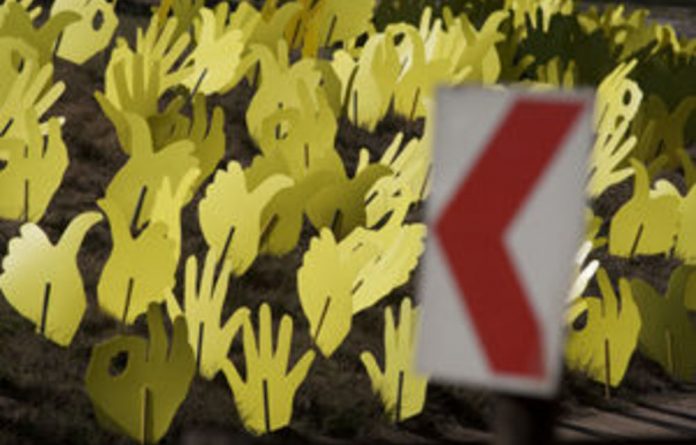 Many Hands, an artwork on the eastern side of Johannesburg, is a step towards correcting the dearth of land art in South Africa. The artwork, funded by the Gauteng provincial government, is twofold in nature.

First, as you drive down Bezuidenhout Street in Bez Valley, you are struck by a great number of tree trunks wrapped in Day-Glo orange nylon. Although the trees may be less animated during the day — indeed, some of the wrapping is a tad clumsy — at night the relationship the trunks have with street lights and the moon is organic and alluring.

The second part of the work is at Gillooly’s interchange, past Eastgate mall, on your way to OR Tambo International Airport. Tourists visiting for the World Cup, as well as locals who use that road, have seen a piece of artwork not in the usual gallery space but in their everyday landscape.

The work consists of fewer than 20 000 yellow hands. I say “fewer than” because I have witnessed some of the hands being removed — let’s just say stolen — from their temporary home by passing drivers.

A flood of yellow hands
As you curve around from the N12 east offramp on to the N12 south, you are pleasantly flooded by a mass of yellow hands in a spiralling style, reminiscent of Robert Smithson’s Spiral Jetty.

The hands, each less than a metre high, were conceptualised by land artist Strijdom van der Merwe under the auspices of Art Project Management!, a project run by cultural activist Lesley Perkes and Monna Mokoena of Gallery Momo. The two works were put up in May and are intended to remain in place for another three months, if funds permit.

One of the things that bothers me about public art is the thorny issue of audience. One feels that, more often than not, public art doesn’t seem to communicate to the people for whom it is intended. For instance, I wonder whether the hawkers who sell their wares next to the buildings on which the image of Sophie, the domestic worker in blue Victorian dress (that went up in the city last week) created by artist Mary Sibande, truly appreciate or acknowledge the pieces, or whether they wonder cynically which product the images are selling.

This could never be the case with Van der Merwe’s yellow hands. Upon passing the hands for the umpteenth time, and still feeling giddied by the experience, I screamed at my five- and 12-year-old cousins to stare at the objects. They looked out and seemed to figure out what they were seeing. They didn’t need to understand why thousands of yellow hands were placed on the side of the highway or that it was art. But they seemed to appreciate the aesthetics, the sheer beauty and the thoughtfulness that went into the project.

This is not the first project of its kind that Van der Merwe has created. He has done other land artworks around the world. Those are just as exhilarating, inviting the public to perceive their everyday surroundings differently.

Although the Nirox Foundation (just outside Johannesburg) has lit up its landscape with 20 sculptures in its Twenty: 20 years of South African Sculpture, it is hidden from many, attracting only committed art lovers who make the effort to visit the space.

Enthusing the audience
Land and public art in South Africa might have taken a promising trajectory for the World Cup, but few of the works — including Sibande’s 18 portraits of Sophie around the city and the red Coca-Cola crate man at Mary Fitzgerald Square — seem to have enthused viewers as much as Van der Merwe’s yellow hands.

Next spring, if more funding comes through, Johannesburg residents and visitors might have the good fortune to witness blooming purple jacarandas juxtaposed with orange-trunked trees.

But what will happen to the hands? Well, according to Perkes, they will either be donated or recycled for another art commission. I wonder whether Perkes realises that by the end of the project, entranced drivers might have already collected a large number of the hands to decorate their backyards.