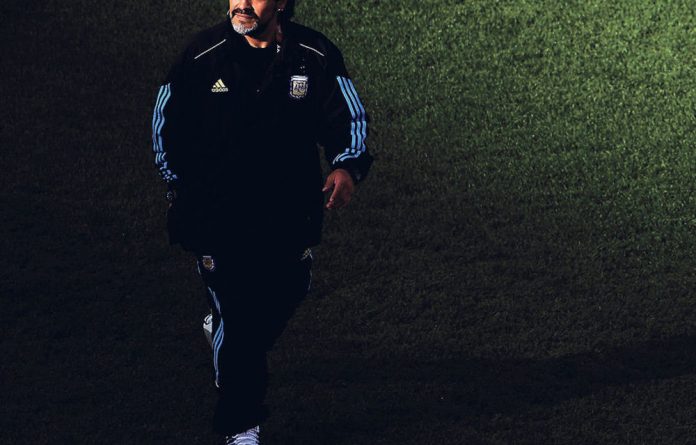 There’s one team manager I know, a great guy, promoted because he was really good at what he does. Problem is that now, as head of a business unit, he has to lead and manage the performance of 12 people. He does this badly.

He doesn’t know how to deal with underperformance except by putting in many hours of extra time — reworking material, correcting errors — to get the quality of the team’s work up to the expected 100% level. He looks older than he should for his age.

I’ve been wondering if he could learn from football coaches. Diego Maradona, for instance, spent the whole World Cup moving around his technical area, gesticulating and agitated. At times he’d step over the line, but quickly remind himself of his role and its limits.

As much as he might have liked to rewind his clock and be one of the world’s greatest players again, in football the coach doesn’t get to play — and you don’t get the opportunity of working overtime to make up for poor performance.

Should that be class 101 for business managers? If you are doing extra time to compensate for poor performance then what’s in question is your own ability to manage and lead a team. You need to up your game or reconsider whether you are in the right game.

There’s no fudging in football. You win or you don’t. And a coach’s performance is judged on the measurable success the team achieves. Coaches get fired a lot – more so than executives who lead underperforming business teams.

Football coaches define strategy. They select the squad and the 11 players who start the match. They make critical substitution decisions at key moments.

Many factors come into play: form, fatigue, a need to change strategy or the danger of a player getting just one too many yellow cards. There’s a high level of strategic engagement and flexibility without the coaches themselves ever being on the field.

There are things that business could learn from football about managing performance and vice versa.

The Corporate Executive Board researched what affects a team’s performance in the business arena. They compared teams that performed competently and benchmarked them as performing 100% and compared them with teams that maximised their potential.

They found that when leaders ensured that certain things were consistently in place the teams operating under these conditions would outperform your run-of-the-mill competent team by as much as 16%. The top factors were:

And they identified a further 9% possible performance increase. Where from? From the quality of leadership. It was found that if the leader provided a vision and inspirational walk the talk teams responded with “discretionary effort”, resulting in up to an additional 9% performance.

World Cup French coach Raymond Domenech seemed to have the most difficulty inspiring the 2006 runners-up. As to who was the best coach, Phathisani Moyo made a key point in last week’s Mail & Guardian. He noted “collective effort had reigned supreme” — all the teams that depended too heavily on big stars had exited.

Another lesson for business: the whole can so clearly be greater than the sum of the parts. A team of ego-driven stars is likely to disappoint.

A last thought as I compare the business of football and the business of business. Now is the time in which players can change clubs, the buying and selling window period is open. I listen to conversations about Arsenal’s best player wanting to move to Barcelona. But why would Cesc Fabregas want to leave Arsenal?

Research work in the United Kingdom identified the following factors as influencing levels of work satisfaction, which ultimately determines whether people stay in their jobs or seek new opportunities:

Football aficionados, tell me if I’m wrong, but I’d venture that the absence of the last factor, “meaningful future”, is why Fabregas wants the move to Barcelona.

Unfortunately he doesn’t see a meaningful future with Arsenal. Yes, they finished third in the UK Premier League, they’re winning, but not quite winning enough.

Some food for thought:

In fact it goes beyond work; it applies to how we are as leaders, nurturing our child­ren, or, with our significant others, navigating our way into a long-term enjoyable future.

Nation needs to be ready to let Mandela go