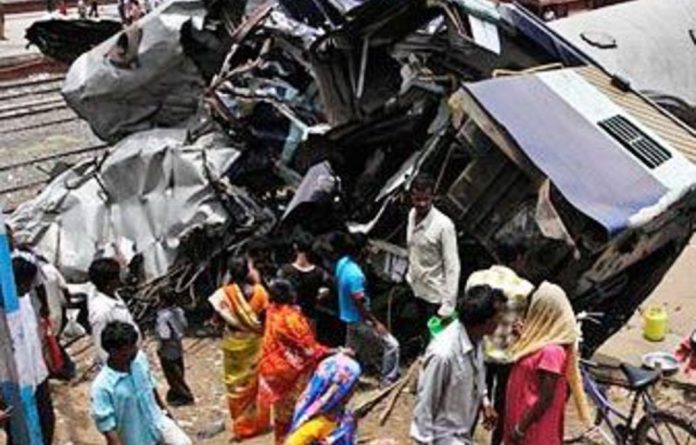 A probe into a rail crash in eastern India that claimed more than 60 lives on Tuesday focused on why a packed express train hurtled at high speed into a station where it was scheduled to halt.

The express roared into Sainthia station in West Bengal state at 90km/h early on Monday and slammed with enormous force into the rear of a stationary train waiting to leave the platform.

More than 160 people were injured and two of them died overnight, raising the overall death toll to 63.

Speculation and looming state elections in West Bengal produced a host of theories in the immediate wake of the crash, as the potential for blame was shifted between politicians and railway officials.

Indian Railway Board chairperson Vivek Sahay suggested that human error was the most likely cause, saying the express driver had ignored a stop signal and then failed to reduce speed as he approached the station.

“Why was the train travelling so fast? The driver didn’t even touch the brakes or the emergency brakes,” Sahay told reporters.

With the express hurtling towards them, officials at Sainthia station issued frantic warnings over the public address system, telling those on the platform to run for safety.

‘Not up to the job’
Retired train drivers interviewed by several Indian newspapers questioned Sahay’s version of events, saying the fact that neither the driver nor his assistant attempted to apply the brakes suggested a signal failure or other technical malfunction.

Railways Minister Mamata Banerjee had initially raised the possibility of sabotage, a move her opponents said was aimed at deflecting criticism for a recent spate of train accidents on her watch.

Banerjee has come under pressure for neglecting her ministerial duties in order to concentrate on the May 2011 polls in her home state of West Bengal, where she is aiming to end more than three decades of Marxist rule.

“Shunt Her Out” was the front page verdict of the Mail Today newspaper, while an editorial in the Hindu said Banerjee was “clearly not up to the job of ensuring safety on the tracks”.

“The tragic accident took place because of negligence on the part of the railway administration,” Mukherjee said. — Sapa-AFP