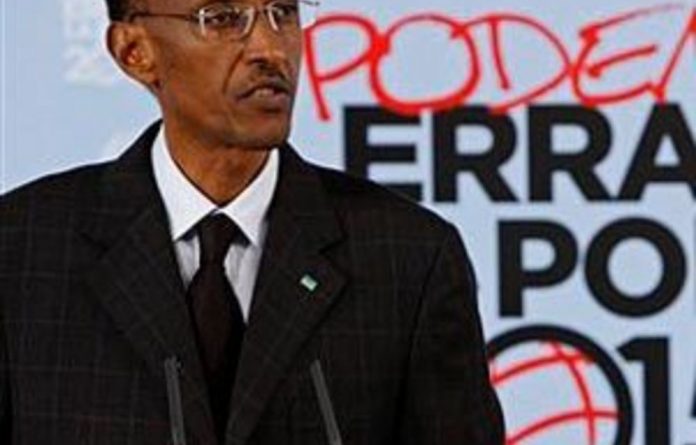 Rwanda’s foreign minister on Monday vehemently denied the government was involved in three recent high-profile attacks on opponents, saying investigators and journalists should be searching for people trying to create chaos ahead of upcoming elections.

Critics claim the Rwandan government is cracking down on dissent ahead of the August 9 presidential election, citing the killings of opposition journalist Jean-Leonard Rugambage and opposition leader Andre Kagwa Rwisereka, the shooting of dissident former Rwandan general Kayumba Nyamwasa, as well as the arrest of American defence lawyer Peter Erlinder.

“We certainly might not be a model government for a lot of people, but we’re not a stupid government, and we will not try to kill three people in a row right before election, an election in which we believe strongly that President Paul Kagame would win,” Louise Mushikiwabo said in an interview with the Associated Press.

Since at least 500 000 ethnic Tutsis and moderate Hutus were killed in the 1994 Rwandan genocide, the minister said the country has developed a reputation for being secure, which is important for its survival and rebuilding, “so we’re not going to, for no good reason, start creating instability in the region”.

“We have no motive whatsoever,” Mushikiwabo said. “The question we should be posing is, who really benefits from this state of affairs? Who benefits from instability and fear in Rwanda? Certainly not this government and certainly not Paul Kagame.”

“For sure we know that somebody wants to create chaos and trouble for Rwanda before our elections, so we are on high security alert,” she said.

Mushikiwabo said she still expects the August 9 elections “to take place peacefully” and she said the four presidential candidates, starting on Tuesday, will be out campaigning and talking to voters.

‘Rwanda does not want a dead general’
Mushikiwabo said Nyamwasa, the former general who survived after being shot in the stomach near his home in South Africa by assailants, was wanted in Rwanda on charges of creating instability in the country earlier in the year.

“That’s what made him leave the country,” she said. “Rwanda does not want a dead general. Rwanda wants a general who can face trial and defend himself.”

She said there have been arrests in Nyamwasa’s shooting but the government hasn’t heard “anything conclusive” from the South African government.

As for Rugambage, Mushikiwabo said he had been a young soldier in the army that was committing genocide in 1994, served time in prison and became a journalist when he was released. She echoed Rwandan police who said two suspects were arrested and one was related to a person said to have been killed by Rugambage during the genocide.

Mushikiwabo said someone has been taken into custody on suspicion of having murdered Rwisereka, the first vice-president of the unregistered Democratic Green Party of Rwanda, whose body was found last Wednesday near the border with Burundi, his head almost detached.

Disputing the generally accepted version of Rwandan history
Erlinder, the American lawyer, was arrested in June on a charge of minimising Rwanda’s genocide but later released on medical grounds.

He disputes the generally accepted version of Rwandan history, which holds that the vast majority of victims were ethnic Tutsi massacred by extremist Hutus. He contends large numbers of Hutus were killed too, maybe more Hutus than Tutsis — a claim not supported by research done by international human rights organisations.

Erlinder returned to his home in Minnesota but Mushikiwabo said: “Rwanda expects him to face charges in Rwanda.”

“The substantive case has to be tried so we do expect him to be available when the judicial authorities want him to be in Rwanda,” she said.

Kagame led the Tutsi-dominated force into Rwanda in 1994 that ended the genocide and he has been in power ever since.

Hutu critics say Rwandan law stifles conversation and is bottling up grievances that need to be aired publicly, and one recent report, talking about Hutu refugees in Uganda, said that the ingredients are in place for a return to Hutu-Tutsi conflict.

Mushikiwabo said this will never happen.

“Genocide is a state crime. It’s a crime committed by a state, by leaders. There is no way that Rwandans today — I’m talking about 10-million Rwandans living in Rwanda today — would allow any leader at all to brainwash them and take them back to 1994,” she said. — Sapa-AP