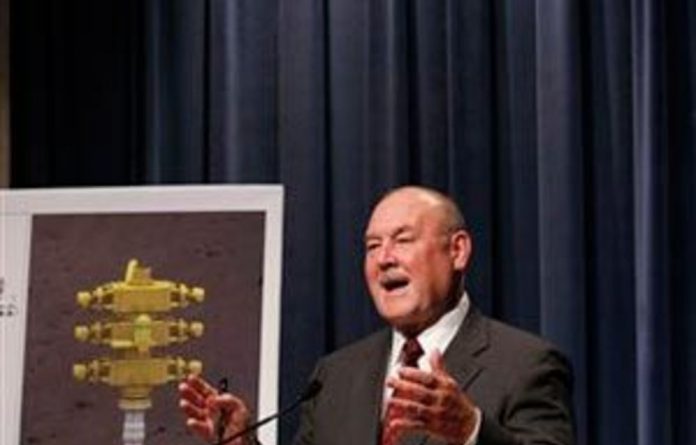 BP crews on Wednesday made hasty preparations to protect the damaged Gulf of Mexico oil well from a looming storm, forcing them to halt work on plugging the damaged well-bore.

“We are having to watch the weather very, very carefully now and adjust our plans accordingly,” BP senior vice-president Kent Wells told reporters.

Anxiously eyeing the bad weather brewing in the Caribbean to see if it could become a tropical storm and veer towards the Gulf, US and BP officials pored over data mulling whether to order an evacuation.

The National Hurricane Centre downgraded an earlier forecast saying there was now a 40% chance instead of a 50% chance of the system “becoming a tropical cyclone in the next 48 hours”.

But in case it has to evacuate the area around the damaged well, which lies 80km off the Louisiana coast, BP early on Wednesday placed a special plug inside the well’s casing.

The well has been capped since last Thursday, and the plug, dubbed “a storm packer”, was “another barrier, so that nothing can flow up or down past that plug … so that if we have to leave we have multiple barriers”, Wells said.

Depending on how the system develops, officials may have to issue evacuation orders for hundreds of support ships and engineers trying to finish drilling a relief well deep under the seabed.

“If we have to evacuate the area … we could be looking at 10 to 14 day gaps in our lines of operation,” warned retired Coast Guard Admiral Thad Allen, who is in charge of the US government response to the Gulf disaster.

President Barack Obama, who met with top officials, including Allen, on the oil spill response, “pushed his team to be prepared for any scenarios related to the potential development of a tropical storm in the Gulf”, the White House said.

Frustrating setback
Any storm would be a frustrating setback as the British energy giant may be within days of permanently plugging the well, which began leaking after an April 20 explosion.

Wells confirmed work had stopped on Wednesday on the relief well still seen as the ultimate solution to killing the damaged well, until the weather forecast became clearer.

The final pieces of casing need to be placed on the relief well to protect it before a so-called “static kill” can begin.

Allen said earlier that depending on the weather the “static kill” could start as early as the weekend.

But BP has not yet been given permission to start the operation, and Wells was more cautious on the timing, saying it would take three to four days to first finish the relief well casing.

The static kill would see BP try to drown the oil flow by pumping in mud and cement via the giant 10m cap, which has prevented any oil from streaming into the Gulf for almost a week.

‘There is a definite sense of doom’
Local residents warned that efforts to choke off the well may be too late, with hundreds of miles of coastline in five Gulf states already fouled.

“There is a definite sense of doom here. Everyone seems just defeated. Every day they are being told about oiled marshes, where they grew up,” said Jessica Lass, spokesperson for the Natural Resources Defence Council, which has set up a centre in the small Louisiana town of Buras.

“This is their livelihood, because it’s not like the shrimp are going to come back this year. Knowing that your source of income could potentially be permanently gone, what are you supposed to do?”

A vast swath of the Gulf has been closed to commercial and sport fishing, a key economic lifeline for this impoverished area.

BP has already spent close to $4-billion on clean-up costs and compensation claims and has promised to set up a $20-billion fund to pay victims of the disaster along the US Gulf Coast.

In a sign of some potentially good news, Allen said hundreds of boats deployed to skim oil from the Gulf surface were having trouble finding any.

It is not known exactly how much oil has leaked into the sea, but if an upper estimate of more than four million barrels is confirmed, the disaster would be the biggest accidental oil spill ever. — AFP