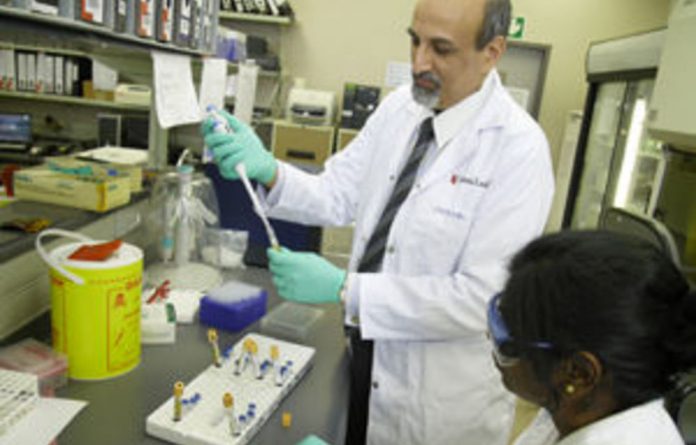 The South African government would consider fast-tracking a groundbreaking HIV-blocking vaginal gel through regulatory processes to get it into clinics faster, Health Minister Aaron Motsoaledi told the International Aids Council in Vienna this week.

“Anything that has to do with combating HIV/Aids must be given preference in terms of the regulatory functions,” Motsoaledi told delegates at the conference, where the results of the South African trial of the gel were released this week.

Tenofovir gel, developed by researchers at the Centre for the Aids Programme of Research in South Africa (Caprisa) in Durban, was found to be 39% effective in reducing the risk of HIV infection in women.

The gel has also been shown to have a 51% protective effect against genital herpes. Because genital herpes sufferers are more likely to acquire or transmit HIV, preventing such infections could also help prevent HIV infection in the long term.

The trial proved for the first time that a topically applied substance or microbicide can prevent HIV transmission.

Researchers believe that the gel, hailed as revolutionary, could prevent up to 1,3-million new infections and avert 800 000 deaths in South Africa in the next 20 years. Biological factors make women more likely to acquire HIV during unprotected sex and they carry a disproportionate burden of the disease. About 60% of new infections are among women and girls.

Plans in motion
According to Henry Gabelnick, executive director of Conrad, the US-based agency that supplied the gel, moves are already under way to smooth its path from concept to clinic. Gabelnick said that the science and technology department’s technology innovation agency will form a public-private partnership with a South African-based pharmaceutical company to set up manufacturing capabilities and win regulatory approval from the Medicines Control Council (MCC).

Interested parties had ‘been working on this for a year now”, he said. However, the gel would first have to prove itself in a larger trial.

Salim Abdool Karim, one of the principal investigators in the trial, said a multi-stakeholder meeting has already been planned to chart the way forward for that trial. The meeting, to take place later this year, will be jointly hosted by the South African government and the World Health Organisation and will bring together researchers, policymakers and ethicists. “The highest priority is for us to develop a consensus about the next step,” said Abdool Karim.

He said the group would try to establish the level of evidence required by regulatory bodies such as the MCC to license the gel as a medicine. Researchers will design the follow-up confirmatory study so that licensing can take place more speedily.

“Those confirming studies need to be in the field six months from now and they should be designed to provide the information that the regulator wants in order to license this product,” he said.

Because the study needs independent confirmation, a different research group will conduct those trials.

The science and technology department, in consultation with leaders in the sector, last year selected Helen Rees, executive director of the reproductive health and HIV unit at Wits University, and Glenda Gray, co-director of the perinatal HIV research unit, to lead the new initiative. They have brought on board researchers from the top 10 HIV research units in the country.

Further research
As well as scaling up the number of women involved in the study, further research would address issues such as whether a long-acting formulation, a vaginal ring mechanism or an alternative dosage will produce better results.

A long-acting gel, for instance, would allow women to dose themselves only once a day and could result in better adherence. The gel used in the trial had to be applied at least 12 hours before sex and again no more than 12 hours afterwards.

If the gel is approved for public use, it will need better marketing to make it more attractive to consumers. It currently comprises a clear white plastic applicator similar to a tampon applicator, while the gel itself is clear, odourless and tasteless. The packaging is clear and white.

Abdool Karim said it would be up to marketers to figure out how to “make the gel sexy and desirable”.

He plans to return to the laboratory to understand why some women still become infected while on tenofovir. This work will be carried out at a new high-tech laboratory under construction at the University of KwaZulu-Natal’s Doris Duke Medical Research Institute.

He is contemplating a more ambitious study, which will attempt to understand the impact of a product such as tenofovir gel on an entire community, including women’s partners and babies. Such a trial could involve more than 4 000 people in 12 communities and will be carried out over five years.

Asked and answered: Six things you need to know about the new Covid-19 variant in South Africa

Can you get reinfected with Covid-19? SA has ‘4 000 potential reinfections’

Q&A Sessions: ‘I should have fought harder for SA vaccine’ — Salim Abdool Karim