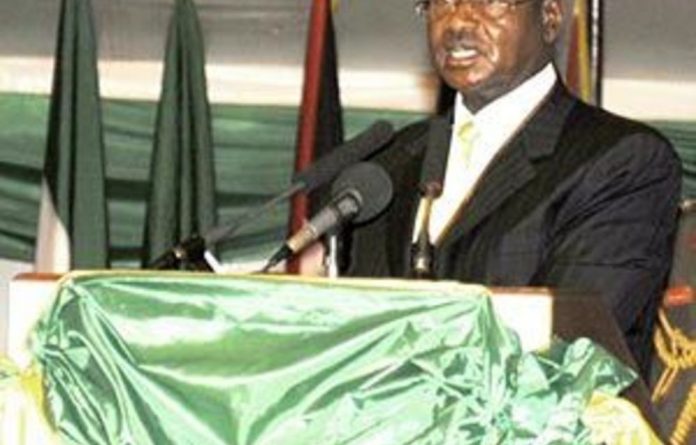 African leaders met behind closed doors on Monday to discuss boosting the African Union’s force in Somalia following a plea by Uganda President Yoweri Museveni to “sweep the terrorists” off the continent.

The AU heads-of-state meeting in Uganda came two weeks after Somalia’s al-Qaeda-linked al-Shabaab claimed suicide bombings that killed 76 in Kampala and as the North African arm of the terror network executed a French hostage in Mali.

“Let us now act in concert and sweep them out of Africa,” Museveni said on Sunday at the opening of the continental body’s 15th summit. “Let them go back to Asia or the Middle East, where I understand some come from.”

More than 30 heads of state from the AU’s 53 members gathered amid unprecedented security in the Ugandan capital, Kampala, with the growing regional impact of the Somali chaos topping the agenda.

The AU summit observed two minutes of silence for the victims of the attacks two weeks ago.

“The African Union stands with you, my brother President Museveni, and with the people of Uganda,” Bingu wa Mutharika, Malawi’s president and current chairperson of the AU, said in his opening remarks.

Museveni said many of those behind the Kampala attacks have been arrested and “interrogations have yielded very good information”.

The two bombings were meant to bully Uganda into pulling out of the AU mission in Somalia (Amisom), the last thing standing between al-Shabaab and total power.

Uganda reacted by saying it could send 2 000 more troops and urged more decisive international support, while the embattled Somali government argued the attacks were evidence Somalia required the world’s attention.

According to diplomats, Angola, Mozambique and South Africa may also pledge troops to Amisom, whose current deployment consists of just more than 6 000 Ugandans and Burundians.

Ping also reiterated that the AU was seeking a tougher mandate for Amisom under the United Nations Charter’s chapter seven, allowing it to take more aggressive action.

“If this request is answered positively, our troops will attack,” he said.

The al-Shabaab leadership has proclaimed its allegiance to Osama bin Laden, and the group’s first bomb attacks outside Somalia renewed fears that the Horn of Africa country could become a new safe haven for al-Shabaab.

Hostage killed
Even as AU leaders were meeting in Uganda on Sunday night, the terror network’s North African arm — al-Qaeda in the Islamic Maghreb (Aqim) — said it had killed a 78-year-old French hostage.

The information was confirmed on Monday by French President Nicolas Sarkozy and highlighted the risk posed by Aqim, whose area of operations is centred around the Sahel desert and straddles several countries.

Troops from the United States and the United Nations have previously not been able to crush the insurgency in Somalia, which has been without an effective government for two decades.

The continent’s leaders are also expected to discuss the future of Sudan, where the oil-rich south is due to hold a referendum on independence in January.

Uganda would theoretically have been compelled to arrest the Sudanese leader, who became the first sitting head of state to face a warrant from the International Criminal Court, over alleged crimes in Darfur.

AU leaders nevertheless rallied around their peer once again, arguing that the ICC risked fanning the flames of conflict in Sudan.

“To subject a sovereign head of state to a warrant of arrest is undermining African solidarity and African peace and security that we fought for for so many years,” AU chairperson Mutharika said Sunday. — Sapa-AFP

Ben Simon
Daniel Ben-Simon is an Israeli journalist and politician, who served as a member of the Knesset for the Labor Party between 2009 and 2013.
Facebook
Twitter
WhatsApp
Linkedin
Email
Telegram