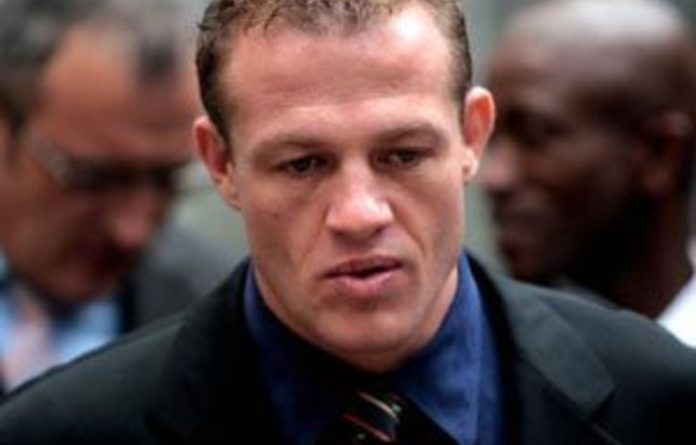 Glenn Agliotti’s advocate cornered boxer and hit man Mikey Schultz in the South Gauteng High Court on Monday afternoon, forcing him to admit that he had no direct knowledge of Agliotti’s involvement in the murder of Brett Kebble.

After Schultz spent the entire morning telling the court what happened on the night of Kebble’s death, it took advocate Laurance Hodes just more than five minutes to get Schultz to admit that he couldn’t implicate Agliotti directly in planning or executing Kebble’s death.

Schultz testified that all his instructions and knowledge on the Kebble murder and other matters Agliotti is charged for came from Clinton Nassif, Brett Kebble’s former chief of security.

Convicted drug trafficker Glen Agliotti arrived at the South Gauteng High Court on Monday morning to begin his first day in the dock for his alleged role in the “assisted suicide” of slain mining magnate Brett
Kebble.

Assisted suicide
Earlier on Monday, the court heard that an overheating car and a jammed gun led to the “assisted suicide” of mining Kebble being postponed twice.

Schultz was the first state witness to testify on Monday in the Kebble murder case, for which drug dealer Agliotti is in the dock.

Schultz’s gripping evidence made it appear as if the universe was conspiring against Kebble’s death.

Schultz told the court how a number of unforeseen incidents stood in the way of two previous attempts to kill Kebble, including the gun misfiring twice on one night.

Schultz explained how his former boss, and head of security for the Kebble mines, Nassif, arranged for Schultz, Nigel McGurk and panel-beating shop owner Faizel “Kappie” Smith to assist Kebble in his own suicide.

They were promised R2-million by Nassif for the shooting, said Schultz, dressed in a black suit with neatly cut hair.

On the initial evening of the planned shooting in September 2005, Schultz claims to have received phone calls from Nassif’s wife, Kerry, as well as from Agliotti, to call off the shooting.

A few days later, on September 26, Schultz’s wife’s Volkswagen Golf GTI, which he, McGurk and Smith were driving in to carry out the shooting in Melrose, overheated at the last minute, leaving them to find a garage and call off the plan. Schultz said that Kebble had been “furious”, because he had had to drive around the area looking for them for fear they had “picked up the wrong tail”.

On the third attempt, the next night, things didn’t go smoothly either. “Kappie flashed his lights and Kebble pulled over to shoulder of road,” said Schultz. “We pulled up next to him, my window was in line with his. This was the first time I’d ever seen Mr Kebble. He was in the driver’s seat, had both hands on the steering wheel. He looked at me then in front of him and lifted his right shoulder — I aimed at his head, like Clinton [Nassif] instructed me. I pulled the trigger but it did not discharge. I then climbed back into the car and said ‘Kappie go!'”

The hit men drove around the block, while Schultz said he loaded a new round of bullets into the chamber of the gun. When Kebble’s silver Mercedes-Benz pulled up next to them for the third time that night, Schultz said: “You could see the disappointment on his face. He gave me a look like to say, ‘Come on man, get this over with.’

“I pulled the trigger, this time the gun fired,” Schultz said, sighing. “I kept firing. I think it was more than five times. Our instructions, received from Clinton, were that Brett mustn’t suffer, he must die. This is why I shot him five times.”

Schultz was the state’s first witness on Monday morning. He testified about an alleged hit list Kebble gave to Nassif. On the hit list were the names of a number of businessmen, and noseweek editor Martin Welz.

The Scorpions, who took over the murder investigation from the police in 2006, came under fire for dishing out indemnity agreements to Nassif, Schultz and other people implicated in the murder. The state has argued that Agliotti and Kebble’s former business associate, John Stratton, were the masterminds behind the hit.