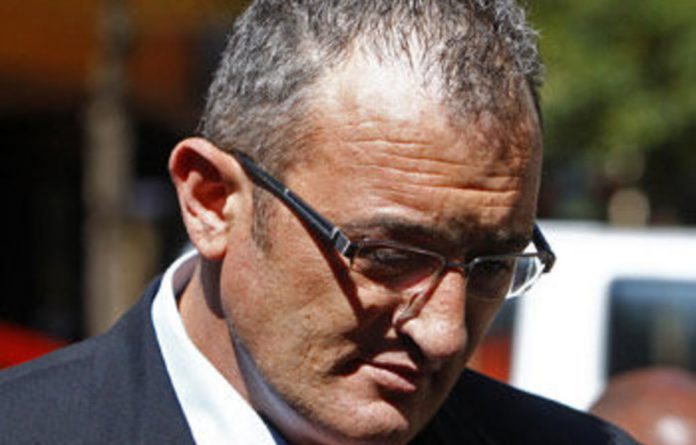 Former rugby player-turned-bouncer Nigel McGurk was the state’s second witness in its case against convicted drug trafficker Glenn Agliotti, on trial for the murder of Kebble.

The state is attempting to prove that Agliotti was the mastermind behind Kebble’s “assisted suicide”.

On Tuesday morning McGurk told the court how he and other hit men planned and executed the attempted murder of Allan Gray chief investment officer Stephen Mildenhall. He also testified this was not the first time he carried out “dirty jobs” for Nassif, and said he and boxer Mikey Schultz were regarded as Nassif’s “heavies”.

Neither McGurk, nor Schultz have directly implicated Agliotti in the planning or execution of Kebble’s murder. But McGurk claimed on Tuesday afternoon that Agliotti was responsible for paying them.

After killing Kebble in September 2005, McGurk said he had struggled to get money out of Nassif. He and co-hit man Mikey Schultz met Agliotti at The Grand strip club in Rivonia to talk about finances. “Mikey told me not to be stupid and not do anything to him [Agliotti]”.

At the meeting Agliotti allegedly told him he had paid Nassif for the hit on Kebble and that Nassif also owed him money.

Nassif also told them “Agliotti was handling the finances” for the Kebble murder, McGurk testified.

Agliotti’s counsel Laurance Hodes questioned McGurk on why he didn’t include his evidence of the meeting with Agliotti at The Grand in any of his affidavits to the Scorpions.

McGurk said he told the Scorpions about this during consultations, but was never asked to put it in a statement.

“You’ve got a memory like red wine, Mr McGurk, it improves over time,” Hodes told McGurk.

In evidence earlier on Tuesday, McGurk said that he, boxer Mikey Schultz and Faizel “Kappie” Smith were paid by Nassif to “take Mildenhall out of commission for three of four months”.

Mildenhall had been in the process of auditing Kebble’s mining companies and may have prevented a loan to them from being approved.

The road to Cape Town to carry out the hit was a bumpy one — the trio knocked over a buck, leading to problems with their car’s radiator. Nassif himself had to drive down to Colesberg, where they were booked into a bed and breakfast, to arrange for the towing of the car and rented a red Citi Golf for them to get to Cape Town.

Once there, the three sub-contracted two Capetonains, paying them a deposit of R50 000 to shoot Mildenhall. After waiting three days for Mildenhall to leave his house at the address specified, they realised they had the address wrong, and had to find the new one. “There were kids, it was next to a school, so we decided not to carry it out in the morning. Because of all the commotion,” said McGurk.

“We received a call from the shooters saying that the job had been done.”

Schultz testified on Monday that Mildenhall was shot twice in the shoulders.

The shooters gave McGurk Mildenhall’s keys and wallet, which contained his credit card and driver’s licence “to prove that the job had been done”. They cut-up the gun used to shoot Mildenhall and threw it into the sea.