Down the rabbit hole 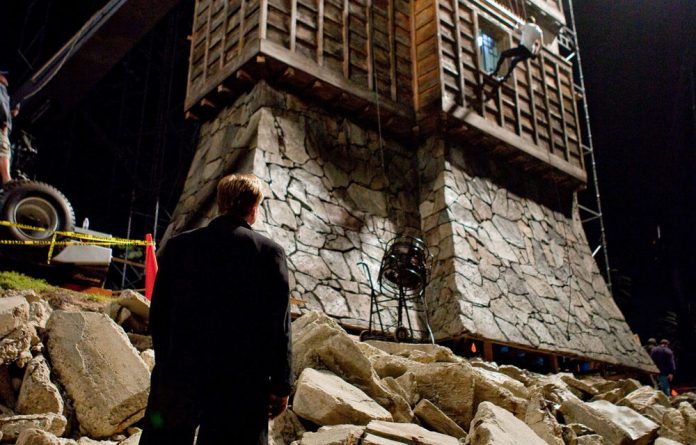 What with The Matrix, Avatar and now this, lying twitching in your sleep with electrodes stuck to your head could be the new rock ‘n roll. Christopher Nolan’s new movie is a colossal digital artefact, a virtual-reality sci-fi thriller set inside the dreaming mind, with brilliant architectural effects and a weirdly inert narrative inspired by Philip K Dick and Lewis Carroll.

At some stage in the distant future, the technology of industrial espionage will allow snoopers to invade the dreams of chief executives and pinch commercially sensitive information. Leonardo DiCaprio is Cobb, a specialist who both carries out these high-tech brain raids and trains executives to resist them. He operates with a crew of occult brain specialists who operate as though they are planning a heist or a con, drugging top business honchos, installing vast, detailed imaginary worlds inside their minds where they go into a lucid dreaming state, letting their subconscious guard down, in which condition his team will appear in various role-play guises and trick them into revealing, as it were, the recipe for Diet Coke.

Japanese plutocrat Saito (Ken Watanabe) offers Cobb the challenge of a lifetime: not to steal an idea, but to plant one. He needs Cobb to insinuate himself into the dreams of a dangerous young business rival, Robert Fischer Jr (Cillian Murphy), and somehow instil in him a determination to break up the family empire that is hurting Saito’s profits.

Cobb assembles an elite squad of cerebrohackers, including Ariadne (Ellen Page), Eames (Tom Hardy) and Arthur (Joseph Gordon-Levitt). They plan to drug Fischer on a 10-hour plane flight and create a triple-decker dream, a dream-within-a-dream-within-a-dream — which, Narnia-like, will last 10 years in Fischer’s dreaming mind. At the end of this, he will have arrived at a settled determination to break up his family firm.

And he doesn’t simply go to the deepest level first and then attain reality up through two successive waking episodes: he goes down and down and down. He, and we, could get something similar to decompression sickness: the bends. And there’s another problem; Cobb is plagued with guilty visions of his late wife, Mal (Marion Cotillard), invading this synapse world and threatening to become more real than either Cobb’s trickster dreams or his waking life.

There are some dizzying flourishes of FX magic in this movie. Cobb and Ariadne go for a stroll in the streets of Paris, which Nolan folds and tweaks and twists, with the avenues rising and falling like a pop-up book. They encounter a street that rises in front of them like a sheer rockface and, bracing a foot against it first, like Fred Astaire dancing around the walls in Royal Wedding, they proceed to walk straight upwards.

Later Arthur will fight with goons in a virtual hotel that suddenly swivels around: they plunge down a corridor that has become vertical, like a lift shaft, and later they will float around like spacemen or lost, drowning souls in a stateroom on the Titanic.

The best moment comes before any of this when, finding themselves chatting over coffee, Cobb remarks to Ariadne that the essence of a dream is that we remember only the middle, not the beginning. For example, he wonders idly, how did they reach this café? With rising panic, Ariadne realises she has no idea and that they are in a dream that Cobb has created. Playfully Nolan has exploited the cinematic convention of the “cut”: we, the audience, have accepted without question our own unexplained arrival in the middle of this scene.

Nolan is occasionally described as the inheritor of Stanley Kubrick’s mantle and there are allusions. The encounter between Cobb and Fischer in the weirdly long hotel bar with its undersea lighting feels like a scene from The Shining, and the impossible tsunami explosions of water or tinkling broken-glass showers are also derived from its famous lift-shaft blood deluge. Fischer’s final encounter with his father (Pete Postlethwaite) bears a trace memory of 2001.

But I don’t think Nolan is or wants to be the new Kubrick: Gaspar Noé has a much greater claim with his forthcoming film, Enter the Void. It is tempting to say that Nolan is the new Lewis Gilbert, director of The Spy Who Loved Me.

At the third dream level DiCaprio and Murphy find themselves skiing in naff white military snowsuit outfits – much less cool than the formal wear they modelled in the hotel — towards a perfunctorily imagined Dr Evil-style mountainside headquarters. I expected Roger Moore to zoom up, raise an eyebrow and take out these cyber whippersnappers with a single elderly karate chop.

With technical brilliance and ingenuity, there is something disconcertingly self-important about Inception, with a plot that clogs and flags markedly in its final act and, however gasp-inducing its effects and invented worlds, the story’s drive stalls — I can never suppress the suspicion that something more interesting might be happening in ordinary, unassuming waking reality. Invention runs lower once we’re on those snowy slopes and the hard narrative punch keeps disintegrating into a floating cloud of pixels. But what a display they make. —