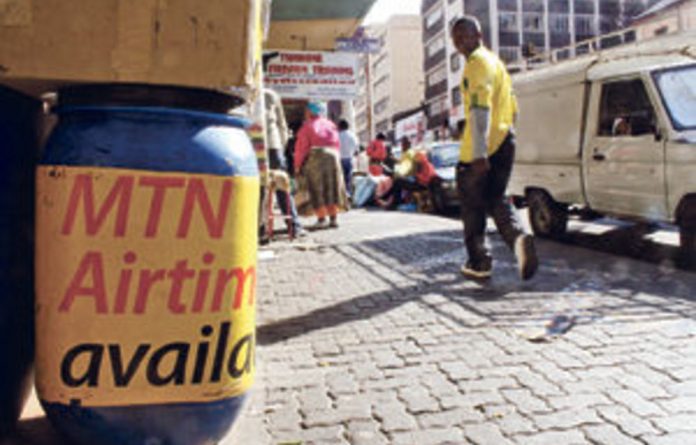 Given the 80% discount at which shares will be offered to ordinary black people who can come up with as little as R2 000 to invest, I would have thought that MTN’s latest BEE deal would have attracted more press comment.

Perhaps it is because the scheme will actually kick off only at the end of August — the prospectus has not yet been issued and some details have to be finalised. Or perhaps BEE public offerings are no longer novel, but reaction definitely seemed to be muted.

In the past some white South Africans have complained of being discriminated against in not being eligible for such deals. In any case, at more than R8-billion, the MTN Zakhele scheme, as it will be known, is a timely reminder that big deals are not yet quite extinct. This is not the first BEE scheme to offer shares at a discount, but it is the biggest discount yet.

The Vodacom retail scheme sold shares at a 10% discount, for example, and the Asonge scheme, which also involved MTN shares but was an initiative of the National Empowerment Fund, offered a 20% discount.

The way the Zakhele scheme works is that if you are an African, coloured or Indian South African, or South African-born Chinese person, you will pay R20 for a share that on Friday last week was going for around R118. This includes black companies, trusts, broad-based ownership schemes and groups such as stokvels.

And you will be getting a share, moreover, in a homegrown multinational that has carved out a place for itself in the world telecommunications market and with a consistent profit record. No transaction is without risk, including such examples of people’s capitalism, and I would never advise one way or another.

Past performance is certainly no guarantee of the future, though it may give a strong indication. Those black investors who bought Sasol’s shares at an 11% discount are still waiting for the share to climb back to the R366 discounted level, for example. It was R292 last Friday.

Lock-ins are common in BEE deals, but the Zakhele scheme has one of the shorter periods. The lock-ins commonly hold for 10 years. The longer the lock-in the greater the potential opportunity cost. You don’t want to lock up too much of your cash — you might really need that money but not be able to get your hands on it.

The official statements do not mention a dividend when discussing the public offer, however these can make all the difference. Special dividends paid off handsomely for those who bought Telkom Khulisa shares.

When discussing the shares of the attendant and much smaller employee share ownership scheme, worth around R152-million or 0.1% of the company, the company’s official statement does explicitly mention dividends. Eligible share ownership plan employees, MTN says, will be entitled to full voting and dividend rights and will be allocated 400 MTN shares each, though this will be scaled back if the value, at implementation, costs more than R50 000 per employee.

Shares will be issued to employees directly and they will have to hold them for at least five years. Though the employee share scheme was announced at the same time, it is completely separate and will go ahead even if the BEE deal is scrapped. And it will be if the offer is dramatically undersubscribed. If it raises less than about R425-million, MTN will not go ahead with the scheme.

If it raises less than R833-million but more than R425-million, it may decide to go ahead and make up the shortfall so as to sell the shares at a later date to black investors. No maximum has been set for investors at this stage. MTN says allocation will be made from the bottom up — that is, individuals and applications for the least number of shares will get priority.

Black employees and directors of MTN can apply for the scheme, but will not get preferential treatment. Individual black customers of MTN will get preferential allocation if the shares are oversubscribed, as long as they have been “Rica-ed”.

Company again top of the log
The MTN Zakhele BEE deal will once again re-establish MTN as the country’s biggest BEE company. This is a title it held for many years, courtesy of the stake held by black management and staff in the company through the Newshelf 664 vehicle. That stake, which had dropped to 13%, was unwound in December 2008 and MTN said it would use some of the shares it bought back from Newshelf for a new BEE transaction.

MTN is in the top 10 companies on the JSE by market capitalisation, the current value of all its shares. The company points out the deal will mean that MTN South Africa, the local subsidiary of the MTN Group, has an immediate 29% BEE stake. You might wonder how that could be, as the stake that is intended to be transferred to the public in this latest BEE deal is only 4%. That 4% is at the group level.

MTN is a diversified company with earnings streams from many regions and countries, including Iran. Though it has its roots in South Africa, this country now contributes only around 23% of MTN’s roughly calculated earnings. Also, the BEE Codes of Good Practice allow a company to subtract what are called “mandated investments” and investments from government and Section 21 companies from its pool of shares before calculating the BEE stake.

Mandated investments comprise pension fund and other collective investment entities such as medical aid schemes and unit trusts. A company can exclude up to 40% of its shares in terms of the exclusion principle, and MTN is doing just that. The effect is to boost the BEE shareholding and if you do the sums you do indeed get 29%. MTN points out that other BEE investments take the figure above 29%, but does not say by how much. This BEE deal is funded by a combination of a straight donation by MTN, with financial engineering, such as vendor finance.

The cost to MTN is around R2.2- billion in total, or around 1% of its market capitalisation. In addition, setting up the deal and the accompanying employee share scheme cost R162-million. As always, shareholders pay. They seem to be happy to do so, probably regarding it as money well spent to fortify MTN’s position in South Africa.

The share price has risen after the announcement of the deal. Whether such broad-based BEE schemes make much difference to the ownership structure of the economy in the medium term is doubtful, because most investors will probably want to sell after six years to benefit from a rise in the price of their shares. Many ordinary, mostly middle-class black people stand to benefit from this redistribution of wealth from shareholders to the public.

It will expose many people to the concept of share ownership, as former British prime minister Margaret Thatcher did in the United Kingdom with privatisation. For the company, it buys public loyalty and support, and is good for its reputation in general, as well as enabling compliance with the ownership section of the BEE codes. It has to be asked whether government ownership and BEE requirements have not contributed to less competition. But that is a matter for another
column.