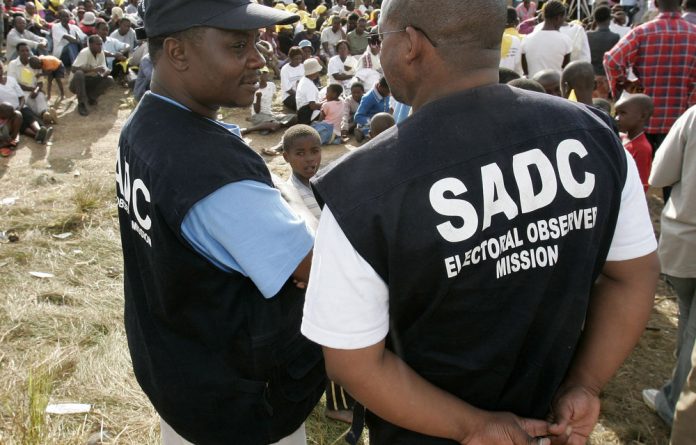 They came, were chauffeur-driven to expensive hotels, they ate and drank, closed their eyes, and off they went, to the airport, chauffeur-driven, overweight with Mugabe presents in their bags, dancing their farewells with purchased airport dancers carrying messages of solidarity in the struggle against the people.

African “airport election observers” are a strange phenomenon on our turbulent continent, in which serious election monitoring deficits stare us in the face in every country like starving babies in a drought. The observers are more familiar with African airports than the electoral landscape they are supposed to deal with. At airports they receive presidential treatment, with chiefs of protocol from the observed government even daring to give each one of the observers the elevated title of “Your Excellency”.

Their egos thus inflated, they are chauffeur-driven to the most expensive hotels where the only normal voters they access during their “observation visit” are waiters and bartenders employed for the occasion at the hotel, usually the Sheraton or Miekles, with prohibitive prices for everything to scare away any sane citizen and potential voter.

The timing of the arrival of these respectable gentlemen and ladies in suits is also painfully interesting. Two or three days before the elections, the meticulously dressed men and women of goodwill arrive with brand new briefcases probably full of their own countries’ old newspapers alongside some rusty accreditation documents authorised and issued by the same government they are meant to observe.

It is like criminals arriving at the court house in presidential limousines, guarded by the very same police who arrested them. The trial becomes fake and the police institution a mere farce.

In today’s Zimbabwe speculation is rife that elections will take place in 2011, new constitution or not, even though a new and democratically crafted constitution is an urgent pre-condition put on the table by the leadership of the Southern African Development Community (SADC).

Alongside other crucial conditions clearly stated in heaps of documents for the “unity government” to stick to, President Robert Mugabe publicly accepts the requirements in front of the SADC leadership, only to throw them out the window as soon as the leaders’ presidential jets take off from Harare International Airport. No questions asked, no heated discussions or even the mildest reprimand. It’s as if nothing was ever agreed and signed.

Meanwhile, a few metres from the Sheraton, in which the so-called election observers are entertained with wine and women, militia camps overflow with new political victims waiting to be amputated before finally being murdered and dumped in the nearest stream or forest.

Government-owned newspapers are awash with hate speech and the latest slogans proclaiming Mugabe “the supreme leader” who will rule forever. Peaceful demonstrators are teargassed in broad daylight in the streets of the big cities. From the air, militia camps and military bases scattered all over the country look like newly constructed villages of death and destruction. Senior army and intelligence officers have been deployed long back before the “airport observers” were even officially appointed by “friendly” countries to observe from the Sheraton and other expensive centres of Zimbabwean “hospitality”.

In preparation for the 2011 elections Mugabe’s dogs of war are already being made ready. Without any war in sight, his armouries are being re-stocked for that clearly visible enemy — the voter. Mugabe wants sanctions to be lifted so he can buy more armoured tanks, the latest Migs, tonnes of bullets and teargas canisters, AK47s and millions of assault rifles.

Opposition activists will have been eliminated long before any observers are mentioned in the electoral documents of the so-called independent Zimbabwe Election Commission appointed by The Supreme Commander, His Excellency, Head of State and Government, Commander-in-Chief of the Armed Forces, Patron of War Veterans and Father of the Nation, The Dear Leader.

In their posh hotel rooms the “airport observers” busy themselves with preparations for the next official briefing-cum-reception, cum-dinner-or-lunch, courtesy of the intelligence officers and chiefs of protocol. Official speeches of welcome drench their ears like summer thunderstorms while intelligence chiefs order more imported whiskies, wines and caviar.

The observers are no longer shy to forward their congratulatory messages to the head of state for the peacefully conducted, free and fair elections. Their visit has been as memorable as the elections, the result of which is already clear for all fair-minded people to see.

“Zimbabwean electoral authorities use too much ink for voters to dip their fingers in,” some observers will bravely reveal; the only fault they observe in these elections, the results of which are “absolutely credible beyond reasonable doubt”.

Thus, the reports the “airport observers” generate in their countries on their return do not go beyond primary school children’s classroom debates, the sound and fury of which do not even stir a mosquito.

I always wonder if these observers are given rudimentary training in matters pertaining to their grave missions and moral responsibilities.

During one Zimbabwean election saga, some constituencies recorded a turnout of more than 120%, and the “airport observers” were quick to clap hands for a job well done by Mugabe’s personally appointed election commission. Under such circumstances, with such an alarming turnout, it would seem even cows, donkeys and roosters voted.

The only free and fair elections in Zimbabwe are those which have not yet been conducted or imagined. During election campaigns, Mugabe has proved to be one of the most foul-mouthed leaders on the continent. The word “persuade” does not exist in his election vocabulary. I am reliably informed that the vulgarity of his electoral language is surpassed only by President Yayah Jammeh of The Gambia.

He will call his political opponents “traitors”, “puppets of the West”, “poodles of imperialist forces”, “political prostitutes”, “mangy dogs”, “unpatriotic hooligans”, “friends of homosexuals”, “tea-boys of the West”, “sellouts”, “colonialist puppets”, “enemies of the state” and many unrepeatable curses and insults.

It seems the SADC electoral guidelines on democratic elections forgot to include a clause on the necessity for courteous, polite language in the campaign processes of Southern African states. In normal countries political candidates who use vulgar, insulting language are penalised by disqualification from the elections.

But in Zimbabwe Mugabe receives thunderous applause when he calls the former British Prime Minister, Tony Blair, “a toilet” and former US ambassador Christopher Dell, “hell”, without realising that he has a delegation in those countries begging for money to buy Chinese arms of war.

“There will be war if we lose this election,” Mugabe said in the 2008 elections, without clarifying who the guns were going to target. But the observers ignored such outrageous language, which eventually led to political death, torture and pain among innocent citizens. Zimbabwean villagers now hate elections with a passion.

Election time is torture time, a time for Mugabe and his foot soldiers to harvest new orphans, widows and widowers, new disappearances and kidnappings, disfigured and petrol-bombed corpses and mutilated survivors, women’s buttocks bruised and mashed with heavy metal bars, a new hell on Earth instead of a glorious time to celebrate the right to choose dignified leaders for a positive vision of the land of their birth.

In Zimbabwe the law protects Mugabe from being insulted by the voters, but it does not protect the voters from shameless presidential insults. Anyone who insults the president risks rotting in Zimbabwe’s hell holes called prisons, where so-called offenders are tortured and starved to death before secret, nocturnal burials in shallow graves.

Somehow, African election observers and their colleagues from abroad seem to think an African election is free and fair if there is “a little violence” with a few hundred dead. Somehow, they condescendingly tolerate “a little barbarism”, which they would not accept in Sweden or Norway or Germany. African leaders relish that attitude. It gives them latitude enough to eliminate the few real or imagined political opponents who might cause them many a sleepless campaign night.

Observers of African elections should arrive at least six months before the elections to travel freely around the country to observe the build-up to election day without being led by the nose of protocol and intelligence officers to long-rehearsed election performances enacted to impress the men and women from “the airport”.

The false tranquillity and peace on election day is simply a mask worn to hoodwink the observers, who monitor with their hearts already boarding the next flight before even the first ballot paper is counted.

“Airport election observers” approve these tatters of democracy simply because they wear the same garments in their own countries.

Chenjerai Hove is a Zimbabwean writer living in exile