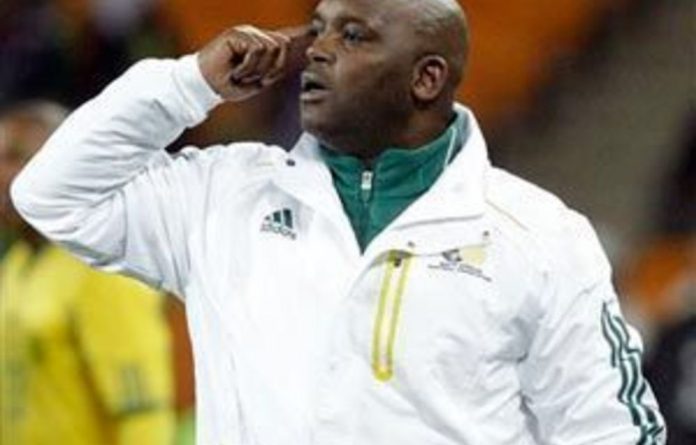 A month after the stadium hosted the World Cup final, a first-half goal from Katlego Mphela was enough to secure the win as Bafana prepare for the 2012 Africa Cup of Nations, starting next month.

Mosimane kept faith with nine of the players who started in the win over France in South Africa’s final World Cup game, with Itumeleng Khune restored in goal and Morgan Gould replacing injured Bongani Khumalo at centreback.

Ghana made six changes from the side that lost in the World Cup quarterfinals on penalties to Uruguay, but that did not stop a near-50 000 crowd braving chilly winter conditions.

President Jacob Zuma was introduced to the teams before the kick-off, and it was the hosts who started brighter, with Mphela denied by a great save from Richard Kingson.

With Netherlands-based striker Bernard Parker selected beside him in attack, Mphela looked increasingly dangerous as the half wore on and was unlucky not to score in the 15th minute when his shot was deflected wide off Kingson.

Tame effort
Ghana struggled to create any meaningful chances, with only a tame effort from Kwadwo Asamoah to show for all their midfield possession.

Injury stoppages slowed the rhythm of the match as the clock ticked toward half-time, but a superb pass from Steven Pienaar saw Mphela finally break the deadlock on 42 minutes with a close-range shot.

Captain Aaron Mokoena made way for Siyabonga Sangweni at the break and it was Ghana who then went on the attack.

Substitute Yaw Antwi showed blistering pace after being introduced for Andre Ayew, and his cut-back was met by a fierce shot from Asamoah Gyan — whose last-minute penalty miss against Uruguay cost Ghana a place in the World Cup semifinals as they went on to lose on penalties — that Khune did well to hold at the second attempt.

A quick break from Parker almost gave Bafana a chance to double their lead, but Mphela failed to properly control the ball.

With the coaches making several changes in the final quarter there were few scoring chances, with the best falling to Ghana substitute Cofie Bekoe, whose shot from a short free-kick was palmed away from danger by Khune. — AFP