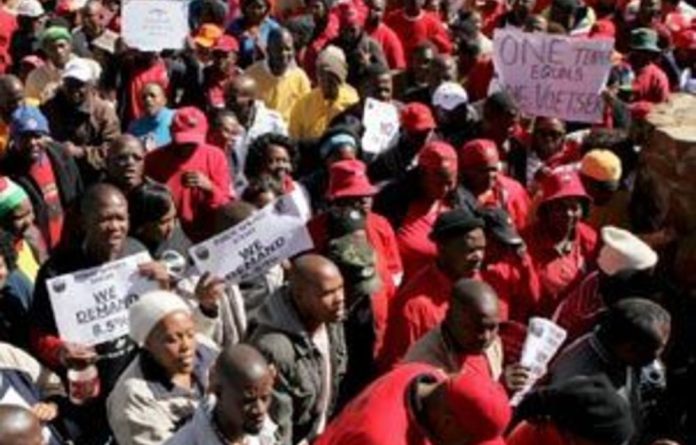 Business organisations have called for the speedy resolution of a national public-service strike that started on Wednesday, as unionists declared that the stayaway would escalate.

The South African Chamber of Commerce and Industry (Sacci) said it was with “great disappointment” that it noted no agreement had been reached between unions and the Department of Public Service and Administration.

Public-service unions embarked on an indefinite strike on Wednesday after rejecting the government’s revised wage offer. The M&G headed to Thokoza where members of the National Health and Allied Workers’ Union were protesting outside the Natalspruit Hospital.

“Sacci condemns the undisciplined behaviour of workers in particular instances, notably the intimidation by teachers of pupils attending schools, and by striking health workers of those who willingly report for work,” the organisation said in a statement.

“Such behaviour will impact negatively on global perceptions of the business environment in South Africa.”

It said the strikes also added to pressures related to service-delivery backlogs.

The Congress of South African Trade Unions (Cosatu) and the Independent Labour Caucus (ILC) announced on Tuesday that “the strike is on” after their members rejected the government’s offer of a 7% salary increase and a R700 monthly housing allowance.

Sacci said the failure to reach an agreement had far-reaching implications.

“The failure to reach an agreement has an impact on the economy that stretches beyond the Public Service Commission,” it said. “Additional pressure on public-sector finances and the subsequent need to increase the taxes will have consequential downstream impact on both business and consumers.”

The National Youth Development Agency (NYDA) also expressed concern about the strike, especially its impact on the education sector.

“In light of the upcoming preliminary matric exams, we view this as highly unfortunate,” said NYDA chairperson Andile Lungisa.

It would have devastating consequences for learners who had already lost five weeks of learning as a result of the Soccer World Cup.

“It is about time that the working class demands to be compensated for its worth by the capitalist state.

“It is not only mischievous but irresponsible for government to continue to offer peanuts to workers whilst often lazy public representatives continue to rake hundreds of thousands in undeserved salaries,” said Sasco in a statement.

Education authorities on Wednesday tried to minimise the effects of the strike.

“Our … objective is to ensure that learners continue to read, write and calculate.

“We urge parents to ensure that their children bring extra learning materials to school,” he said.

Examples of such learning materials include library books, textbooks, crosswords and past examination papers.

“The department will, wherever possible, provide teaching alternatives and will ensure that as many resources [as possible] are directed to our grade 12 learners, who have 55 days to go till their first practical NSC [national senior certificate] examinations.”

“Under these conditions, the best way to learn is to establish voluntary study groups where learners can help each other go through past papers and study notes,” Creecy told reporters in Johannesburg.

‘There’s no need to intimidate’
The South African Democratic Teacher’s Union [Sadtu] has urged striking teachers not to intimidate others, following reports of classroom disruptions in the Vaal Triangle in Gauteng earlier this week.

She said most of their 245 000 members were expected to take part in the strike.

ILC spokesperson Chris Klopper said only Sadtu and the National Health and Allied Workers’ Union were taking part in the strike on Wednesday.

“It is yet to escalate … the other unions are still balloting their members,” said Klopper.

He said the 200 000-strong Public Servants’ Association, which is part of the ILC, was expected to join the strike on Thursday. — Sapa