Nurses will take the pain 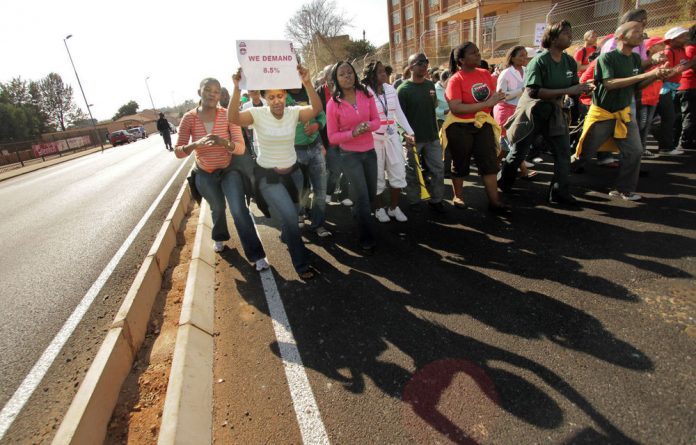 It is illegal for nurses to strike but the state will find it difficult to take disciplinary action against them and nurses are aware of it.

Nursing is one of the essential services, meaning workers may not legally strike. Yet the major nursing unions, with membership in the tens of thousands, joined the strike this week.

Freddie Mohai, the general secretary of the South African Democratic Nurses’ Union, said nurses were aware that striking could lead to them forfeiting their pay and facing demotion, dismissal or charges of misconduct.

“Members are ready to make the supreme sacrifice to secure an agreement,” he said.

But Sakhela Buhlungu, an organised labour expert, said the state would be “playing with fire” if it singled out nurses for disciplinary action. “Other sectors would rise up in solidarity and the strike would spiral out of control.”

Public sector workers, particularly nurses and teachers who had scarce skills, had “absolute leverage” in this situation, Buhlungu said. “The law aside, this is about power.

“The thing the unions have going for them is their numbers and the support of Cosatu,” he said. The “best thing for government to do now is to negotiate around wages”.

But Dumisani Nkwamba, a spokesperson for the Department of Public Service and Administration, said there would be “consequences” and “disciplinary measures” for nurses who joined the strike but did not elaborate on these.

Fidel Hadebe, the health department spokesperson, also could not comment on what measures would be taken against striking nurses. “The minister will have to consult his counterparts in Cabinet and in the provinces about the issue,” he said.

Nurses seemed undeterred from joining the strike this week.

“Workers are really angry. They’re prepared to go on [striking] for as long as the employer doesn’t come to the party,” said Asanda Fongqo, the spokesperson for the Democratic Nursing Organisation of South Africa.

“We have tested the legal bounds because we know the employer might employ dirty tactics as it did in 2007,” Fongqo said. Many nurses were issued with letters of dismissal during the 2007 strike but unions negotiated after the strike ended to have them withdrawn. Disciplinary action was largely restricted to warnings.

Fongqo said the government’s refusal to revise its wage offer would only increase union members’ anger. “We will now intensify the strike action because we’ve exhausted all our options at the bargaining council. This means prolonging the strike and frustrating the public service until they [government] come to their senses and produce a revised offer.”

Sizwe Pamla, the communications officer for the National Health and Allied Workers’ Union, said he expected nurses, medical officials and support staff to withdraw their services during the strike. “Expect a total shutdown,” he said. “Only those [workers] who we’ll identify will be allowed to go in —

“Many nurses are renting backroom houses in townships or living in dilapidated flats in rundown areas,” Pamla said. “They look forward to wage increases all year and then find it’s a pittance. Then they look at municipal workers who were given 13% and the situation becomes very difficult.”

The Health Department is considering how to deal with hospitals.

Hadebe said: “We can refer patients to less affected facilities because it’s unlikely that all facilities will be affected in the same way. There’s also nothing stopping us from transferring people across provincial borders, forging partnerships with the private sector or working together with the military health sector.”