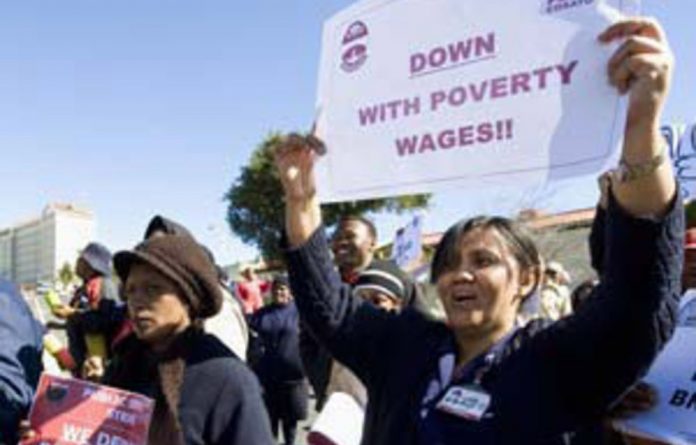 Public-service sector unions and the government could hold renewed wage talks in the next week in an attempt to resolve the impasse which has resulted in increasingly violent strikes across the country.

Public Service and Administration Minister Richard Baloyi had undertaken to approach unions in the next week about new talks, the Independent Labour Caucus (ILC) said on Friday.

The ILC, which represents 460 000 workers, said it held “cursory discussions” with Baloyi on Friday.

“… But the ILC indicated that the minister must approach all unions jointly for such discussions as it is of vital importance that all parties must take ownership of a possible solution,” ILC chairperson Chris Klopper said in a statement.

“He [Baloyi] undertook to approach unions in this regard again during next week.”

The ILC said it wanted talks sooner rather than later as the country was in the midst of a crisis, and could not afford the luxury of further procrastination.

“… Everyone knows that the matter must be resolved at one stage or the other. The ILC stated once again that it is available to explore solutions and will approach all negotiations and discussions with a mature and pragmatic attitude.”

The Congress of South African Trade Unions (Cosatu) was unaware of further talks with the government.

However, spokesperson Patrick Craven said Cosatu was “open” to them.

“We are always open to further discussions … That is what we have been calling for, a new offer,” he said.

Striking public servants shut down schools, blocked roads and barricaded hospitals for a third day on Friday. Clashes between strikers and the police drew widespread condemnation.

On Friday, the ILC described as “misleading” Baloyi’s statement that he intended unilaterally implementing the government’s offer of a 7% wage hike and R700 housing allowance, which workers have rejected. Craven described it as “illogical”.

There was only limited room for unilateral implementation under the Public Service Coordinating Bargaining Council rules, said Klopper.

“Attempts to unilaterally implement will not only lead to a further hardening of bargaining positions and the determination to proceed with industrial action, but will also seriously jeopardise the relationship between the state as employer and all unions.

“The employer must realise that an attempt to ignore the present stalemate, and opting for an easier solution than hard bargaining, will complicate labour relations and bargaining even further.”

Violence condemned
The unions are demanding an 8,6% pay increase and a housing allowance of R1 000 a month.

The ILC said it noted the violence and intimidation at schools and hospitals.

“Such hooliganism cannot be tolerated and must be condemned in the strongest possible terms.

“The ILC urges the employer to comply with its responsibilities in this regard … identify the culprits, charge them in terms of the applicable disciplinary measures and, if required, dismiss them.”

Craven said Cosatu was concerned at the violence.

“We are obviously concerned, but we cannot put all the blame on the side of the workers,” he said.

“The unions and government need to get together at local level to iron out these problems and prevent unnecessary violence.”

He also condemned “provocation” by the employee or law enforcement agencies.