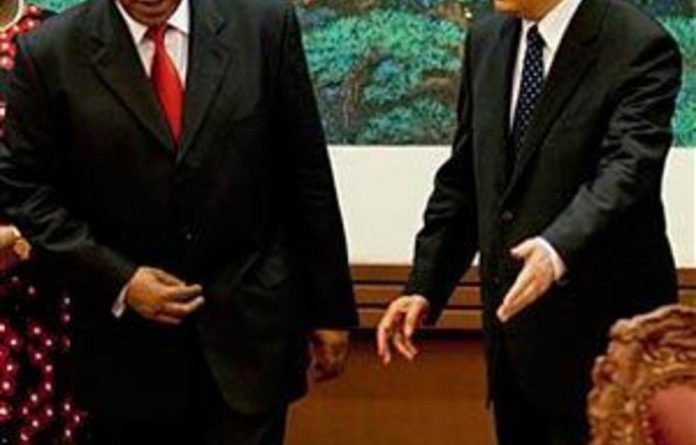 The visit is seen as an opportunity for the two countries to explore ways of expanding their already sizeable trade ties — and also a chance for two emerging powers to solidify their strategic partnership.

Zuma — who visits Beijing and Shanghai during a three-day trip he has called “crucial” — was welcomed by Hu at Beijing’s Great Hall of the People before the two leaders went into talks.

“The talks will surely take the relations between the two countries to greater heights,” Zuma said in a speech to business leaders ahead of his meeting with the Chinese president.

After their talks, the two sides signed an agreement upgrading ties to a “comprehensive strategic partnership” and inked cooperation pacts on mineral resources, rail transport, the environment and other areas.

Bilateral trade — which has been expanding since the establishment of full diplomatic relations in 1998 — last year totalled about $16-billion, according to figures from both countries.

“Trade statistics with China continue to reflect the potential that still exists for expanding the commercial relationship,” the South African Foreign Ministry said before the visit.

Booming economy
Zuma said on Tuesday that the expansion of foreign trade was a way for his country to “improve the quality of life of all South Africans”.

Beijing also has unveiled a series of major investments since ploughing $5,5-billion into Standard Bank nearly three years ago.

In May, Chinese companies reached deals to build a $217-million cement plant and invest $877-million to take control of a small South African mining company and build a new platinum mine.

South African Trade and Industry Minister Rob Davies on Tuesday told business leaders in Beijing that his country’s exports were too dependent on primary goods and that he hoped Beijing could buy more “value-added” goods.

Zuma, who is accompanied by a number of key ministers, is due to meet Premier Wen Jiabao and other senior Chinese officials on Wednesday. He was due to visit the World Expo in Shanghai on Thursday. – AFP