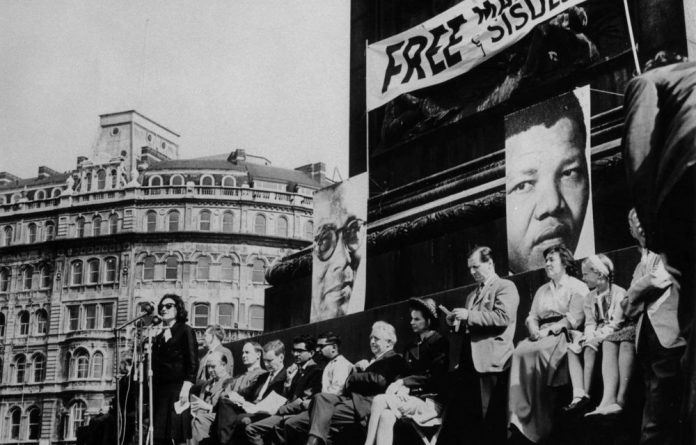 Ruth First fought injustice and pursued a better life for all Africans, but she was killed by a letter bomb 12 years before the liberation of her country

‘Death is an exercise in pan-Africanism.” Kenyan intellectual Ali Mazrui’s expression aptly captures Ruth First’s pan-African martyrdom 28 years ago this week at the age of 57. As she noted: “I count myself an African and there is no cause I hold dearer.” A letter bomb dispatched by the apartheid regime killed First in Mozambique in 1982. She was with Pallo Jordan, head of research of the ANC, at the time. When I spoke to Jordan recently in Cape Town he was still visibly shaken, three decades later, recalling the incident and his own serious injuries. At the Truth and Reconciliation Commission (TRC) hearings a decade after the horrific assassination, the apartheid government’s intelligence officer, Craig Williamson, was granted amnesty for First’s killing in exchange for his confession.

ANC stalwart Walter Sisulu described First as “one of the most dynamic personalities in the movement”. Nobel laureate Nadine Gordimer called her a “radical activist, thinker and a fine writer”. During her lifetime, First published seven major books and edited the biographies of three pan-African icons — Nelson Mandela, Govan Mbeki and Kenya’s Oginga Odinga. Fellowships have subsequently been named after her at Wits and Rhodes universities.

A committed pan-Africanist, First did not cut off Africa’s head at the Sahara desert and wrote and conducted fieldwork across the continent. But her pan-African legacy has been curiously neglected in a South Africa that often erroneously identifies the ideology with the radical Pan Africanist Congress (PAC). Even First’s husband — struggle hero Joe Slovo — could not really understand why she was so interested in African countries far beyond the Limpopo. Her pan-Africanism was clearly ahead of its age, with many in post-apartheid South Africa still unsure whether they are within, or apart from, Africa.

First was born into a Jewish family in 1925, with her grandparents having emigrated from Russia and Lithuania. Both were members of the Communist Party of South Africa and inculcated in their daughter a sense of social justice at an early age. As a child First was shy and began hiding behind her famous dark glasses. Many who knew her often referred to her sense of style and obsession with Italian shoes. She had a brilliant mind; a forceful — and to some intimidating — personality and could be prickly and domineering.

First and Slovo had three daughters, who often felt abandoned by and embittered about their parents’ frequent absence, as Gillian Slovo’s 1997 Every Secret Thing revealed. As a journalist for 15 years, First wrote stinging exposés of exploited black farm workers and miners and covered bus boycotts. She read Nigeria’s Nobel laureate, Wole Soyinka, and Kenya’s Ngugi wa’ Thiongo. She was a fine investigative journalist, but her work was banned by the apartheid government. She helped to draft the 1955 Freedom Charter but was prevented from attending the Congress in Kliptown. She was arrested and imprisoned for 117 days in 1963 — an experience vividly captured in a 1965 book, a 1966 film in which she played herself and a 1988 movie, A World Apart, written by her daughter, Shawn Slovo.

Following the harrowing jail experience First fled into exile and never returned to South Africa. Eventually moving to Britain, she plunged into the activities of the Anti-Apartheid Movement. She effectively betrayed her own race and saw herself as defying the values for which many white South Africans stood. Many of her tribe regarded her as a traitor.

First’s first book, in 1963, South West Africa, was a pioneering work about South Africa’s export of its racist methods to Namibia. She taught a course in women’s studies at England’s Durham University and particularly inspired female students, attempting to build up their confidence and intellectual independence in a male-dominated environment: a battle she fought consistently throughout her life, as ANC stalwarts Albie Sachs and Ben Turok confirmed. First took a sabbatical at Tanzania’s University of Dar es Salaam, a hotbed of Marxist radicalism. This experience of witnessing independent academics waging lively debates while seeking to engage with the socialist regime of Julius Nyerere would influence her own move to Mozambique.

For the last four years of her life, between 1978 and 1982, First worked as research director at the Eduardo Mondlane University in Mozambique — ironically named after the martyred Mozambican liberation leader who was killed by a letter bomb in Tanzania in 1969. Her centre was a think-tank to train the cadres of the ruling Front for the Liberation of Mozambique party. First’s work also focused on the country’s migrant labour system with South Africa. Some of this research was conducted with ANC policy intellectual and the current minister of trade and industry, Rob Davies, who recently told me that First saw no contradiction between being simultaneously supportive and critical of the Mozambican government.

First was sceptical about the support that many Western academics provided to one-party states and “charismatic leaders” in Africa in the 1960s. This intrepid scholar-activist traversed Africa, conducting interviews with peasants, politicians, military men and mandarins in a bid to understand the phenomenon of the coup d’état in countries such as Libya, Algeria, Nigeria, Ghana and Sudan. In the process she produced the seminal The Barrel of a Gun in 1970. Four years later she published Libya: The Elusive Revolution, based on personal interviews with Moammar Gadaffi and other Libyan personalities.

So, what is First’s legacy three decades after her tragic martyrdom? She was often prophetic in her judgments: her scepticism about Soviet and Chinese communism, one-party states and military rule in Africa, the durability of apartheid in Namibia and South Africa and Ethiopian control of Eritrea all proved, in the end, to be correct. She saw more clearly than most the importance of economic sanctions in forcing political change in South Africa.

Algeria’s founding president, Ahmed Ben Bella, famously implored African leaders in 1963 to “die a little or even completely so that the peoples still under colonial domination may be free and African unity may not be a vain word”. First died so that Africa could be free and united. Tragically she did not live to see the liberation of her own country.