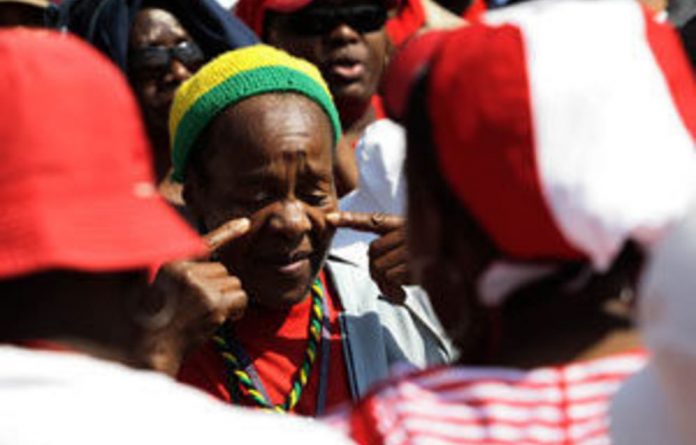 Thousands of striking public servants took to the streets in mass marches countrywide on Thursday, vowing to continue with a disruptive strike that has pitted trade unions against the government.

In Johannesburg, workers danced, blew vuvuzelas, sang songs against President Jacob Zuma, and chanted: “We are going, we are going to Luthuli House.”

“We will stop striking as soon as the government gives us what we want,” said National Education Health and Allied Workers’ Union (Nehawu) member carrying a placard which read: “Zuma, I’m your Standard Two teacher”.

Another poster read: “Prostitutes are earning more than teachers”.

“We are prepared to strike as long as our demands are not met. We hope that the government will respond. If it does not, the strike will continue,” said Tseki.

A large police contingent watched the marchers as they headed to the office of Gauteng Premier Nomvula Mokonyane.

‘We behaved, now reward us’
“We want the government to come forward with an improved offer,” said Monica Venter, the Public Servants’ Association provincial manager in Johannesburg.

“The reason why we are protesting is to show the government that the public servants are angry.”

One placard read: “We behaved during the World Cup. Now reward us with 8,6%.”

Cosatu and the Independent Labour Caucus were staging marches in all provinces to demand an 8,6% salary increase and R1 000 monthly housing allowance.

The government has offered them a 7% salary increase and R700 housing allowance, excluding a 1,5% pay progression.

As 1,3-million union members stayed away from work, the SA National Defence Force (SANDF) increased its support of hospitals.

SANDF spokesperson Siphiwe Dlamini said 2 812 soldiers had been deployed to help out at 47 hospitals countrywide.

“We are getting more requests … mainly for doctors and nurses,” he said.

“We have also brought in more soldiers to help keep the places clean and tidy.”

Dlamini said he was unfazed by threats from soldier unions to strike in solidarity with public servants.

“I am having peaceful nights … the soldiers know the rules and regulations,” he said.

The SA National Defence Union (Sandu) said on Thursday it would make an announcement on Friday about taking part in a solidarity strike, as called for by Cosatu.

“The problem is, if this problem is not solved, there’s a possibility that we might be seen as scab labour,” said Sandu spokesperson Jeff Dubazana.

“We are not going to allow our workers to be seen in that particular fashion. That is why we are planning action.”

He said Sandu members would “go on a march” or picket, but when asked if that meant they would not stay away from work, he replied: “It can be picketing for the whole day.”

‘Reasonable’ demands
Dubazana blamed the situation on the government’s “lack of leadership”.

“What the public servants are asking … it’s very reasonable, what they should be asking for is 16%,” he said.

“Soldiers’ social economic conditions are much worse than the teachers and nurses,” Mvovo said.

“We are calling on our members not to act as scab labour during this period,” he said.

Mvovo hoped the wage dispute between the government and public service unions would be resolved by the time the union meets on Sunday. He acknowledged that a strike by soldiers would have a crippling effect.

Not only hospitals have been affected by the strike; many schools are closed throughout the country and several provincial education departments have postponed preliminary matric exams for two weeks.

The SA National Aids Council (Sanac) expressed concern on Thursday about the affects of the strike on HIV-positive people, saying it had received reports of patients struggling to get access to medicine. – Sapa