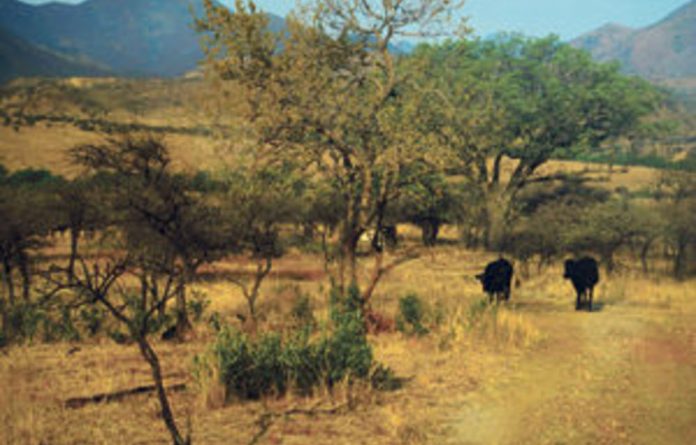 At least 10 rhinos are known to have died in Mpumalanga’s Songimvelo game reserve in the past year, either by drowning or poaching. And conservationists are pointing fingers at an “illegal fence” erected by land claimants, which has cut 13 000ha from the reserve for the grazing of cattle.

Concern is mounting about the future of Songimvelo, near Badplaas, as cattle graze in the reserve, poaching escalates and the land claim remains unresolved. Last week the Mpumalanga Parks and Tourism Agency moved 23 rhinos from the reserve to another park to protect them from poachers. This was after another rhino was killed, in addition to five rhinos that were poached earlier this year.

Another four rhinos drowned when the fence cut them off from their customary grazing areas, forcing them to cross a river. Accusations are flying that “cattle barons” in the Ndwanda Trust, land claimants from the Badplaas area, are driving the invasion. The largest provincial reserve in South Africa, Songimvelo is part of a proposed transfrontier park and world heritage area.

In 1995 it proudly announced that its white rhino population was the first in the world to be DNA-mapped and it was the darling of international donors for almost a decade. As the prime anchor project, it holds the key to the future of the region, says John Allen, a consultant for business interests in the area.

The desperately poor locality has been identified as a priority tourism area in Southern Africa, with the least tourism infrastructure but the highest potential. “It is a natural, scientific and cultural treasure trove with an impressive landscape,” Allen said.

“It falls within the quarter-degree grid of the highest known plant diversity in the province and has some of the most important geological localities on the planet. It is recognised worldwide as an area of high conservation value.” However, the excision of 13 000ha of the best tourism land had “set the reserve on course for failure and collapse” said Allen, who has publicly branded the land claims fraudulent. He said tourism has come to a halt.

As far as the Mail & Guardian could establish, the 13 000ha has not been deproclaimed, meaning that it is still part of the reserve.”We are really concerned about Songimvelo,” said André Botha, chairperson of the Game Rangers’ Association of Africa. “That fence is not lawful according to the National Environmental Management Act and presents a threat to the area’s biodiversity.”

Professional birding guide Peter Lawson said he had seen cattle grazing alongside herds of giraffe, eland, impala and other game. “I noted an extensive game fence under construction,
stretching across the reserve as far as I could see and in places cutting off game from the Komati River,” Lawson said.

Mpumalanga Parks and Tourism Agency spokesperson Kholofelo Nkambule refused to comment on the matter “due to its sensitivity” and because “it is sub judice and subject to litigation”. He said the agency’s legal team is attending to Songimvelo. But agency sources said they are
concerned that Songimvelo could cease to exist and that Mpumalanga Parks is not fighting hard enough for its survival.

“The way the claim is being handled by the agency does not bode well for the future of the reserve,” said an employee. The agency itself is rumoured to be close to collapse, with at least four senior managers on suspension, the board seeking a high court interdict against unionised workers and union claims of irregularities by senior management.

A former agency chief executive, who left under a cloud, allegedly authorised the invasion of the reserve by land claimants, despite the claim not being finalised. The Land Claims Commission and Mpumalanga’s department of agriculture, rural development and land administration, then headed by current Mpumalanga Premier David Mabuza, financed the fence.

Mabuza is said to have taken a close interest in the claims around Badplaas and the cattle venture. His spokesperson referred all queries to the agriculture department, who did not respond to emailed questions. One of the claimants’ leaders, Douglas Nkosi, said the claimants were very concerned about escalating poaching in Songimvelo and urged the Mpumalanga Parks and Tourism Agency to do more.

He said the fence was necessary because cattle were grazing inside the reserve, endangering its tourism potential. Claimants were looking to secure alternative land outside the reserve for their cattle, he said, but were using land in Songimvelo in the meantime. There remained 25 000ha of land for conservation, Nkosi said.