Maputo mayhem not just about food 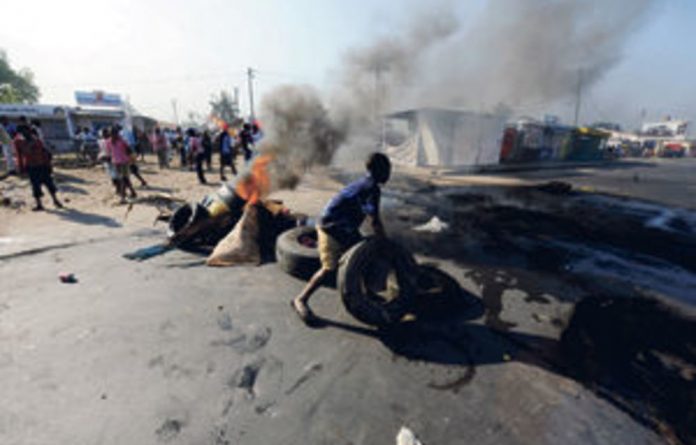 ‘This strike is about the hike in prices, but more than that, it’s about injustice. In Mozambique there is injustice, which should not exist in a country where people are at peace.”

The view of 34-year-old Maputo resident Albino Mkwate explains the intensity of the protests that hit the Mozambican capital on Wednesday. Ordinary Mozambicans are up in arms, not just because of the high cost of water, fuel, transport and bread, they feel that they are being ignored by the government.

At least four people died after police opened fire on demonstrating crowds with rubber bullets and live ammunition. Some residents put the figure at 13. Angry groups stoned security forces, who deployed bakkieloads of men and armoured vehicles. Maputo residents woke on Wednesday morning to whispers of roadblocks, no public transport and closed schools.

Text messages were circulated the day before, encouraging people to join the strike in response to the high price of essentials. Mozambican law requires a licence to stage public protests. In the past the leaders of illegal demonstrations were arrested and jailed, said Fernando Veloso, the director of Canal de Mozambique, a local newspaper.

“The people were scared. And for the first time, today, they were not afraid,” Veloso said. By 8am a haze of smoke had risen over the Mozambican capital from tyres burning in the streets, as reports came in of rioting in suburbs and townships just outside the city centre.

On the Avenida dos Acordos de Lusaka smoke lay thick on the road, as crowds marched with grim purpose and gunshots rang out in the distance. Horatio Antonio showed the bandages on his arm and chest where he was hit with rubber bullets while walking his daughter to school.

Holding the turquoise pellets in one hand, he spoke passionately about how the price of bread had risen “extortionately” in the past month. The price of bread rose 13% on Wednesday, while electricity and water costs also increased.

Last month fuel prices soared, an increase partly attributable to the government’s efforts to maintain prices at non-market rates during the 2009 election year. Between July 2009 and 2010 the government spent $105-million (R765-million) on fuel subsidies, according to Veloso. Protests against the cost of fuel in early 2008 turned violent, with six killed.

On Wednesday the Mail & Guardian saw police firing at the protesting crowds. A man was shot through the wrist by a rubber bullet; another, with bloodied legs, was carried to the kerb by fellow protesters.

Someone began shouting that a child up the road had been hurt. Thirteen-year-old Elio Rute lay prone on the pavement, his schoolbag by his side. Protesters complained about injustice and unfairness and of a government that does not listen to its people.

In an interview on state television Interior Minister Jose Pacheco called the protesters “outlaws and criminals”, while President Armando Guebuza called for people to turn in the instigators. By early evening smoke was still rising from the barricades of burning rubbish, as looting broke out again.

Every vehicle in the combat zone had its windows smashed. Ambulance sirens could be heard heading for the general hospital as the sun set. Clashes took place in at least seven different suburbs around Maputo.

After Pacheco’s statement text messages began circulating asking protesters to “go on”. Despite a partial return to work on Thursday, clashes between police and demonstrators continued in the streets of the capital.

Why the discovery of natural gas in Mozambique has produced tragedy