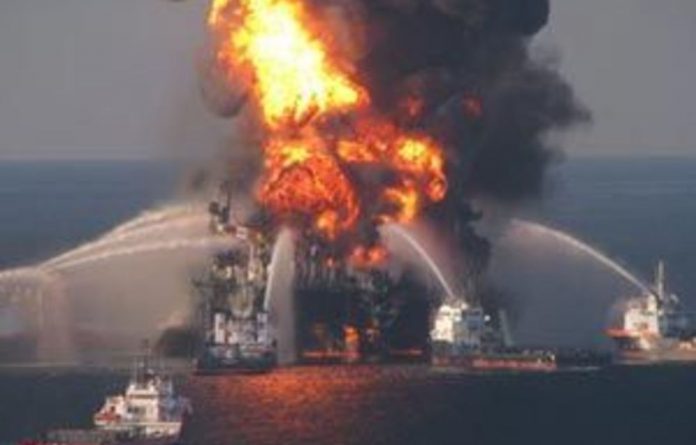 BP sought to spread the blame for the Gulf of Mexico oil disaster on Wednesday, setting off a battle of oil-industry giants with tens of billions of dollars in potential fines and legal liabilities at stake.

The British energy giant released a report concluding that a “sequence of failures” was to blame for the April 20 explosion that killed 11 people and unleashed 4,9-million barrels of oil in the worst-ever maritime spill.

While admitting some mistakes, BP exonerated its well design and apportioned a large share of the blame to faults made by rig owner Transocean and contractor Halliburton, which cemented the well.

The contractors responded by calling the report flawed and self-serving, while also asserting that BP was ultimately responsible for overseeing and approving all work done on its well.

The four-month probe, led by BP’s head of safety and operations, Mark Bly, is viewed as key to how the firm plans to defend itself in legal proceedings involving the spill.

“This report likely does its job in providing ammo [ammunition] for BP in future court cases, where the avoidance of the charge of ‘gross negligence’ is critical,” said Peter Hutton, an oil market analyst at NCB Stockbrokers.

BP and its investment partners, Anadarko and Mitsui, are financially responsible for the clean-up costs, fines and compensation for damages. Transocean has also been deemed a “responsible party” by the US government.

That responsibility could shift and fines could skyrocket if BP — or any of the contractors — are found to be guilty of gross negligence or wilful misconduct.

‘Series of complex events’
The oil company said key failings included a “bad cement job” at the bottom of the well that allowed gas and liquids to flow up the production casing.

Additionally, the results of a negative pressure test were incorrectly accepted by BP and Transocean, while the rig’s blow-out preventer on the seabed failed to automatically seal the well.

“It is evident that a series of complex events, rather than a single mistake or failure, led to the tragedy,” BP’s outgoing chief executive, Tony Hayward, said in a summary of the 200-page report.

Transocean dismissed the report, accusing BP of having designed a “fatally flawed” well and making “cost-saving decisions that increased risk — in some cases, severely”.

“This is a self-serving report that attempts to conceal the critical factor that set the stage for the Macondo incident: BP’s fatally flawed well design,” said the Swiss-based group.

Halliburton said the report contained “substantial omissions and inaccuracies”, while BP was responsible for overseeing and testing complex deepwater operations.

The report was also criticised by environmentalists, lawmakers and lawyers representing those who saw their livelihoods washed away by a black tide.

“This report is not BP’s mea culpa,” said Representative Edward Markey, who chairs the House subcommittee on energy and the environment.

“Of their own eight key findings, they only explicitly take responsibility for half of one. BP is happy to slice up blame, as long as they get the smallest piece.”

It took 87 days to stem the flow of oil into the sea, and hundreds of kilometres of coastline from Texas to Florida were sullied, killing wildlife and devastating tourism-dependent local economies.

Under US law, fines could reach $4 300 per barrel spilled, if negligence is proved. BP could then theoretically face fines of up to $17,6-billion for the 4,1-million barrels that poured into the sea — another 800 000 barrels were siphoned up to ships.

The leaking Macondo well has now been secured but the disaster is being examined in a string of court cases and probes, including a criminal investigation by the US Department of Justice.

BP has already spent $8-billion trying to contain the disaster, an effort it forecast could eventually cost more than $32,2-billion.

The firm’s market value slumped by tens of billions of dollars but its stock has recovered somewhat in recent weeks. Following the report’s publication, BP shares closed up 1,32%. — AFP