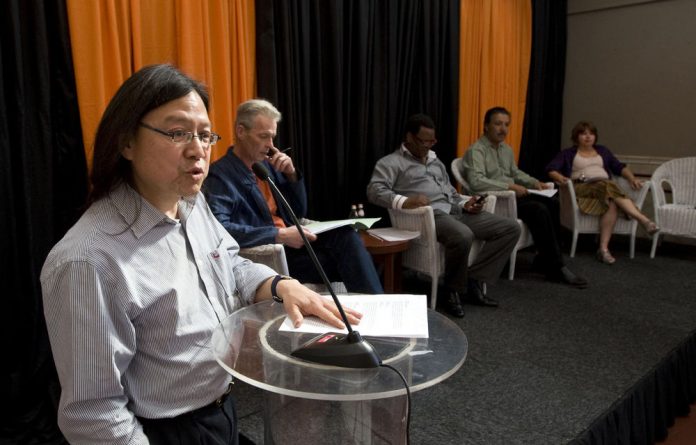 M&G books editor Darryl Accone, who was also co-director of the M&G Johannesburg Literary Festival, gives his take on the event

One’s offspring are always lovely and intelligent, free of blemish and blame. Those of others, obviously, are not.

So it is with circumspection that I approach the brief given me by the M&G Online team: write about the Mail & Guardian Johannesburg Literary Festival, how the event went, the highs and lows as experienced by the M&G‘s books editor.

That I also co-directed the event with Corina van der Spoel of Boekehuis makes me doubly implicated. Let the reader then beware: this is double-jeopardy territory, confessions of a books editor who might speak with forked tongue.

Assuming the role of a festival goer in the audience, I’d have to say that I was delighted by the level of discussion in all the panels.

It was clear that the chairs had prepared assiduously. This I knew beforehand, because Corina and I had to provide the chairs, via publishers and booksellers, with copies of the most recent books by the authors on the panels.

These were not for reading but for re-reading, re-acquaintance and re-thinking. The chairs offered a marvellous mix of perspective and guidance — the latter in the form of the velvet glove or the anarchic bomb (Anthony Egan, for instance, opened the crime in South African fiction and non-fiction session with a question-cum-assertion about the reactionary nature of crime fiction.)

Agile minds, used to working with words, in love with words and their licit and sleight-of-hand applications, fenced with subtlety or cleaved with the force of a broadsword.

The session on postcolonialism, chaired by David Attwell and featuring Imraan Coovadia, Moeletsi Mbeki and Roger Southall, was “unputdownable”.

To the pithy and poignant history of the dispossession and disenfranchisement of the black middle class, offered by Mbeki as his introduction to the topic, Coovadia counterpoised a novelist’s eyeview of the here and now, and of how colonialism imposes itself still on and in the post-colony. Among Southall’s contributions was an illuminating consideration of labour in town and country.

Pathos was the keynote of session five, in which writers responded to Murambi, The Book of Bones, the Senegalese novelist Boris Boubacar Diop’s novel on Rwanda. Music, poetry and short pieces of writing combined to make this 90-minute session a primer on how to write about complex and painful subjects.

So much for the perspective of a fan in the audience. An incomplete picture because I was obliged to move between parallel sessions and was often called out of others to sort out some logistical problems. Donning festival co-director garb, I can point out many of the problems that festivalgoers experienced.

The main venue was less comfortable in the afternoons, when we had to choose between shutting out external noise while raising the temperature inside by closing the doors — or accepting semi-noisiness but a cooler clime by opening them.

That the air conditioner was placed more or less above where the chair and panelists were seated was fortuitous, especially for them, but not ideal for the rest of the room.

Still, this was not a circumstance that prompted mass walk-outs. A few in the audience for session four, “The ABCs of RSA: So where to, education?”, did leave because of the mugginess in the space.

Closeness of another kind was among the festival’s highs for me.

It was the palpable sense of a community forming around words, their freedom and uses, that I found inspiring.

Some of the spirit that had informed and fuelled The Weekly Mail, its book fair and its sister publication across the language divide, Vrye Weekblad, coalesced in the penultimate session, “Being here now — South Africans in 2010”.

That the editor of the M&G, Nic Dawes, and Vrye Weekblad co-founder and editor Max du Preez were on stage probably accounted for much of that, while professor Pitika Ntuli and journalist Kevin Bloom added twists on what it means to be South African — or not.

In all, then, lovely, lively and intelligent, free of blemish and blame: that was the M&G Johannesburg Literary Festival 2010. But then I would say that, wouldn’t I, intoxicated by the late afternoon sun and the shadow of Jo’burg’s mountain, the Egoli gas works, falling slowly over 44 Stanley Avenue, a quintessentially Jo’burg space.