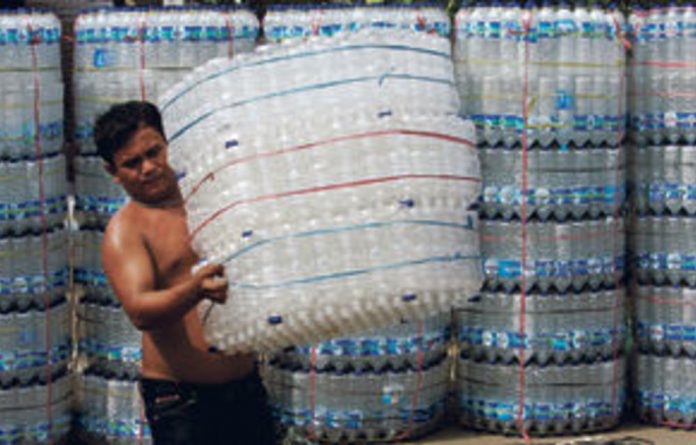 We see them in restaurants, on the streets of Sandton and at the tables of politicians holding press conferences. And they have become a must-have accessory for every gym member.

The age of bottled water has definitely dawned in South Africa — and with it worrying environmental concerns. The figures are staggering.

Market research company BMI Foodpack reports that bottled water is the second-fastest growing beverage in the country. It’s a booming industry worldwide. Globally, between 150- and 200-billion litres of bottled water are drunk every year. Economists estimate that in 2011 the market will have a value of $86.4-billion (R628.7-billion), an increase of 41.8% since 2006.

But globally, there is an intensifying environmental backlash against water in a bottle. As global consumption of bottled water soars, environmental groups such as the World Wide Fund for Nature (WWF) and Greenpeace have warned of the huge environmental footprint of the plastic in which the water is packaged.

Bottled water also requires large amounts of energy to produce and transport. An Australian town in New South Wales even voted to ban bottled water because of environmental concerns.

In 2001 a WWF study, “Bottled water: understanding a social phenomenon”, warned that in many countries, bottled water may be no safer or healthier than tap water and it sold for up to 1 000 times the price. It said the booming market would put severe pressure on recycling plastics and could lead to landfill sites drowning in mountains of plastic bottles.

Instead, resources should be dedicated to cleaning up the Earth’s water, the WWF warned. Most bottled water is packaged in polyethylene terephthalate (PET) bottles. Apart from the concerns about plastic and the afterlife of the bottles, the industry requires more than 200-million barrels of oil to produce, package and distribute the water.

In South Africa consumption translates to 1.2-trillion bottles discarded every year. This is about 28 500ml plastic bottles for each of South Africa’s 42 million citizens.

According to PET Plastic South Africa, South Africans buy billions of refreshments in PET bottles every year and nearly all of them will end up in municipal dumps instead of being recycled. Reusing bottles would be easier if South Africans recycled more.

A recent survey conducted by the Futures Company among 1 000 South Africans revealed that 74% of consumers said that the lack of easy access to recycling facilities held them back from leading a more environmentally conscious lifestyle. Thus, most of the bottles simply end up in the general waste of the local municipality.

Bottled water also hits the pocket of the consumer. While a 500ml bottle of water costs about R6, the same amount of tap water costs less than half a cent. And, its production also uses more water than the consumer actually buys in the shop.

During the filtration of bottled water, up to seven litres of water is wasted for every three litres bottled. Reverse osmosis produces water that is light, soft, easily drinkable and non-filling. It is more expensive and inefficient than filtration: the reported loss is a ratio of 10% to 30% for every litre of processed water produced or 100ml to 300ml for every litre.

Fin24 reports that Coca-Cola owns about 60% of the market share in South Africa. Paul Collingridge, the operations manager of Ceres spring water, said that in spite of the recession, bottled water was holding up well. “I’m just glad that bottled water is seen as a mainstream product, not a luxury, or we might have been in trouble,” he told Fin24.

“PET bottles, a by-product from oil manufacture, are 100% recyclable,” she said. “It is mandatory for all Sanbwa members to recycle plastic and to use recycling-friendly materials in packaging material.” What are the options if you want to wean yourself off the bottle? Is South Africa’s tap water good enough to drink?

Almost all of South Africa’s cities offer good drinking water from the tap, according to the Blue Drop report from the department of water affairs, though one has to be more careful when venturing out to rural areas.

Jo’burg’s drinking water, for example, is on the same standard as the world’s best. Environmentalists recommend carrying a refillable bottle — certified safe to be reused by the South African Bureau of Standards — that can be filled at taps and water fountains as needed.

Instead of ordering bottled water in restaurants, go for tap water. If you like a bit of sparkle in your water, home carbonation system Sodastream is the way to go. Guy Rogers, the marketing manager of Sodastream South Africa said: “By using the system, there are fewer plastic bottles that need to be recycled or thrown away.”

Sodastream’s carbonating bottles are uniquely designed and manufactured to be free of BPA (a plastic compound some believe disrupts hormones), transparent, strong, environmentally friendly and re-usable for three years, he said.

The Aussies who banned the bottle
Residents of New South Wales town Bundanoon outlawed the sale of bottled water last year, after a Sydney-based beverage company wanted to open a water extraction plant in the town. The town is still fighting the company’s proposal in court. The “Bundy on Tap” initiative now sells reusable bottles instead, which Bundanoon citizens can refill at the town’s numerous free public water fountains. They can also pay a small fee to fill them with filtered water kept in the town’s stores.

In the same week the New South Wales state premier also banned all state departments and agencies from buying bottled water because of its huge environmental footprint, joining more than 70 cities in the United States, Canada and the United Kingdom that have banned bottled water in their departments. In South Africa, Cape Town city councillor Stuart Pringle is campaigning to ban bottled water from all council meetings and municipal buildings. He told the Cape Argus that the city spent more than R125 000 on bottled water during the 2008/2009 financial year. This accounted for almost 21 000 bottles of water at an estimated environmental cost of 9 000kg of fossil fuels being depleted and 6 000kg of greenhouse gas being emitted.