The site your mom warned you about 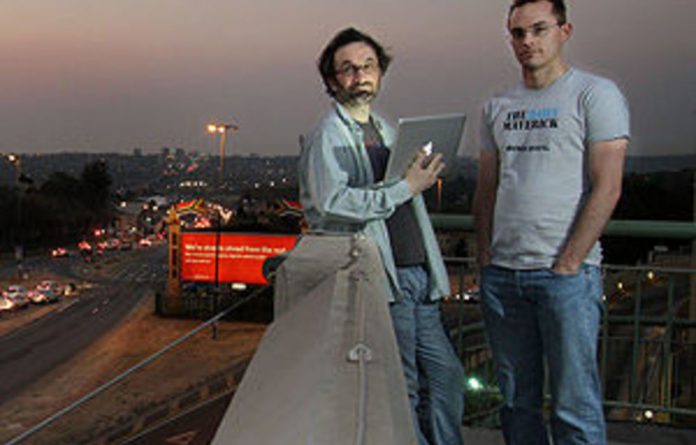 Talk of the media tribunal was at its height and Phillip de Wet and the rest of the local and international press corps took their places among the front rows in the grand chandeliered hall at the South African Institute of International Affairs at Wits University. In a few minutes the American ambassador to South Africa, Donald Gips, would speak from the elevated podium.

De Wet, the deputy editor of The Daily Maverick, plugged his Nokia N85 into his PowerBook, his Canon EOS 550D fastened to a tripod at his side, and dialled up a connection.

“Anybody hash tag this?” he shouted across the room to no one in particular as he set up his mobile reporting station. “I’m tweeting. Is anybody tweeting this?”
We were not. But no matter. De Wet would. And as the ambassador spoke, the bespectacled 32-year-old journalism school dropout, in his signature crumpled T-shirt and faded Levis, told the 3?730 followers of The Daily Maverick what was being said in 140 characters or less, in real time, while simultaneously monitoring the questions readers were sending through. All while taking notes for the piece he would write and post within the next few hours.

After Gips had his say about freedom of speech, De Wet’s lanky arm was the first to shoot up for the Q&A. He summed up the words of one reader: “It’s rich of the US ambassador to talk about South African media freedom when America has acted in such a threatening manner towards WikiLeaks.”

The diplomat diplomatically backed out of the question with a grin, assuring the room that the Americans were all for media freedom, and then took questions from the schoolgirls in uniform in the back row. Afterwards, Gips’s press attaché shot De Wet a look. “Did you have to ask that?”

“What?” asked De Wet in mock innocence. “It was a reader. I just ask the questions.”
Indeed.

Snarky takes
It is in everything. From its headlines and subheads to its tweets and the photos that hook the reader into its world — the attitude of The Daily Maverick just oozes, and it comes out in its astute analyses or its snarky takes on the news items of the day.

Each weekday begins with “First Thing”, a newsletter round-up of what happened internationally overnight and what to look out for that day, emailed by 6.45am to subscribers, about 4?000 and counting. The website, edited by Branko Brkic, who started the now-defunct Maverick and Empire magazines with De Wet, has another 55?000 unique visitors every month.

It’s part Slate, a bit Daily Beast, with a helping of Huffington Post, but it’s all home-grown, serving up local news with fresh angles and international news with insight into why it matters to South Africa.

“First Thing” is becoming a little like Politico correspondent Mike Allen’s “Playbook”, which sets the agenda in Washington DC. In South Africa many of the country’s senior journalists — as well as foreign correspondents — roll out of bed and grab their BlackBerrys to see what’s on for the day.

“What Maverick offers is quick, consistent and intelligent analysis,” says Eyewitness News reporter Stephen Grootes, who is a regular Daily Maverick contributor. “One of the key points is its cynicism. It’s a place where you really do know how the writers feel about what they are writing about.”

Insane
And the pretence of journalistic objectivity goes out the door? “Absolutely,” says Grootes.

But, from the outset, it was completely insane. I, for one, who was an editor for Maverick and Empire until they folded in September 2008, told Brkic it was impossible to run a daily website with a next-to-nothing staff and even pretend to cover the issues of the day. Never mind do it well.

My former colleague from those days, Kevin Bloom, was just as sceptical. “I thought The Daily Maverick was destined for failure when he showed me the template.”

Bloom, who has been a regular contributor to the website since it started up in late 2009, wrote in an email this week. “And he fully deserves all the joy he’s got from proving me wrong. I suppose I should’ve been fired for that, but he’s also a great and loyal friend. Did I mention he’s the best editor I’ve ever worked with?”

Those who have worked with Brkic, who was the launch editor of Brainstorm, IT Web’s trade publication, will tell you: the man has an innate understanding for journalistic beauty. He is passionate about how words and pictures fit together and has the uncanny ability to see straight to the heart of a story and flip it in a way that other local news organisations miss.

“Look,” says Brkic from his cramped office in Hyde Park, “it’s simple. For the past 15 years websites have dumped everything on to their sites and left their readers to decide what was good and what was bad. It’s easy to distribute information. Pick up Sapa, AP and tweet it and you are a publisher. It’s more difficult to create understanding. We want to report it but we also want to tell people why it happened: Is it a good thing? A bad thing? Or what is it? And we want the fourth element — which is to make sure that the reader has a good time reading it.”

White?
But, in spite of its growing fan base, which happens to wield a high level of influence, its audience is highly niche when compared with the big media houses and its demographic, like many of its contributors, is overwhelmingly white.

Enter Sipho Hlongwane. The 22-year-old, self-confessed nerd from “a sleepy town in KwaZulu-Natal” sent Brkic an email in March telling him that, in spite of loving the website, which he found on Twitter while whiling away his days in an admin job at a factory, “how unspeakably white and upper-middle-class” it was.

“On occasion,” he wrote, “I’d really like to read an article that doesn’t make me feel like I should be sitting here in a Pringle shirt and beige trousers, fussing over my side parting, dusting the ash from my pipe off my oaken desk, with a Q7 parked and a portrait of me shaking hands with Raymond Ackerman on my study wall.”

Brkic responded immediately: “Can I buy you a coffee?” (Other than good coffee, a worthwhile adversary is something he can’t resist.) Four months later Hlongwane was on the payroll.

These days, after sending out “First Thing”, you’ll hear De Wet on YFM just after 8am serving up need-to-know news items to its listeners. Last week he told them about the Americans pulling out of Iraq, Paris Hilton’s cocaine arrest in Las Vegas and the offer to the unions.

Hlongwane is evidence that they do and that if you make politics and business interesting the youth will come. “You pick up the paper and it’s dry,” he says. “It’s an extremely unpleasant task. The Daily Maverick is fun to read.”

“Our readers are like good mothers,” says De Wet. “They are loving and supporting, but if we get out of line, they smack the shit out of us.”

But advertisers have been more difficult to convert. Neotel, Altech Autopage Cellular, MWeb and even Discovery have jumped in. But it’s not enough to keep it going forever.

“We aren’t at break-even yet,” says Brkic. “But we’re not too far. Our advertising is pretty valuable and our overheads are nothing.”

Advertising
Which is true. The room it sublets from a recruiting agency is crammed with two trestle tables topped with grey formica slabs that hold their laptops and a few stacks of Daily Maverick T-shirts. It’s the kind of place that could be evacuated overnight, with no trace of its inhabitants save, perhaps, some abandoned Seattle coffee cups and an empty packet of Beacon Sparkles. Aside from rent, its internet connection, cellphones, a handful of contributors and its new hires, Hlongwane and subeditor Theresa Mallinson, there isn’t much more to it.

“Our biggest job is to re-educate advertisers away from banner ads that nobody loves and nobody wants,” says Brkic. “In our research we couldn’t find a single person who liked or clicked on banner ads. The truth is banner ads don’t work. They are classifieds.”

Brkic likens the site’s ad model, which holds just one ad a page that stretches the length of the screen, to a DPS ad in print. And he’s hoping his version of making money off websites — something the global publishing world is grappling with — will work.

Because, for all the Daily Maverick hoopla, it is advertising that will make or break its model and will determine whether the next generation of South African readers will get its news with a Maverick attitude.

The hypocrisies of the EFF and the twists of our prejudice

Uncaptured: How it all began

Zondo commission to hear arguments on admission of electronic data