‘No to apartheid bank’ 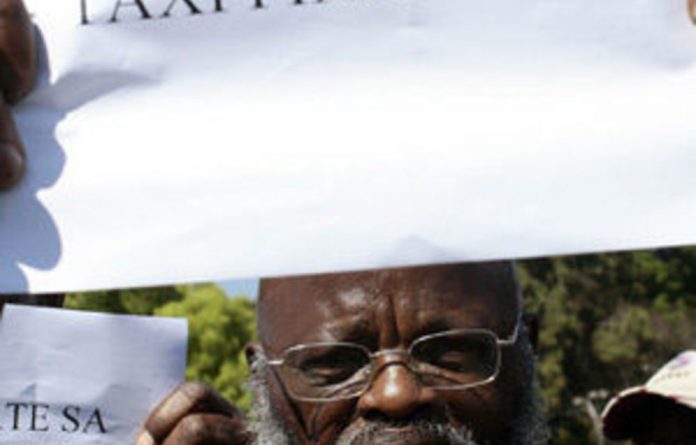 They sang, danced and chanted “Phansi (down) SA Taxi Finance, phansi!” in a protest against the funding institution they accuse of robbing them of their livelihood.

SATF is the major funding institution to the taxi industry, that competes with banks to offer vehicle finance.

National Taxi Alliance chairperson Francis Masitsa claimed the institution randomly repossessed tens of thousands of taxis “after big deposits are paid to them. The taxi operators get nothing back,” he said.

About 200 taxi operators met at Hugh Wyndham Park in Dunkeld West, where they parked their cars, and marched along Jan Smuts Avenue carrying knobkerries, sticks and whips shouting “Amandla, awethu” (power is ours) and “viva NTA, viva”.

Grievances
Police diverted traffic and escorted the protesters to the SATF offices, where they handed over a memorandum of grievances.

According to the document, high interest rates on vehicles purchased by SAT Finance for taxi operators were unaffordable.

Operators further demanded they be consulted over annual insurance premiums demanded by the institution. They lambasted the institution for “arbitrary re-possession of vehicles… which are re-sold in a very short time without [going through] a proper debt review process”.

A taxi operator who wished to remain anonymous said he had paid an R80 000 deposit to the SATF, which then purchased a vehicle for him.

“I paid thousands for monthly deposits and then a few months later they took my vehicle. I got no money back, nothing.”

Masitsa said the protest aimed to “highlight the plight of taxi operators and show that SATF is taking [them] for a ride”.

“We have sat down twice with the institution, but have been disappointed. We will be taking SATF to court.”

Apartheid bank
Placards carried by the protesters read: “Courts are not only for the super rich like you SATF!”, “SA Taxi Finance for: rob and sell” and “No to apartheid bank”.

SATF spokesperson Pete Simms said they would hold discussions with the NTA “in the near future”.

He would not respond to the NTA’s allegations, saying only “these are serious allegations and we need to investigate them further. We’re not going to just comment off the bat.

He said the memorandum “reinforces the willingness” of the SATF to resolve its clients’ account and payment problems.