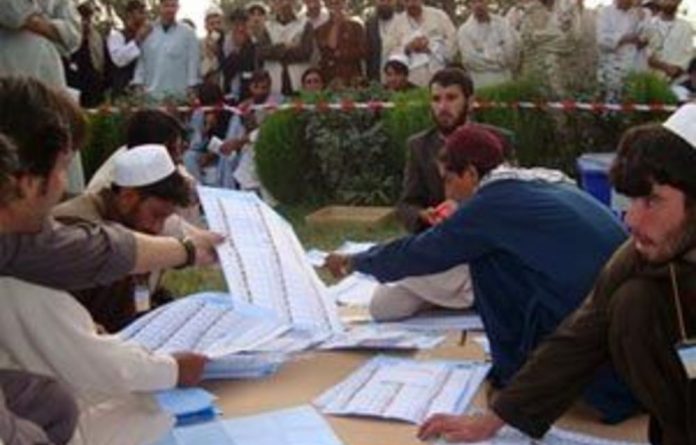 Concerns were growing on Monday about intimidation and fraud in Afghanistan’s parliamentary election as allegations of voting irregularities filtered in from outlying parts of the war-torn country.

Millions of Afghans voted on Saturday in their second parliamentary poll since the 2001 US-led invasion overthrew the Taliban regime, against a backdrop of insurgent threats and attacks.

With counting under way and the first preliminary results expected on Wednesday, the Electoral Complaints Commission (ECC) was compiling reports of irregularities so that final results can be certified by October 31.

Afghanistan’s main election observer body, the Free and Fair Election Foundation of Afghanistan (Fefa), which fielded almost 7 000 observers across the country, said some were prevented from carrying out their duties.

In its first report since the vote, Fefa said fake voter cards were found in 352 polling centres, multiple voting was witnessed at 1 228 sites and underage voting took place in 1 259 places.

Election officials said 5 355 polling centres opened on election day but that about 1 200 remained shut because security was poor.

Some polling centres opened late, and there were widespread allegations of bias by election workers, as well as problems with indelible ink — supposed to guard against a person voting more than once — that could be washed off.

Fefa called on the Independent Election Commission (IEC) to cooperate fully with the ECC into “investigations of fraud and coercion and to resist political pressure to announce the final results early without full verification of legitimate votes”.

President Hamid Karzai, whose own re-election last year was mired in fraud, has cancelled a trip to the UN General Assembly in New York to monitor the outcome of the polls, his spokesperson, Waheed Omer, told reporters.

Afghanistan is one of the most corrupt countries in the world and irregularities had been expected after last year’s presidential poll in which more than a million votes were cancelled as fraudulent.

Western officials have said that with 2 500 candidates vying for 249 seats in the lower house of Parliament, the Wolesi Jirga, thousands of complaints could be expected before the deadline of 72 hours after the close of voting.

The IEC said early figures showed four million people had voted, putting turnout at 40% of those able to vote — where polling stations opened.

In last year’s presidential election, turnout was estimated at 38,8%, according to IEC figures. The ECC said it invalidated more than 1,2-million votes, mainly on the basis of fraud and many in favour of Karzai.

Nato said at least 22 people were killed in polling-day violence. The IEC said bodies of three election workers were found Sunday in Balkh, one of the provinces in the north where violence has increased over the last year.

Insurgents bombed polling stations and fired rockets in several cities. The governor of Kandahar, the Taliban’s southern stronghold, said he escaped a bomb attack on his convoy, and officials said several more attacks were foiled.

The Taliban released a statement saying it had disrupted the poll enough to cause it to “fail”. — AFP

As Washington overpromises and underdelivers, regional powers are seeking solutions on their own — both through violence and diplomacy
Read more
World

Jalaluddin Haqqani became a CIA asset and received a personal visit from US congressman Charlie Wilson, who helped secure arms for the mujahideen
Read more
Environment

Farmers in war-torn Afghanistan hit by worst drought in decades

Activist Elin Ersson disobeyed authorities to delay the deportation of an Afghan asylum seeker, saying it is not right “to send people to hell”
Read more
World

'The roses are much better... I make good money from roses. They are resistant and don't require as much expense or work'
Read more
Advertising