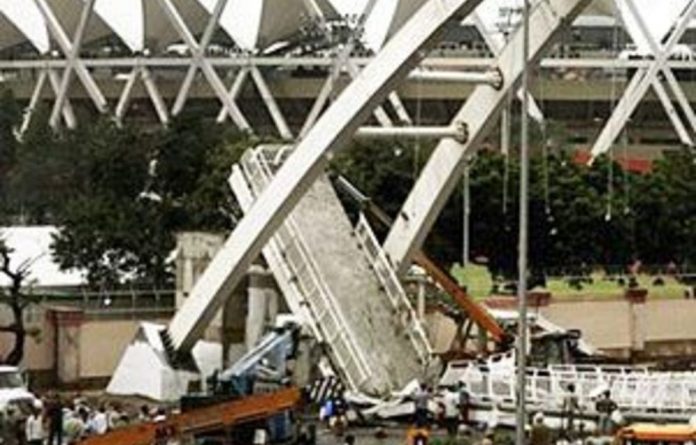 The Delhi Commonwealth Games were plunged into crisis on Tuesday 12 days from the start after the athletes’ village was described as “uninhabitable” and a footbridge collapsed at the main stadium.

Adding to the sense of chaos that has enveloped an event India hoped would project its new economic power on the international stage, a leading Australian athlete pulled out of the competition because of security fears.

Organisers scrambled to contain the damage, fearful that a pull-out by a major team could wreck the October 3 to 14 multi-sport showcase that has long been dogged by delays, corruption allegations and anxiety about safety.

Mike Hooper, chief executive of the Commonwealth Games Federation, led stinging criticism about the athletes’ residential towers, which will embarrass the government that has admitted that the country’s prestige is on the line.

There was also “excrement in places it shouldn’t be”, referring to problems thought to be the result of thousands of labourers using the toilets in the “certainly uninhabitable” residential complex.

“The reality is that if the village is not ready and athletes can’t come, the implications are that it’s not going to happen,” New Zealand chef de mission Dave Currie told New Zealand commercial radio. “It’s pretty grim really and certainly disappointing when you consider the amount of time they had to prepare.”

Thousands of workers have been labouring around the clock to finish sports facilities and the athletes’ village, as well as to clear up piles of building rubble that still litter large parts of the capital.

At the main Jawaharlal Nehru Stadium, which will host the opening ceremony and athletics, an under-construction footbridge collapsed on Tuesday, injuring 23 labourers, five seriously, police said.

The approximately 100m bridge, built to link the car park to the stadium, fell down as workers were paving it, a labourer at the scene told Agence France-Presse (AFP).

“I saw several people with bleeding arms and injuries on their bodies being taken away,” construction worker Zakir Hussein told AFP.

Building work for the Games, expected to draw 7 000 athletes and officials from countries that were mostly in the former British empire, has been severely delayed and doubts have been raised before about the quality of the construction.

India’s chief anti-corruption body found a host of problems with construction work in a July investigation, including dubious contracts and the use of poor-quality materials.

The other main worry about the Games has been the risk of attacks by militant groups that target India, with anxiety raised at the weekend after a gun assault outside Delhi’s main mosque that left two Taiwanese men injured.

“Dani is extremely distressed about it all,” Samuels’s manager, Hayden Knowles, told the agency.

“The situation in Delhi has been bothering her for some time … But the events over the weekend made it real,” he said.

Samuels (22) won the gold medal in discus at the 2009 World Championships in Germany.

Other star athletes such as Jamaican sprinter Usain Bolt have already decided not to come.

The president of the Commonwealth Games Federation, Michael Fennell, opened the criticism on Tuesday with a damning statement that said several nations had been “shocked” by the “seriously compromised” Games village.

Lalit Bhanot, organising committee secretary general and official spokesperson for the Games, stressed that the village was “probably one of the best ever”.