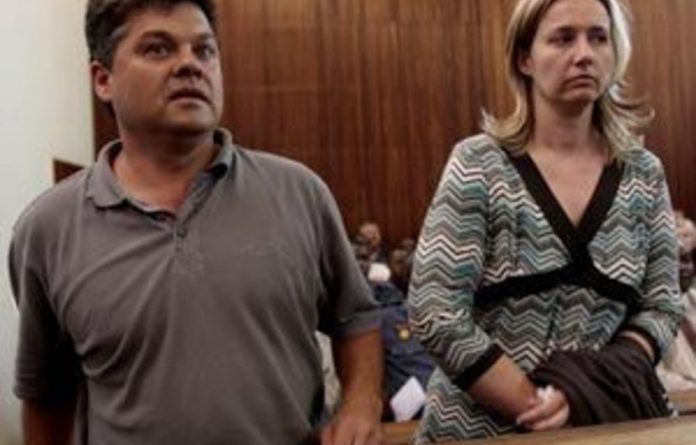 Limpopo game farmers are outraged that people they trusted, including vets, have been implicated in alleged rhino poaching in the province, although some farmers were instrumental in their arrest.

This week police smashed what they believe is a major rhino-poaching ring, in which well-organised South African hunting outfits might have been supplying Vietnamese and Chinese syndicates with rhino horn.

On Monday Dawie Groenewald and his wife, Sariette Groenewald, of Out of Africa Adventurous Safaris, and a contracted hunter, Tielman Erasmus, were arrested at a farm near Louis Trichardt. Also among those held in raids by the South African Police Service were two vets from the Modimolle area, Karel Toet and Manie du Plessis, and Toet’s wife, Mariza.

Dawie Groenewald was released on R1-million bail and Sariette Groenewald on bail of R100 000.

The arrests follow the netting earlier this year of George Fletcher of Sandhurst Safaris and Gerhardus Saaiman of Saaiman Aviation, who will stand trial in October on rhino-poaching charges.

The National Prosecuting Authority said in May that the Asset Forfeiture Unit had confiscated a small helicopter and an Aerostar plane belonging to Saaiman as part of a restraint order for R45-million.

In the Limpopo bust police reportedly traced a helicopter seen at a number of the poaching sites back to Sariette Groenewald. According to Beeld, the chopper belonged to Valinor Trading 142, of which she is a director.

Renita Prinsloo, secretary of the Makhado district farmers’ union, said that a farmer in the area had followed a Robinson R44 helicopter to Marken and alerted the police. She said the farmers had become informed aerial spotters. “We feel like air traffic controllers these days,” she said. “Anything in the sky gets queried.”

Prinsloo, who coordinates intelligence from the farmers, said the police had been very sharp in their operations. “We’ve established quite an efficient intelligence network to spot potential poachers and close off roads when necessary, working with the police,” she said.

Five rhinos were killed in the Makhado district in the past month, and a number of killings were prevented.

“Farmers are gatvol [fed up]; they’re very enthusiastic about catching the perpetrators,” she said, adding that the community is shocked by the involvement of the vets and their alleged role as intelligence-gatherers. Toet and Du Plessis are well-known specialists with a good reputation in the area, she said.

“Farmers are livid. They trusted these people to come on to their farms and nurse their animals. Meanwhile, they were gathering information. Because of their work they knew how many animals there are on each game farm and where the bomas are. They knew which farmers are businessmen and would be away from their farms. And they knew the farms’ borders.”

No surprise
But the arrest of individuals linked to Out of Africa does not seem to have surprised the Limpopo farming community. Prinsloo said one of the farmers in the area, who knew the Groenewalds, grew suspicious when the former policeman started displaying new-found wealth.

Following an investigation, Out of Africa was expelled from Zimbabwe by nature conservation authorities for apparent illegal activities in 2005. Groenewald was also suspended from the South African Professional Hunters’ Association in 2006 for unethical behaviour and in April this year was arrested in the United States when he tried to smuggle a leopard skin into the country. Beeld reported that he pleaded guilty and was sentenced to a fine of $30 000.

Johnny Rodrigues, the chairperson of civilian group Zimbabwe Conservation Task Force, said this week that he believed Groenewald was part of the “Musina mafia” that ran illegal hunts in Zimbabwe.

The M&G reported in 2003 that South African hunters had moved into Zimbabwe to hunt on farms seized by “war vets” without the necessary permits. Groenewald said at the time that all his papers were in order but he was expelled soon afterwards.

Both Groenewald and his wife’s phones were switched off on Wednesday and they could not be reached for comment. Erasmus did not respond to a message.

Meanwhile, the arrest of three press photographers and the manhandling of one of them yesterday by police at the court appearance of the suspected poachers was condemned by the South African National Editors’ Forum. The three were detained for 45 minutes at the Musina police station and prevented from taking pictures of the accused. The men were later released after interventions by a prosecutor and acting police Hawks spokesperson Colonel Vishnu Naidoo.