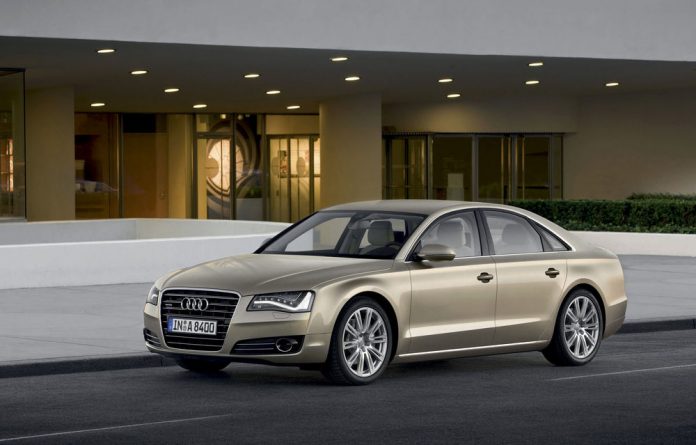 The previous Audi A8 was a bonafide movie star and lived life at the end of a thousand red carpets. Now Ray Leathern has spent a few days finding out if the new A8 still cuts it.

I worked in films for years and I can see exactly why the art school drop-outs who work on film sets loved the Audi A8/S8. Think getaway car in Ronin, all the Transporter movies or any film where four heavies need a speedy, comfortable retreat. It makes for a great film: large German car and small European streets. So the famous Ronin chase may have actually involved an M5 and a Peugeot, which kept up with the Beemer remarkably well now that I think about it, and the A8 in the Transporter films spent most of its time doing ridiculously unbelievable upside-down flips through shipyards, but the reasoning for the A8 becoming the perfect automotive, movie menace still remains.

The Mercedes S-Class is great but with a fridge for two champagne glasses and a bottle of bubbly in the back, forget it. The BMW 7-Series is great for transporting MPs to court and back during corruption trials but it’s a little dimwitted for Hollywood. And I can’t help imagine the new Jaguar XJ isn’t good for anything besides 007, in the back, trying to get cozy with the new intern from the home office. So that leaves us with the Audi.

And my new, 4.2-litre V8 test vehicle, in black, should’ve been the ultimate expression of menace. But aside from the LED headlamps that look like they were drawn in mid-sneeze, it looks benign and saggy at both ends. I understand unassuming is what you want when you’re fleeing Interpol, but this is too much. Gone are the punchy jaw line and trapezoidal muscles, and what’s left looks like an A8 that’s forgotten where its gym card is. I can see what they’ve tried to do. In our economically compromised, eco conscious, modern world, Audi have dumbed it down, tried to make it less blue blood, more like an A4. And they’ve succeeded.

I’m happy to report that on the inside however, it’s still fantastic. Luxurious, sharp and modern like flying business class on an Airbus A380. Everything has a dash of the sporting to it. The red accents on the dials, everything eggs you on that little bit more. Polished wood runs the length of the dash and brushed aluminium and disco glitter ball lighting can be found everywhere else. The seats are figure-hugging and can be adjusted in 10 different ways. This means you’re perfectly positioned when you want to drive vigorously the way Jason Statham does.

The thin film transistor screen between the two dials can act as a night vision camera and shows easily comprehensible information directly in front of you at the touch of a button on the wheel. A second screen rises from the centre fascia when you command the ‘MMI’, multi-media interface system and is easy and sumptuous to navigate. The style of the interface mimics that of BMW’s I-drive, but the elegance of operation, I believe, is superior in the Audi.

You have a choice of four settings through Audi’s Drive Select system: dynamic, auto, comfort or individual — the last of which you can tailor to your own personal preference once you’ve unearthed the flaws of each default setting of which there are several. Any mode on the air suspension is choppy. The ride is so irritating and hopeless that on the highway, where frankly a big limousine should reign supreme, I was convinced I had a slow puncture. I know Audis are meant to be sporty, but its two German competitors ride like magic carpets in comparison. The drive-train is also hopeless at slow speeds.

However, it’s this Neolithic feel at slow speeds that gives you some idea about what the A8 can do. It’s not meant to be driven slowly. Flick a few cogs down on the paddle shifters, bury your right foot into the carpet and the big bruiser starts to howl back at you. I’m convinced the Audi 4.2-litre V8 is the wrong power plant for a stately limousine; it has no low-down torque and only reaching into the upper echelons of the revs makes it come on song. It’s an engine that doesn’t swell you along; it shouts and climbs up your spine. But the A8 does make sense at 5000rpm caning around a mountain road, sharp, poised and planted, I assure you. Dynamically it’s very good – it’s a big car and requires a patient touch to get the most from it, but the security of all-wheel drive keeps you dialed in. You couldn’t drive many big limos as rapidly this much of the time.

When you begin to think of the Audi A8 not as a stately limousine, but as a hard charging, uber-endowed, four-door saloon, then it starts to makes sense. It’s for drivers, and while it’s trounced by Jaguar, Mercedes and BMW as a mode of commodious, comfortable transport, it’s more understated than ever and just as vicious as before. Stunt men in the movies, belting through downtown Nice on two wheels will love it.

And people in the real world? Going to economic summits in Brussels? Well, the BMW and Mercedes hierarchy will probably remain intact. But that’s fine by me— maybe not on the outside, but as a drive it’s still got star quality.