Diversity of voice would herald a true new age 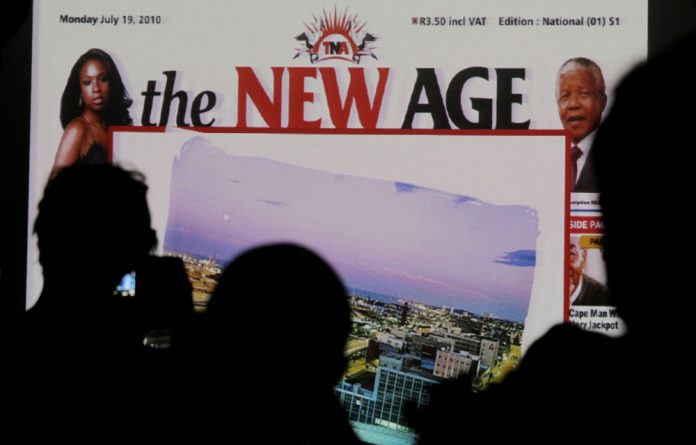 About 235 000 copies of a special “teaser” edition of the long-awaited newspaper were distributed around the country ahead of its real launch, planned for October 20.

Broadsheet in format, serious in tone and look, the paper showed some of the rough edges of a launch edition but carried a respectable amount of advertising — much of it from the government.

The first edition tried hard to meet pre-publication criticism that it would be nothing more than an ANC rag. Its founding editorial declared its intention to be “a new voice for a new South Africa”, charting a path of pride in the “new” South Africa and its achievements without abandoning the capacity to criticise when necessary.

The rest of the paper demonstrated that approach. The news pages were strongly dominated by the ANC’s NGC, but that was the case for the rest of the media last week. Columns on the opinion pages took various kinds of independent view.

It’s a reasonable position, not far removed from the way most news media would articulate their attitude, and recognises that readers seldom flock to read propaganda.

Most interesting was the paper’s deliberate attempt to ensure it carried news from every province. Each one was given dedicated, labelled space, though a report on factional ANC politics in North West joined a review of a photo exhibition of Orania to make up the Northern Cape page.

The arrival of The New Age highlights an important issue in the current debate about the media. So far, the emphasis has been on the system of self-regulation, the implications for media freedom of the planned media appeals tribunal and on criticism of poor ethics in journalism.

But there is an element of the ANC’s criticism that deserves more attention: the view that there is too little diversity of voice in existing press.

Undoubtedly, the party has a point when it argues that the mainstream media are dominated by urban, middle-class concerns. It is true that the media’s business model drives them to focus on those audiences with the money to buy advertisers’ products.

The point has been echoed by Professor Jane Duncan, of Rhodes University, who points to the absence of reporting of political activities in the smaller towns of South Africa. The media simply reflects the deep divisions in society as a whole.

The one institution that should bridge the gaps in our media landscape is the SABC. But it also draws most of its income from advertising, and its apparently chronic inability to stabilise itself has tragically undermined the public broadcaster’s ability to play its proper role.

Some efforts have been made through the activities of the Media Development and Diversity Agency to extend access to media. Community radio now reaches millions of people, though many stations struggle to stay afloat and the quality of programming is often uncertain.

The much-maligned tabloid newspapers have also been successful at drawing new audiences. But they exist almost in a world apart: their racy headlines are quickly dismissed by the more “serious” media, and yet they often reflect life as it is lived by most South Africans. Regular necklacings represent the brutish face of street justice in some areas of Jo’burg and probably elsewhere — we might know this if we’d been watching tabloid reporting.

News media will continue to target particular audiences and the middle classes will continue to get a disproportionate share. But more should certainly be done to make sure that all communities have access to quality information and that the mainstream media reflect the full reality of the country.

The arrival of The New Age adds to the range of voices available. It’s not clear how successful it will be in drawing readers in poor communities: the paper remains a commercial enterprise and its tone and look seems to be more directed at challenging for space in the crowded middle-class market. Giving dedicated space to each province may prove difficult to sustain editorially, but it is an interesting gesture of inclusiveness.

I continue to feel that much of the ANC’s thinking about the media is wrong — a statutory media appeals tribunal will do nothing for journalistic standards and represents unjustifiable interference in media freedom, in spite of protestations to the contrary. But the discussion about diversity of voice is an important one and I hope The New Age succeeds.

The Mail & Guardian’s ombud provides an independent view of the paper’s journalism. If you have any complaints, you can contact Franz Krüger at [email protected] or phone the paper on 011 250 7300 and leave a message. Krüger is also a member of the South African Press Appeals Panel.