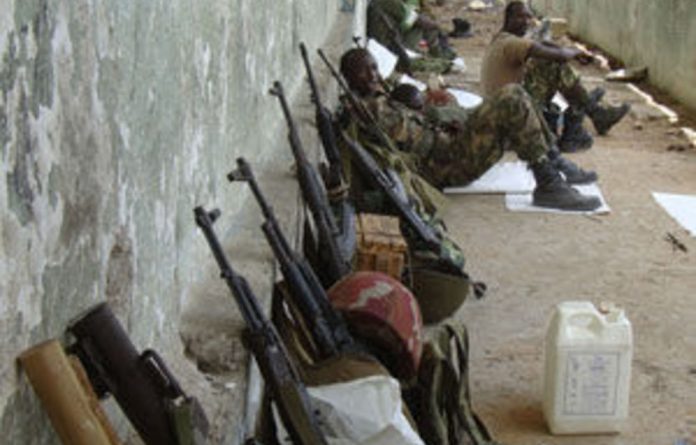 A lull during fierce fighting gave Hassan Mohamud Mohamed time to hire a boy to wash the blood from his vehicle.

The break didn’t last long. Mohamed is an ambulance driver in a city filled with war, and as the boy scrubbed the hatchback of the green-and-yellow checkered minivan, a call for help came in.

“Stop!” Mohamed yelled at the boy, who hadn’t quite finished cleaning. Mohamed jumped in the driver’s seat. “I’ll be back.”

Ambulance drivers risk their lives to try to save people hit by the mortar fire, artillery shells and random gunfire that have been ricocheting around this crumbling seaside city for almost 20 years. In 2009, two drivers were killed — one when a mortar round landed on an ambulance and a second when another ambulance was hit by tank fire.

The city lurches between quiet periods, when shoppers fill markets, to heavy warfare where no place is entirely safe. Since Saturday, 23 people have been killed and almost 90 wounded, Mohamed’s ambulance service said.

Mogadishu’s Lifeline Africa Ambulance Service has seven vehicles and 11 staffers who are each paid $100 a month. The ambulances are austere, carrying only stretchers, bandages and blood-clotting medicine. The staff is made up of drivers and their assistants, none with any formal medical training. On a recent Saturday — not a particularly busy day by Mogadishu standards — an Associated Press writer and photographer accompanied Mohamed on his run.

As the ambulance approached a government checkpoint, the lone soldier on guard pointed the barrel of his gun at the vehicle.

Twenty minutes later, Mohamed pulled up to a woman screaming outside a five-room bungalow made of cheap bricks.

“My son is dead!” she cried out as she held her hands on her head. She berated Mohamed, saying he arrived too late.

A mortar shell had landed on the house and the woman’s 10-year-old son was killed. No one else was hurt, another woman standing on the road said. Mohamed drove away.

Chaos and panic
Sometimes drivers like Mohamed head into scenes of sheer chaos and panic. They try to pick up only the wounded who can be saved, but crowds of relatives and neighbors often shove dead bodies into the ambulance alongside the living. Sometimes six people are crammed into a space meant for only one or two.

“People are in hysterical situations,” ambulance driver Mohamed Hussein said. “So everyone wants to save his loved one before others. Sometimes it is hard to distinguish the dead from the wounded.”

The service began two years ago and is funded by Nation Link — a Somali telecommunications company — as well as donations from local and expatriate Somalis. Before then, many of Mogadishu’s war victims died where they fell or while being carried to the hospital, often bleeding to death.

The difficulty of the job has been compounded by rumors that insurgents planned to use ambulances to attack government and African Union bases. In addition, a militant group donated two ambulances, a gift that raised government suspicions.

“The distrust of our service in the government-controlled part of the capital is high,” said Ali Muse, director of the ambulance service. When ambulance drivers are stopped at checkpoints, “the delay makes us lose people,” Muse said.

A government official did not return calls for comment, but a spokesperson for the African Union troops admitted the AU force is sometimes suspicious of the ambulances. “They [the militants] can use anything, including ambulances, donkeys, wheelbarrows, trucks and fuel tankers, to carry out their attacks,” said Major Barigye Bahoku, the AU spokesperson.

Not long after Mohamed drove away from the woman who criticised him for being late, another emergency call came in to his ambulance. He was to drive to the Bakara market, in a neighbourhood controlled by al-Shabaab, a group that pledges fealty to al-Qaeda and controls all but a few blocks of Mogadishu. It wants to impose harsh Islamic rule in Somalia, which hasn’t had a fully functioning government since 1991.

The al-Shabaab-controlled district is too dangerous for journalists, so Mohamed dropped off the AP reporter and photographer, who waited under a concrete wall while shelling boomed in the background.

Caught in the crossfire
A half-hour later, Mohamed was back, having been delayed again by government and militant checkpoints.

In the back of the ambulance lay a woman with blood pouring out of her clothes. She groaned in pain. A teenage boy who was with her said she was caught in the crossfire at the market while buying food for her children.

During heavy fighting, Muse and his team sometimes work 24 hours or more, to the point of exhaustion. He wishes for more training for his staff and better facilities and equipment.

“But believe me, we still like the feeling of being able to help people when they need us,” Muse said.

When night falls, saving lives becomes almost impossible. A shoot-to-kill mentality takes over after dusk, with government troops and militants both opening fire on sight.

Driver Abdullahi Ahmed said he has a good job “but it also traumatises me”.

“We wash the blood off our hands and get back in the ambulance. Siren screaming, lights flashing, we huddle on the floor of the ambulance, we pack it with people with different injuries, some of them very critical,” he said.

Violence between al-Shabaab militants and pro-government forces spiked in September. Elmen, a human rights organisation, says 185 people were killed last month. More would have died if not for the ambulance service.

Kenya said it invaded Somalia to protect its citizens, but the attack in Nairobi this week shows this has failed
Read more
Advertising
Continue to the category
Education