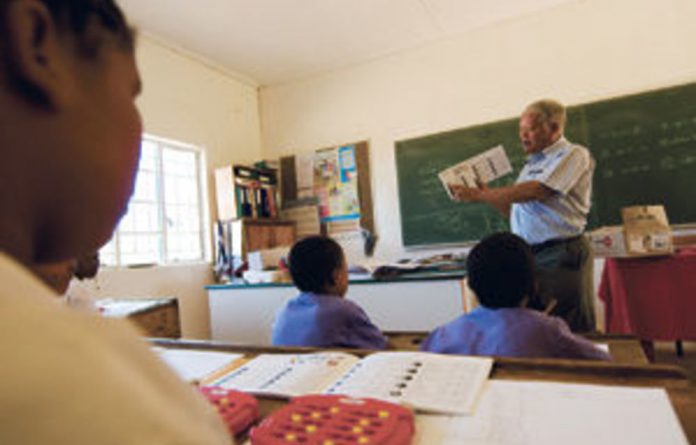 World Teachers’ Day, celebrated on October 5, is an annual event that gives us the opportunity to honour our corps of teachers for the important role they play in providing education. Delivering quality education is the ideal, and the theme of this year’s World Teachers’ Day, “Recovery Begins with Teachers”, speaks to the truth that our own education system has been in crisis for some time. There is little in the way of quality education for at least 80% of our learners.

Responding to a written parliamentary question recently asking why schools are dysfunctional, the basic education minister gave various reasons based on reports from provincial departments.

This answer did not mention any of the four major reasons that, in my view, explain the dismal performance of our school system:

I have often said we have to develop the curriculum according to scientific principles and methods. About two months ago I thought

my pleas had been heard during a workshop for members of Parliament’s education portfolio committee and the department, in which a senior departmental official spoke about an envisaged “institute for curriculum development”.

But nothing has come from it. The same unscientific approach adopted in the past is being adopted now.

Mistakes being repeated
The curriculum revision announced in Parliament last year was completed in a trial-and-error manner by temporary task teams in a suspiciously record time. Completely unrealistic deadlines for public comment have been set, with implementation of the new curriculum due to begin in January next year.

In other words, the mistakes of the past are being repeated.

The new curriculum is being referred to as “Schooling 2025”. A new generation of learners will have exactly 15 years as guinea pigs to “test” its implementation. This is time enough to create a second lost generation.

David Macfarlane and Kamogelo Seekoei reported in the Mail & Guardian recently that education experts have described the revision process as “deeply flawed” and “not managed nor quality controlled”. Macfarlane also wrote: “In the process [of implementing a new curriculum] huge political pressure builds up as everyone demands to see visible gain from palpable pain”.

Second, anyone who knows what international research says about language and education knows that the single factor guaranteeing quality teaching is mother-tongue instruction. Yet our schools still fall far short in this regard and we are not yet training mother-tongue teachers either.

Third, the bloated, clumsy and unaffordable top structure of the national department of basic education results in fragmented areas of responsibility on the one hand and hobbles policy formulation and leadership on the other. This means that services cannot be delivered quickly and efficiently.

And, finally, the recent teachers’ strike — following a five-week football holiday — meant that many of our learners were forced to endure even more idleness.

Some learners who tried to continue on their own steam were chased out of their classrooms and prelim exams were postponed, disrupted and in some cases even abandoned.

Many Sadtu members were guilty of illegal actions, such as vandalism and ignoring a court interdict. As the reality of the “no work, no pay” principle begins to sink in among members, Sadtu, in alliance with the Congress of South African Students, is demanding to be paid for extra teaching.

Strangehold on education
Sadtu is notorious for forcing its members to give up teaching time to attend meetings and workshops, or to participate in marches and demonstrations.

The union has a culture of interfering in teacher appointments, undermining the authority of school principals and intimidating communities (and in some cases even pupils) to promote its selfish purposes. Sadtu members occupy top education posts nationally and in the various provincial departments of education.

In effect, the union has a stranglehold on our education system.

What now? The real reasons our schools are dysfunctional are being swept under the carpet, so we need to think about who has the responsibility for damage control.

In the Sunday Independent last month, Brutus Malada was right to say: “Our education system requires a rescue plan and this should be the preoccupation of the ministries of education.”

Both education ministries have an obligation. Basic Education Minister Angie Motshekga and her department are responsible for our school system, but her counterpart in higher education and training, Blade Nzimande, cannot look the other way.

Next year universities will receive some of this year’s grade 12 learners. The year marks of these learners, which must be taken into account during the selection process, will in many instances be suspect because many schools could not complete the syllabus.

Prelim exams were disrupted or abandoned for some and preparations for the final exams have taken place in a tense and uncertain atmosphere, marked by many pupils’ disappointment in the integrity and dedication of their teachers. The M&G referred to the “massive damage to learners” and “very angry young people”.

During a recent meeting with Motshekga and her department’s top officials on the effects of the strike, members of the portfolio committee were assured that recovery programmes would not end in December and all learners would be treated as victims of this year’s strike.

This will include those who register as first-year university students next year. The trauma of the strike, and the resulting academic disadvantage suffered by many, will place these institutions under great pressure.

These, too, are the grade 12s who obtained distressingly poor average marks during national literacy and numeracy tests in their lower grades.

The question is whether Nzimande is aware of the nature and extent of the problem that our universities will face next year and whether he realises that the first-year students of 2011 will place great pressure on these institutions because of their need for bridging help and support.

Our education authorities dare not leave these students in the lurch.

Junita Kloppers-Lourens, MP, is the Democratic Alliance’s education spokesperson. A version of this article appeared in Rapport

The pandemic has underlined the need for effective research, teaching and learning through virtual platforms regardless of travel restrictions
Read more
Coronavirus

Strict Covid protocols are in place for the exams, with special provision made for those who test positive
Read more
Education

The first investigation into the maths paper two leak is expected to be concluded by the end of November.
Read more
Education

A message to the Class of 2020: You are equal to this challenge

Given Covid-19, the ensuing lockdown, and the number of school days lost, the odds have been stacked against this year’s matrics. But our country’s children have previously shown us just how resilient they are
Read more
Advertising