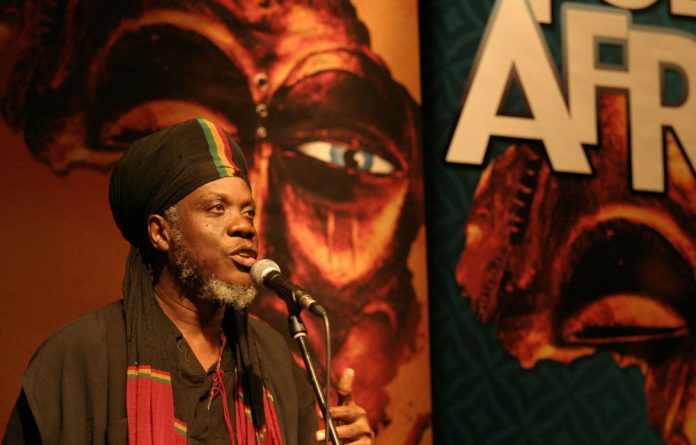 The University of KwaZulu-Natal-based Centre for Creative Arts, which hosts annual dance, film, poetry and writers festivals, is increasingly becoming a cultural refuge from the encroaching philistinism and political prescription that is permeating Durban.

Rorvik, who recently returned from a Southern African tour, which included Zimbabwe and Malawi with some Poetry Africa participants, noted disturbing events in both those countries, including the former’s requirement that all artists be registered with the Zimbabwe Censorship Board and the latter’s banning of a local film, Lydia, that explored sexual identity.

Despite geographical proximity, South Africa appears remote from Zimbabwe, allowing a democratic space for degrees of dissent: we shout, we protest and pick at the sociopolitical scabs whenever we can.

Which is why Poetry Africa’s opening night — at which poets sampled one or two pieces of the main event — was a tad disappointing at moments.

Some African poets subscribed to a spiritual reflection of the continent, engaging in hackneyed notions of noble traditions and customs.

Other poets spouted the sort of confessional poetry that made it difficult not to suppress the words of poet Christopher Merrill who, in an interview with Iranian poet Farideh Hassanzadeh, said that: “The problem with our confessional poetry is that it listens only to itself, when what is most needed is the ability to hear ‘all sounds as they are tuned to their uses’.” (The latter quote coming from Walt Whitman’s Song of Myself.)

But there was some exemplary work expressed by emerging and established poets.

Twenty-nine-year-old Ronelda Kamfer’s astute observations of the everyday — and the underlying psychosis bred by marginalisation — in her Cape Flats community mark her as a pertinent young voice in the Afrikaans literary landscape and in the broader society.

Durban poet Mari Pete’s flirty and humorous Durban Taxi was an amalgamation of the monikers local taxi drivers give their vehicles, which the poet had scribbled down while stuck in traffic and “jumbled it all up until it told me it was a poem”. A delicious success.

Pete delivered more of her repertoire with poems from her bilingual collections Begin and Amytis, including halfronde, a poem of longing, exile and confusion written in 19 93 in England on the night of the murder of SACP leader Chris Hani.

Legendary Jamaican dub-poet Mutabaruka did what appears to be a mandatory recitation of Dis Poem on opening night — to storming applause.

He appeared dumbstruck when the Mail & Guardian asked him afterwards if he ever tired of reading the poem. An inconceivable idea, apparently.

On his role as a poet Mutabaruka was frank about the limited power of poetry to change the world, but added that it remained “a force of awakening” to social and political problems facing individuals and communities.

The highlights on the night were those poets who engaged social injustice and the political with intimacy.

Palestinian Ghassan Zaqtan’s Pillow was a mesmerisingly painful rumination on the effects of the Palestine-Israel conflict on mothers and sons who tire of war, but find no escape from it.

Uruguayan Jorge Palma’s attention to precision and detail likewise made the ignoble invasion of Iraq palpable.

Zaqtan, who co-published the Palestinian Liberation Movement journal, Bayadir, and was editor of the literature section of al-Hurriya, is the first poet to fill what is to be an annual slot called Letters to Dennis, in memory of poet and activist Dennis Brutus who died last year.

According to the festival organisers it will feature a poet of “high excellence who reflects Dennis’s passion for human rights and integrity”.

During the Letters to Dennis section of the programme, Zaqtan chose to focus on exile — inspired by both Brutus’s Letters to Martha and his own experience of exile.

Born in Beit Jala near Bethlehem and currently living in the West Bank city of Ramallah, Zaqtan still considers himself to be living in exile and noted: “It is the question that has always troubled poets: Which is more beautiful, the way home or home itself?”

Black Horses, The Sleeper’s Song and A Picture of the House at Beit Jala are three immaculate pieces exploring themes of memory, loss, exile and war in an all too short set by Zaqtan. His poetry is moving — on a seismic level.

She spoke in a demure sexual manner and in language that seemingly brought into view stereotypes of submissive womanhood, but always ended with a twist that felt like a brutal kick to patriarchy’s testicles.

She explored the caste system in India, love and gender violence.

The first two nights of Poetry Africa were a success in the plurality of voices it showcased and its diverse reflections on the human condition — something to be savoured. Always.

Celebrated author and political activist Achmat Dangor died on Sunday at the age of  71. Here, in a 1990 interview published in Staffrider, he speaks to Andries Walter Oliphant about his work and aspects of South African literature and culture
Read more
Friday