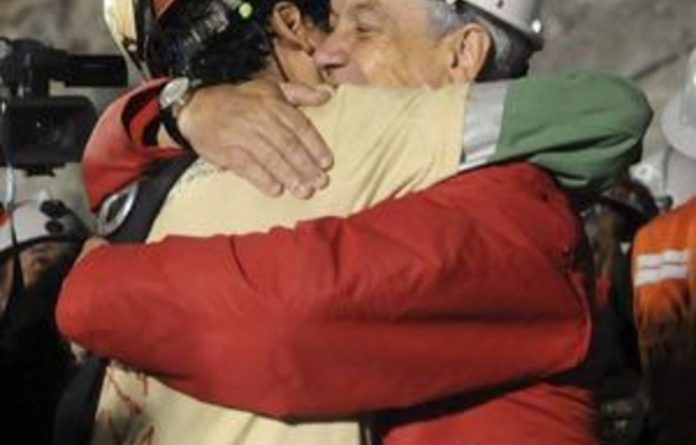 Pumping their fists, or falling to their knees in prayer, more than a third of the 33 Chile miners trapped below ground for weeks savoured their first tastes of freedom on Wednesday, rising from the depths to a hero’s welcome.

By shortly after dawn, rescue workers had lifted 12 men to safety from the underground cavern, which so nearly became their final resting place, in an historic and complex operation carried off like clockwork, without a hitch.

Cheers erupted and tears flowed as each of the men stepped from the specially designed rescue capsule, dubbed Phoenix, to be embraced by their loved ones, hugging their rescuers as well as Chilean President Sebastián Piñera.

The methodical rescue, which should see all the men freed by early on Thursday, kicked off at about midnight when 31-year-old Florencio Avalos was the first to be hauled to the surface, rising up through 622m of rock.

Joyous celebrations erupted among hundreds of waiting relatives as after a 10-week tense ordeal, which began with the mine cave-in on August 5, Avalos became the first to step from the capsule.

He hugged his seven-year-old son, his wife Monica, then Piñera and other officials before being taken to hospital for medical tests.

A second miner, Mario Sepulveda (40) soon followed, admitting: “I have been with God and with the devil. I fought between the two. I seized the hand of God, it was the best hand. I always knew God would get us out of there.”

Sepulveda delighted the crowds by producing rocks as ironic gifts from a sack before leading the congregation of officials, relatives and rescuers in an impromptu, celebratory chant.

Despite fears for the health of some of the 33 men, they all appeared to be in good condition, although psychiatrists have warned the mental scars could be longer term.

Among the first half-dozen out were Carlos Mamani, a 23-year-old Bolivian who was the only person in the group not from Chile, and Jimmy Sanchez, who at 19 was the youngest of the trapped men.

The oldest man in the group, Mario Gomez (63), became the ninth to emerge, fitted with a special mask to combat his breathing problems.

The men’s rescue marks the final stage of a record-breaking two-month drama, during which they awaited rescue at the bottom of the mine with the world captivated by their daily hopes and fears.

Pinera, whose short presidency had been totally consumed by the drama of the mine workers, said the operation was “without comparison in the history of humanity”.

He added all of Chile had learned from the miners “the value of faith and of hope, the value of comradeship and solidarity”.

Hundreds of relatives, who maintained an anxious vigil in a makeshift tent city that had sprung up at the remote gold and copper mine in the northern Chile desert, cheered and wept at each escape.

Avalos’s father, Alfonso, raised his arms in triumph before hugging his wife, his face creased with emotion as he exclaimed: “It’s a huge joy. I’m so happy.”

But then the hundreds of journalists covering the moment crowded around them, jostling so forcefully to get an interview they toppled the tent and trampled each other.

Extraordinary news
The miners have survived underground longer than anyone before them. For 17 days after the mine cave-in, they were all but given up for dead.

But then a drill probe found them and they were able to attach a note to it, announcing the extraordinary news that they were all alive and well.

They had survived by strictly rationing their food and water, and had found refuge in an emergency shelter.

Chilean officials have worked feverishly since to keep them alive, sending down food, and water as well as many comforts such as music. But many of the men are suffering skin conditions due to the humidity, while others have chest infections and blood pressure problems.

As the miners return to the surface, they leave behind dark isolation for a blaze of publicity normally reserved for movie stars or sporting heroes.

Chilean media reports suggest the men are anticipating lucrative book and film deals that may limit what they end up saying to the waiting news media. — AFP

Rage in the twilight of neoliberalism

Hardware stores prepare for release of Fifty Shades of Grey

Tensions soar as Iran warns US warship never to return