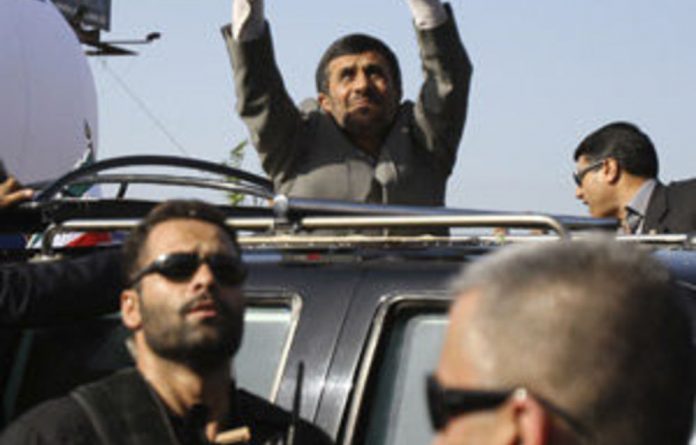 Iranian President Mahmoud Ahmadinejad basked in a rock-star welcome from Hezbollah’s Shi’ite loyalists on Wednesday, but his trip to Lebanon may offer only a brief respite from daunting challenges at home.

Many among the rice-throwing Lebanese crowds on the Beirut airport road will have benefited from the $1-billion or so that Hezbollah says it received from its Iranian sponsors for reconstruction after a 2006 war with Israel.

At home, Iranians often grumble that money their government lavishes on Lebanese or Palestinian militant groups would be better spent on alleviating their own hardships, set to worsen if Ahmadinejad keeps his word and slashes costly subsidies.

The feisty president, however, is not easily daunted. He may shrug off his expanding array of critics as long as he can count on the blessing of Supreme Leader Ayatollah Ali Khamenei.

Ahmadinejad, who survived a storm of popular protests after his disputed 2009 re-election, is under fire for his handling of economic problems caused in part by sanctions over an Iranian nuclear programme that he has aggressively promoted.

The West believes Tehran’s nuclear programme masks a drive to build atomic bombs. Iran says it has only peaceful purposes.

“The president has been playing a very high-stakes game with sanctions, first by almost daring the United Nations to impose them and then by pushing the line that the West cannot tolerate an independent, self-sufficient Iran, hence its rush to impose yet more sanctions,” said Gulf-based analyst Mohammed Shakeel.

“While this has arguably won the day for Ahmadinejad up to now, the adverse effects of sanctions will inevitably cost him politically since Iranians will begin to link their imposition to his personal belligerence,” he said.

Strain of sanctions
The damage done by sanctions is hard to quantify, but they have scared off many of Iran’s overseas partners, including its main petrol suppliers, constrained its ability to finance trade or import know-how, and raised the costs of doing business.

Ahmadinejad, who casts himself as a champion of the poor, now has to balance his former free-spending image with the need to reform food and fuel subsidies that cost Iran nearly $100-billion a year, or a third of gross domestic product.

Long-delayed action on phasing out the subsidies, due on September 23, has been postponed again in a possible sign that the authorities fear fuelling inflation and sparking social unrest.

A cash-strapped government might either devalue the rial and maintain subsidies, he argued, or scrap them and pump cash into poorer layers of the population, and “thereby enhance a certain form of class war by impoverishing the middle class even more”.

Ahmadinejad has vowed to soften the impact of subsidy cuts with cash handouts to the needy, but even hardliners fault him for vagueness on the timing and details of the reforms. However, there is no sign so far that economic discontent might revive the opposition movement that blossomed after the June 2009 presidential election, only to be cowed or crushed.

Losing friends
Yet Ahmadinejad has also alienated conservative groups such as merchants and clerics once seen as the bedrock of the Islamic revolution. Higher taxes have provoked bazaar strikes.

They say his claim that the executive, not Parliament, is supreme contradicts a famous dictum of Ayatollah Ruhollah Khomeini, the late revolutionary leader who saw the assembly as a defence against dictators such as the shah he ousted in 1979.

Even Ahmad Jannati, a hardline cleric who heads the Guardian Council and who has staunchly backed Ahmadinejad, has protested.

“The extravagance now under way in the [executive] apparatus is a sin and conducive to driving people towards immoral acts,” Kar va Kargar newspaper quoted Jannati on Sunday as saying.

Ahmadinejad, who has also drawn international opprobrium for saying that Israel should be wiped off the map and for querying the Holocaust, seems unperturbed.

His serenity may derive from the backing of Khamenei, Iran’s ultimate authority, who endorsed him after the election, and of the Revolutionary Guards, whose interests he has promoted.

Shakeel, the Gulf-based analyst, said the strength and mutual dependence of this trio meant Ahmadinejad was unlikely to give ground even to his establishment foes, although he would take care not to get on the wrong side of the supreme leader.

“For Khamenei to disown Ahmadinejad at this stage would be to raise questions over his initial judgement, a predicament the president is fully able to use to his advantage,” said Shakeel.

On Monday, Khamenei handed Ahmadinejad a victory over his moderate rivals in a long-running battle for control of Iran’s largest private university, decreeing that the endowment of the Azad University was “religiously and legally illegitimate”.

Some of the president’s conservative critics in Parliament have talked openly of impeaching him, but analysts say he is more likely to stay in power until his term ends in 2014.

“There is no challenge strong enough to bring Ahmadinejad down, simply because he is reliant on Khamenei, not on popular support,” said Nafisi, citing the post-election turbulence. – Reuters